What could have been a fatal situation has been rectified thanks to quick reporting, fast action and a few lucky breaks for one humpback whale near northern Vancouver Island earlier this week.

On May 18th a humpback whale was reported entangled in a prawn set that included 11 traps and several hundred feet of lead line in Knights Inlet, near Telegraph Cove, BC.  The whale, known to researchers and naturalists in the area as ‘Twister’, was entangled through the mouth with the line that leads to the buoy. The position of the entanglement and the weight of the gear, estimated to be 230 kg (500 lbs), was impairing the animal’s movement.  Fortunately for this humpback whale, the entanglement didn’t last long.  “A fisherman reported the entangled animal the morning after the prawn opening started” explains Doug Sandilands of Cetus Conservation and Research, who helped respond to the entanglement, “ the gear was likely only on the whale for 12-14 hours at most when he was first reported.”  Due to the prompt reporting by the fisherman a rescue effort was quickly coordinated by the BC Marine Mammal Response Network, a newly formed, collaborative program overseen by Fisheries and Oceans Canada that aims to assist marine mammals in distress and track threats.

The humpback’s luck didn’t stop there; not only was the report made quickly, but expertise was coincidentally nearby.  Officials and officers from Fisheries and Oceans and Cetus Conservation and Research were already in the area, near Robson Bight, where they were monitoring the recovery of equipment and a fuel truck lost from a barge into critical killer whale habitat in 2007.  With expertise close at hand, attempts to start disentangling the whale started that afternoon.  “Once the report was made, we started to assemble to specialized tools need for a rescue effort” says Lisa Spaven, coordinator of the Marine Mammal Response Network “we then chartered a plane to take it up to the north island, and it literally landed right where the response team was, near the whale.  Once the gear was there they started within minutes”.  By the evening nine of the traps and lead line had been removed from the encumbered animal.  Some line and trailing gear persisted and as darkness neared, large, bright colour buoys and markers were deployed on the animal to help rescuers relocate the animal the next day to remove what remained.

The following morning, Fisheries and Oceans attempted to find the animal, but with very little success.  Luck struck again for the whale, for just as the rescue crew was preparing to give up, the blow from the entangled whale was spotted in the distance.  The remaining gear was removed and the whale was able to swim free by approximately 9AM on May 19th.

Not only was crisis averted for the whale, but the rescue crew was also able to keep themselves safe.  “This is very dangerous to try to do, specialized training and gear are absolutely neccessary” emphasizes Spaven “No one should attempt to disentangle any animal without the expertise and gear required.  If someone sees a marine mammal in distress, they should contact the BC Marine Mammal Response Network as soon as possible.”  The formation of the Network allows a cohesive, organized and efficient response to marine mammal incidents in the province, but success depends on prompt and detailed reporting.  If you see a distressed marine mammal, call the 24 hour, toll-free hotline at 1800 465 4336.

By tracking incidents, the BCMMRN is learning more about threats to marine mammals, and issues like entanglements are being documented.  Last year, three different humpback whales were entangled in BC.  Member of the public can help reduce this problem by:

-Reporting all sightings to the BC Cetacean Sightings Network.  Knowing more about distribution and habitat usage by cetaceans and sea turtles will help researchers identify areas where the possibility of entanglement may be more likely.  Report your sightings here or by calling 1 866 I SAW ONE.

Want to do even more?
The BCMMRN is also recruiting volunteer primary responders to assist in marine mammal response efforts.  Several information and training sessions are being held in the next few weeks around southern British Columbia.  For more information about getting involved and upcoming training in your area contact Lisa Spaven at [email protected] or (250) 756 7230.  Upcoming training sessions: 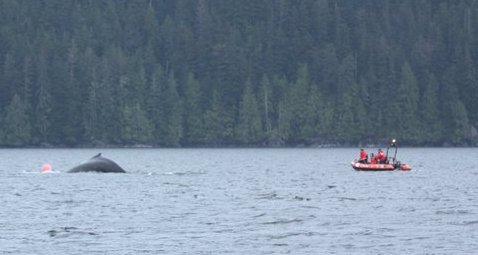