What does shopping have to do with sea turtles? It’s all about plastic.

A study published this year in the journal Marine Pollution Bulletin by researchers Nicholas Mrosovsky, Geraldine Ryan and Michael James concluded that about one in three adult or large leatherback turtles have eaten plastic. The authors looked at historical records of necropsies (animal ‘autopsies’) and learned that since the 1960s, more and more leatherbacks have been found with plastic in their digestive tracts. The main culprit: plastic bags.

The leatherback turtle is the largest sea turtle in the world. Leatherbacks can measure up to six feet long and four feet wide. They weigh an average of 400 kg; some have been recorded to weigh over 900 kg.  They can be found throughout the world, and are the most widely distributed reptile. Many people are surprised to find out that the leatherback turtle even travels to the cool water of British Columbia’s coast.  Unlike other sea turtles, that stick to warmer waters and are only seen as an ‘accidental’ species in BC, the leatherback travels to northern waters in search of its prey. Special adaptations such as dark skin colour, large body size, a thick layer of fat, and the ability to control blood flow to reduce heat loss likely enable the leatherback to thrive in chilly waters.  In British Columbia they can most commonly be seen between July and September. Globally, leatherback turtles are critically endangered. In the Pacific, they are nearly extinct.

Leatherbacks feed heavily while in northern areas such as Canadian waters to fatten up before migrating south to the tropics where they mate and lay eggs. Some migrate over 11,000 km every year between feeding and nesting grounds.  To obtain the fuel they need for these long journeys leatherbacks feed on jellyfish and zooplankton (microscopic animals that drift or swim in water).

Plastic bags floating in the ocean look similar to jellyfish.  Plastic also breaks down into tiny fragments that can drift alongside zooplankton. Leatherbacks can therefore accidentally consume plastic while they are feeding, mistaking it for a meal.

Turtles and other animals can suffer severe and even fatal consequences from eating plastic. The study’s authors explain that plastic can cause blockages in turtles’ digestive tracts and obstruct the passage of food. In some cases, this alone can cause the turtle’s death. Plastic in an animal’s digestive tract can also decrease the area from which it can absorb nutrients from its food. Not being able to get full nourishment can negatively affect an animal’s health and its ability to reproduce.

Plastic waste can enter the ocean from a number of sources, but according to Fisheries and Oceans Canada, 80% of it comes from land. As a stark example, the area next to the municipal landfill in St. John’s, Newfoundland is known as the Plastic Forest due to the enormous number of plastic bags that have blown into it and into the adjacent ocean from the landfill.

Our choices as individuals can help to protect leatherback turtles and other animals. In particular, we can do many simple things to reduce our use and disposal of plastic:

–  Reuse or recycle any plastic bags you do have. Reuse them rather than throwing them away. Clean them and drop them off in bag recycling bins at stores or at recycling depots.  Make sure your plastic bags will not be blown out of landfills and potentially into the water!

–  Reject packaging. Choose to buy items that have little to no plastic packaging. Buy loose produce and keep it loose rather than collecting it in plastic bags.

To further help the conservation of marine species in British Columbia, report your sightings of sea turtles or cetaceans here or by calling 1 866 I SAW ONE. If you see an animal entangled in plastic, call the 24 hour, toll-free Marine Mammal Incident Response hotline at 1 800 465 4336. 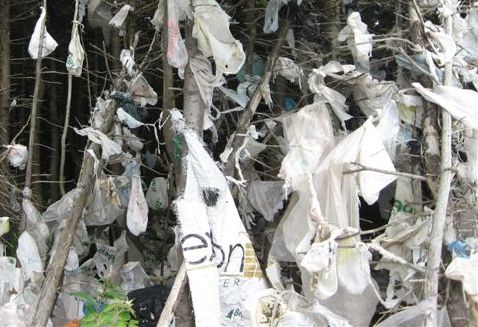