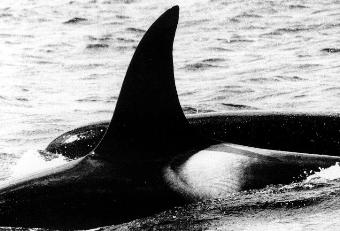 Can you imagine spending every day of your entire life with your mom?  For killer whales, the idea isn’t quite so strange.  Research in British Columbia over the past 30 years has revealed the incredible family bonds of resident killer whales and for these animals, living life beside mom is the norm!  These salmon-eating orcas live in matrilines, where neither female nor male offspring disperse from their mothers.  These matrilines are often made up of multiple generations, usually with an elderly female heading the family- which can be up to 22 whales. When the eldest female, the matriarch, dies, it is her daughters who create new matrilines with their own offspring.  However, a new situation observed and reported to the BC Cetacean Sightings Network this summer poses a new question regarding killer whale family dynamics.  What happens if the matriarch is left alone?

In early July 2009, as northern resident killer whales began to return to their core summer area of Johnstone Strait, a familiar whale appeared alone.  The whale, A12 (known as Scimitar to the Wild Killer Whale Adoption Program), was spotted in Blackfish Sound on July 5th by BCCSN observers Stubbs Island Whale Watching.   A12 is estimated to have been born in 1941, making her the second eldest female in the northern resident killer whale community.  She is known to have had three surviving offspring, two sons and one daughter.  While her eldest son died in 1997, she continued to have a good-sized family, with her son A33 (‘Nimpkish’), her daughter A34 (‘Simoon’), 4 grand-calves and one great grand-calf (see the A12 matriline family tree here)!  But this year, when she first was seen, none of her family was with her.  Why was she alone?

Several years ago, A12’s daughter, A34, with her own growing brood, began to spend less and less time traveling closely with her mother and brother.  As daughters become experienced mothers and grandmothers in their own right, their bond with their mother weakens.   While normally a daughter will continue to travel loosely associated with her mother until the elderly matriarch dies, sometimes, as in this case, the daughter and her family actually begin to travel separately.    Males on the other hand, stay close by and dependent on their mothers throughout their lives.  Throughout the past few years, as A34 and her family began to separate more often, A12 continued to travel closely with her son, A33.

Research conducted by Dr. John Ford and Graeme Ellis of the Pacific Biological Station has revealed a potential explanation for the tight-knit mother-son bond among resident killer whales.  Ford and Ellis discovered that resident killer whales share their salmon prey underwater.  In fact, 76% of the feeding events observed included sharing between at least two whales.  It is mothers that share most often with their offspring.  When she has no sub-adult offspring, she is most often sharing her prey with her adult son(s).   This supplement of extra food may be one of the reasons large males (likely with high calorie demands) stay close to mom throughout their lives.  Whether it is prey sharing, or other reasons that keep sons close to their mothers, it is known that they often do not thrive after their mother’s death.

Unfortunately, with the appearance of A12 alone, it is likely that A33 has passed away before his mother.  Her daughter, A34, had already been seen weeks earlier now travelling independently with her own family.  An unusual situation was now being played out, the head of a resident matriline was alone.

For her first week in the Johnstone Strait area Stubbs Island Whale Watching watched A12 navigate large loops through the area, often vocalizing.  But as additional matrilines, including her daughter’s, entered into the area she was often spotted associating with the other whales.  Interestingly, one of the matrilines she spent a large amount of time with this summer was the A36s.  This family of three brothers lost their mother 12 years ago and has no surviving sisters.  The A36-matriline males are likely closely related to A12, perhaps nephews, and are similar in age to her own son.  A12 was seen socializing, travelling and even resting repeatedly with these three.  At other times, she travelled alongside her daughter and grandcalves, or with other A-clan matrilines.

While it is common to have multiple families traveling and socializing together during the summer months in the Johnstone Strait area, it is thought that in the winter and spring, individual matrilines spend more time alone as they move into other, more remote areas of the coast and offshore waters.  What does this mean for A12?  Will she rejoin her daughter, the A36s, or spend the winter alone?  What does this mean for her survival?  Offspring rely heavily on their mother in resident killer whale societies, but this unique situation may help researchers better understand how much a mother relies on her offspring.

You can help researchers better understand killer whales and their social dynamics by reporting your killer whale sightings here.  Remember to include the number of whales spotted, the behavior, and group composition (calves, adult males, females).  If possible, take photos from at least 100m, to help with identification. 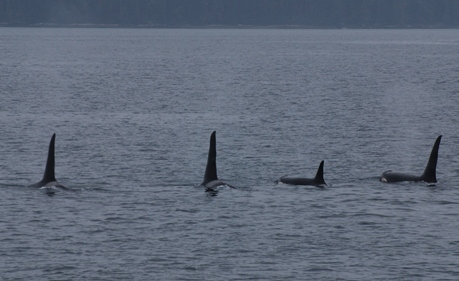