2010 has commenced with the release of a draft Recovery Strategy for one of the most endangered whale species in the world. The North Pacific right whale population is officially listed as ‘endangered’ under the Species at Risk Act (SARA) and presents one of the most challenging cases for recovery biologists in Canada. Foremost of these challenges: How to plan for a species that may or may not actually be present in western Canada? A confirmed sighting of a North Pacific right whale in BC waters has not occurred since 1970. While a limited number of sightings do still occur in the Bering Sea and Gulf of Alaska, animals that could potentially be traversing Canadian waters, this tiny remnant population in the eastern North Pacific may only be in the tens of animals.

The North Pacific right whale is one of three right whale species, including the Atlantic and Southern right whales. All three species were named for being the ‘right’ whales to hunt. Preferred by whalers because of their slow speeds, tendency to float once dead (making them easier for transport), and large yields of oil when processed, these whales were already considered ‘depleted’ by 1900. By 1935 the North Pacific species was protected, but little recovery occurred.

Historical whaling data indicates that the Bering Sea and Gulf of Alaska were traditional feeding grounds, and like other species of right whales, it is thought that the animals moved to more temperate climates in winter to breed. Their presence in Pacific Canadian waters was likely concentrated between April – October during migrations, and possibly for feeding. Right whales feed almost exclusively on copepods, a small zooplankton.

The original population of these animals was at least 11,000 animals (NMFS 1991), with some estimates closer to 37,000. With so few animals now remaining, biological limitations may be the greatest factor in their inability to rebound. The lack of knowledge on the remaining right whales makes it unclear what other threats may be affecting their survival, though ship strike, entanglement, noise and pollution likely affect this population.

To begin, the draft Recovery Strategy emphasizes the need to confirm the presence of any North Pacific right whales in Canadian waters. Only upon confirming their presence can researchers begin to assess other aspects necessary for protection and recovery such as population structure, habitat needs and anthropogenic threats to survival.

You can help with the recovery of critically endangered species like the right whale by reporting any and all of your sightings of whale, dolphin, porpoise and sea turtles to the BC Cetacean Sightings Network here or by calling 1866 I SAW ONE. Determining presence and distribution is the crucial first step on a long road to recovery for many cetacean and sea turtle species.

Fisheries and Oceans Canada will be accepting comments on this draft Recovery Strategy until February 21, 2010. Have your say in species at risk planning in Canada here. 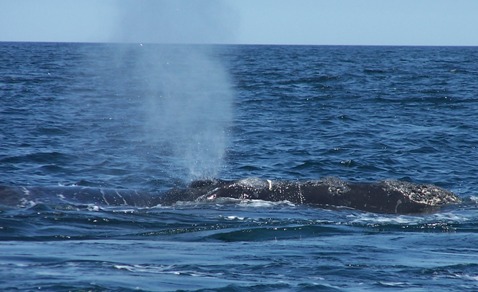