In early September 2009, the Canadian tuna fishing vessel ‘Old Salt’ was working off Washington’s Olympic Peninsula, just south of Vancouver Island.  With baitfish and albacore active all around them, the crew was shocked and surprised when a sea turtle appeared close by.  The animal, estimated to be about 6 feet long with long ridges running down its dark-coloured shell, surfaced several times before disappearing all together.  The turtle was a leatherback, the largest of the sea turtles, and one of a critically endangered population in the Pacific.

Not much is known about leatherback sea turtle occurrence in the north Pacific.  However, unlike other sea turtle species, their presence in waters off Oregon, Washington, BC and even Alaska is not thought to be accidental.  The animals that appear off the coast of North America belong to the western Pacific population that nests in Indonesia, Papua New Guinea, the Solomon Islands and Vanuatu.  They travel immense distances to our waters to feed on jellies, a staple of their diet.  Special adaptations such as dark skin colour, large body size, a thick layer of fat, and the ability to control blood flow to reduce heat loss likely enable the leatherback to survive the colder ocean temperatures of the north Pacific.

The immense decline of the global leatherback population in the last generation is largely due to anthropogenic threats.  Entanglement in fishing gear, ingestion of plastic debris, poaching of adults and eggs, destruction of nesting beaches and ship strikes have all contributed to the catastrophic collapse in leatherback numbers.

In order to better understand the research and recovery efforts needed to protect these vulnerable animals in British Columbia, a recent technical report of baseline leatherback sightings data was published this winter by Fisheries and Oceans Canada.  This report, Occurrence of leatherback sea  turtles (Dermochelys coriacea) off the Pacific coast of Canada, 1931-2009, first-authored by Lisa Spaven, summarizes the 119 leatherback sightings gathered since 1931 by DFO and the BC Cetacean Sightings Network.

As described in this technical report, the first recorded sighting of a leatherback sea turtle in British Columbia was in Nootka Sound in 1931.  Since then, sightings of leatherbacks have been recorded in almost all regions of the coast, though the majority (71%) have occurred off the western -most coasts of the province.  The appearance of leatherbacks in BC is likely ‘seasonal’; 81% of all the sightings occurred in the summer between July and September, with August having the highest number of reports.  This seasonality of sightings is likely linked to warmer water temperatures and increased up-wellings which would increase jelly abundance.

The huge geographical distribution and small population of Pacific leatherbacks means that obtaining large amounts of data on these animals is very difficult.  Between 2002 and 2008, Fisheries and Oceans Canada conducted 21 ship based cetacean and sea turtle surveys along the BC coast.  In the 2040 hours of survey time, only 3 leatherbacks were spotted.  The report acknowledges that infrequent sightings lead to significant knowledge gaps, which poses a challenge when attempting to determine appropriate recovery actions.

To continue amassing knowledge on the abundance and distribution of leatherback sea turtles in British Columbia, the help of volunteer observers is necessary.  The report underlines the necessity of continuing opportunistic data gathering through the BC Cetacean Sightings Network—if you see a leatherback report it here or call 1 866 I SAW ONE as soon as possible!

To read the complete report, check here or request a copy through [email protected] 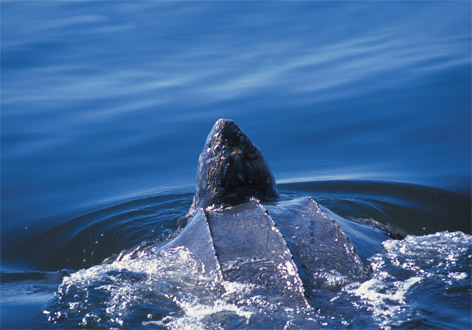 A dark shell with prominent ridges makes the leatherback easy to distinguish from other sea turtles.