Back in 1946 in the movie “It’s a Wonderful Life,” Sam Wainwright invited George Bailey to join him in a burgeoning industry – plastics. Sam knew what he was talking about. I’m looking around me at my food packaging, the pots I have plants in, my worm composting bins, the pen I wrote this with, the computer I’m typing it into – they’re all made of plastic! Heck, I even have plastic in my clothes. It’s everywhere – including in the ocean.

The BCCSN posted an article last year about sea turtles and plastic. This year, California-based researchers Jeff Jacobsen, Liam Massey and Frances Gulland published an article in the journal Marine Pollution Bulletin about the death of sperm whales due to the ingestion of marine debris, much of it plastic.

A dead sperm whale was found on a beach in California in February 2008, but there were no external clues as to why it had died. When the necropsy team cut open its abdomen, they saw that a large amount of compressed fishing net was poking through a hole in the whale’s stomach. There was also evidence of internal bleeding. This led the researchers to believe that the netting caused the whale’s stomach to tear open. Its stomach contained more than 24 kg of debris (more than the allowable weight of a checked suitcase on an airplane!).

Another dead sperm whale was found in California the following month. It appeared to be malnourished, and scarred following entanglement in fishing line. Inside its stomach was 74 kg (approximately the weight of an adult human female) of netting, line pieces and plastic bags. After seeing how much of the stomach was blocked and impacted by this debris, the researchers concluded that the whale died of starvation.

Much of the netting recovered from the whale’s stomachs appeared to be pieces that were thrown away during repairs. Net types included bait, gill, shrimp trawl and fish trawl, and some may have been in the ocean for 20 years or longer. Because of this variety and age, the researchers presume that the whales did not swallow them while preying on fishers’ catches, but rather ate them near the ocean’s surface. Pieces of discarded net likely gather masses of prey over time, and mimic a food source for whales.  As sperm whales are thought to eat their prey whole, the net would have been ingested along with the prey species it had ensnared.

The fate of these two whales is sad evidence of the impact humans can have on marine wildlife, particularly due to our use and disposal of plastic.

What You Can Do:

It can be a challenge to eliminate plastic from our lives entirely, but here are a few tips that can help each of us to reduce our individual impact:

-Reduction comes first. Avoid using plastic bags. Remember to carry a cloth bag whenever you think you might go shopping. Don’t bag your produce if it’s not really necessary.

-Reuse or recycle any plastic bags you must use.

-Choose to buy items that have little to no plastic packaging.

-Don’t leave waste at the beach or in the water.

-Collect all scraps when repairing nets; don’t let any escape!

-Gather any debris you come across while boating – you may save a whale’s life by doing so!

Two sperm whales were found in 2008 in California with significant amounts of plastic in their stomachs which may have contributed to their deaths. 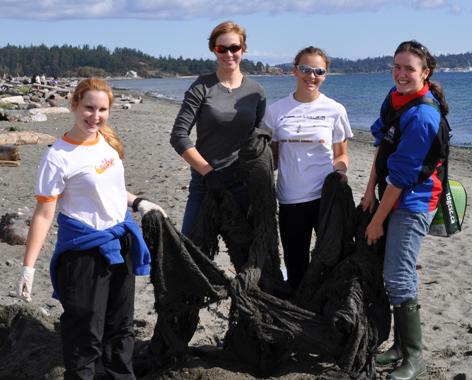 Participants in the Great Canadian Shoreline Clean-up remove net debris from beaches. Get involved in this national event in September 2010.