From the field #2: Bubble nets!

We stopped in at Namu today to take a quick break from whale spotting and to have a peek at the old cannery and town site. A fish processing plant and cannery was established here in 1893 and continued operations until the late 1980s! While the town site is now quiet and mostly abandoned, save for some caretakers, the biological activity in the harbour was alive and well. Salmon were leaping clear of the water and birds were foraging all around us as we peered through binoculars at the old buildings that offer an interesting glimpse into the history of the central coast. Our quiet pondering of the past was interrupted when a loud and distinguishable ‘whoosh’ came from nearby. Humpback whale!

Humpbacks have made an incredible comeback in the past few decades (see story here) and our days on the water this week aboard the M/V ‘Skana‘ have proven that at this time of year they are the most plentiful cetacean along this section of coast. Humpbacks visit British Columbia usually between May and October to feed in our cold, rich waters. Humpback prey consists of krill and small species of baitfish such as herring, pilchards, and sandlance. Of course, being such a large whale, humpbacks need to eat huge quantities of this small prey in order to fill themselves. To ensure they are engulfing large amounts of prey with each feeding lunge, humpback whales concentrate their prey in a small area. As we shifted our focus from Namu to the whale, it showed us one of the amazing ways humpback whales do just that!

After watching the whale dive we began to notice an interesting disturbance in the water nearby. It looked as if the ocean was boiling in one small spot. What was going on? It suddenly dawned on me; the whale was bubble net feeding!

Bubble net feeding is a technique used by humpbacks to concentrate their food. The whale (or whales, as in some areas, particularly south east Alaska, large groups will use this technique as a team) blows bubbles from its blow hole in a circle pattern around a school of fish. As the bubbles rise, they create a wall around the school. The whale may continue to blow bubbles, spiraling inwards, making a tighter and tighter circle. The school then starts to condense as a response to the bubbles surrounding them, concentrating the school into a nice tight ball. In the Namu harbour, as we watched the circle of bubbles rise, we began to see the small fish breaking at the surface. This bubble net appeared to be working well! Just at the pivotal point, with bubbles and fish splashing frantically, up lunged the humpback, enormous mouth agape! We could see the baleen hanging from the whale’s top jaw, and the long pleats on its throat open forming the whales lower jaw into a huge scoop. As the whale began to sink once more under the surface, its mouth closing, we could see the salt water being pushed out through the baleen, ensuring that the whale was only swallowing the entrapped fish, and not the thousands of litres of salt water it had also taken in during the lunge. Spectacular!

For the next twenty minutes we continued to watch the whale as it fed in this manor around the harbour, ensuring that the ‘Skana‘ was at a good distance not to disturb the ‘net’ or the hard working whale. Bubble net feeding is not seen in many southern areas of British Columbia, so all of us aboard were awe-struck.  What a treat to see!

You can help us with our cetacean survey around the coast of BC this summer by reporting your sightings of whales, dolphins and porpoises. Report online here, via email at [email protected], or by calling toll-free 1 866 I SAW ONE.

Check in next week for more news ‘From the Field’. 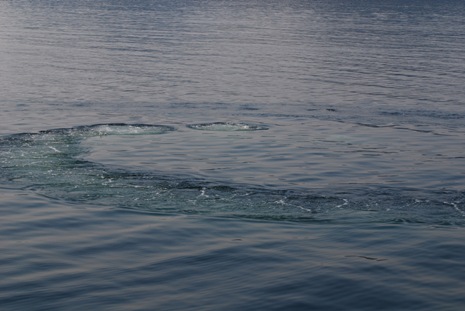 A bubble net as seen from the surface. 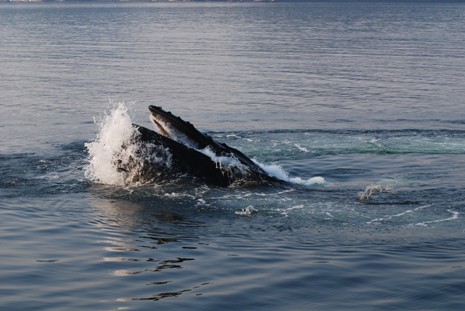 Mouth agape, the humpback lunges through the fish concentrated by it's bubble net.