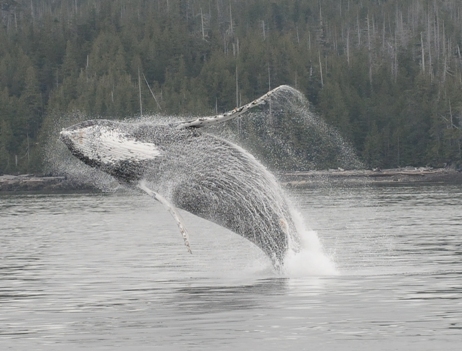 It had been a long day on the Skana, and much of it was spent slowly moving through fog. There had been no cetacean sightings and the hydrophone was quiet all day.

The fog finally lifted as we stopped the boat at the south end of Fitz Hugh Sound to make some dinner. Almost as an afterthought, we again dropped the hydrophone to listen in on the underwater world. We were in for a surprise!

The sounds came in intermittently at first. Was it killer whales? No, the sounds were too sustained and complex to be killer whales. We soon realized that what we were listening to was in fact the song of a humpback whale! Have a listen:

We scanned the horizon with binoculars but we couldn’t spot the singer. This isn’t entirely surprising as humpbacks are known to hang almost stationary in the water about 20 metres under the surface as they sing. Humpback whale songs are only made by male humpbacks. The common belief is that males sing to attract a potential mate. However, singing may also be a way for males to compete with each other or to establish social ordering.

Until recently, it was thought that humpbacks only sang during the winter months spent in calving areas such as Hawaii and Mexico. However, in the past few years hydrophones have captured humpbacks singing off the B.C. coast. The exact reason why the humpbacks are singing off our coast is a mystery.

Are males simply practicing their song before they head to warmer waters for the winter? Or, with increased numbers of humpbacks spending their winters off the coast of B.C., are they trying to attract a mate or establish a hierarchy in B.C.’s cold but food-rich waters? More research needs to be done to try to understand this exciting development.

Whatever the reason, it was a remarkable end to a long day on the water—a reminder that you never know what you might find– or hear–when you’re out in the field!

To better understand the population and behaviour of humpback whales on the B.C. coast, researchers need your help!  If you spot them anywhere, please report your sighting here or call, toll-free 1-866-I SAW ONE (472-9663). 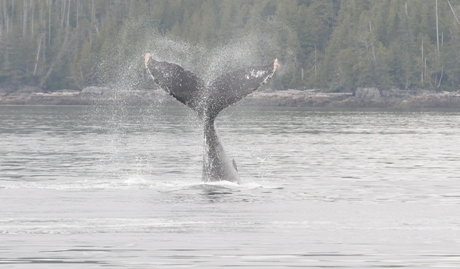 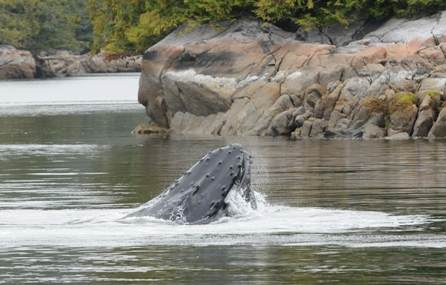