From the Field #5:  Rethinking harbour porpoises

Ok, ok.  It’s time for me to admit it isn’t summer anymore.  But early-October presented another opportunity to spend time on the ‘Skana’ looking for whales before the weather deteriorates too much.  The ‘Skana’ and crew spent most of the summer on the central coast, but with fall in full swing, it was time to bring the boat back down to Vancouver.  Of course, en route, I had my eyes open for any cetaceans and even stopped in to chat with some local guides that participate in the Sightings Network.

Cruising down island, we decided to take some of the smaller channels to avoid the high winds in lower Johnstone Strait.  The glassy water and clear skies made for excellent sighting conditions and as we rounded the bend into Wellbore Channel, we could see bursts of ‘rooster-tail’ type splashes ahead.

‘Rooster- tail’ splashes are usually a characteristic of the speedy Dall’s porpoises.  These little black and white animals can reach up to 55km/hr in quick bursts.  As they surface at this speed, they often throw an arc of water behind them.   Upon seeing exactly this, I automatically assumed that up ahead was a group of Dall’s.  But this coast is full of surprises, and it turns out, I was wrong.

Upon closer inspection, instead of the striking black and white markings and chunky body of a Dall’s porpoise, the animals causing all the splash were brownish-grey, small in size and had a triangular, uniform-coloured dorsal fin.  These were harbour porpoise!  What a surprise! I had never seen this species act like this before!  Lesson learned, always take a good look when identifying a small cetaceans and don’t make assumptions!

Harbour porpoise are usually one of the most elusive of the common cetaceans found in BC.  Their small size and (normally) inconspicuous behavior means that they are often overlooked.  They are regularly seen alone, or in small groups, and rarely show much surface active behavior.  What we were seeing was exactly opposite of the usual harbour porpoise sighting!  There was up to 10 animals present and all were swimming quickly, throwing tons of splash right in a set of tidal rapids.  As we stopped the boat close by, we could hear their loud exhalations as they zipped around, frequently in pairs.

So what were they doing?  As reported in an earlier news story, active groups of harbour porpoise are sometimes seen in spring and fall in tidal eddies.  “We believe they are foraging on small schooling fish”, says Anna Hall, a harbour porpoise researcher at the University of British Columbia.  The tidal rapids in Wellbore Channel may concentrate prey, making it an excellent spot for small cetaceans to forage.  The quick surfacing in pairs may also have been social behavior among the animals.

Harbour porpoise are currently listed as a species of ‘Special Concern’ under the Species at Risk Act (SARA) in Canada. As their name suggests, harbour porpoise prefer shallow waters close to shore, but this habitat is becoming increasingly urbanized and contaminated along our coastline, particularly around larger cities and towns.  To best protect these animals, it’s crucial to better understand their habitat preference and learn more about their social structure.

This unusual sighting from a normally cryptic animal had me grinning from ear to ear.  Watching the animals dart to and fro in the sunlight, in a way I had never seen before, reminded me of how much there is to discover about the cetaceans on our coast.  While the summer field season may be over, it’s incredibly important to learn about these animals year round.  If you spend time on or near the water in the fall and winter, you can help with this.  Let us know what you see during these colder months.  Reports of whales, dolphins, porpoises and sea turtles to can be reported via web form or phone (toll-free) at 1 866 I SAW ONE (472 9663). 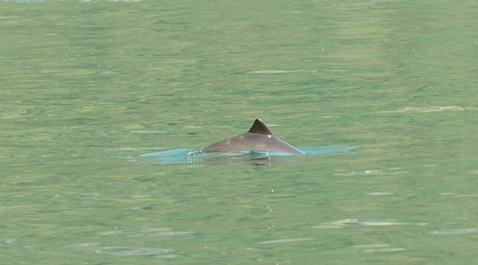 Upon closer inspection, the active animals turn out to be harbour porpoise!