In mid-January, it is hard not to reminisce about the days of sun, good weather, and time on or near the water.  BCCSN observer and volunteer Anuradha Rao spent last August working with the Robson Bight Marine Warden Program in Johnstone Strait.  She shares the details of her days monitoring whales and vessels  in the diary below.  Remember, by reporting your sightings to the BC Cetacean Sightings Network, you also act as a monitor, helping researchers better understand B.C.’s diverse cetaceans.

I think I hear the ocean breathing. My tent is on the lichen-covered rocks at the water’s edge, surrounded by salal and wild roses. I poke my head out the door in time to see a large, triangular fin break the surface. Its blackness is in sharp contrast to the silvery waters of Johnstone Strait. Two orcas are swimming past me, maybe 100 m from where I slept. It is their breath that has awoken me.

I’m staying at Boat Bay on West Cracroft Island, volunteering with the Robson Bight Marine Warden Program operated by Cetus Research & Conservation Society. My nine-to-five job is to stand on a cliff and monitor killer whales and boats in and around the Robson Bight (Michael Bigg) Ecological Reserve. My commute is a one-hour hike through a mystical forest. In these woods, I am humbled by ferns taller than me, and trees whose tops are too high to see. The fog creeping among the tree trunks creates a vista so surreal it cannot be photographed. Other than me, two volunteers and one staff member are making our way along the trail, there is no trace of human beings.

I emerge from the trees onto the cliff, aka ‘Eagle Eye’, and am surrounded by mountains overlooking Johnstone Strait. On a foggy day, I feel as if I am standing upon the clouds. Only the mountaintops emerge. As the fog lifts, my eagle eye perspective shows me a vast area, in the middle of which is Tsitika River estuary and the Ecological Reserve. Just east of the estuary are the rubbing beaches, where the northern resident killer whales rub their bodies along the rocks for reasons scientists are still unaware of.  This area is deemed ‘critical habitat’ for this threatened population of fish eating killer whales.  I can hear the whales singing in the hydrophone submerged near the beaches. I also hear another sound – dozens of boat motors. We have left the isolation of the land to come upon a marine highway. The sockeye run this year is likely the best since 1913 and the fishing boats are plentiful. Also traveling just outside the Reserve are numerous private yachts, transport barges and enormous cruise ships – several of each every day, throughout the day.

The Warden Program consists of observers stationed both on the cliff and on the water. Their job is to monitor the activity of whales and boats in and around the reserve and request that mariners transit outside of the reserve boundaries. They monitor boat activity around whales, educate private boaters about the ecological significance of the area and whale watching guidelines, and guide those boaters to avoid disturbing the whales. They also participate in killer whale identification, which helps track habitat use and population dynamics.

Robson Bight (Michael Bigg) Ecological Reserve was established in 1982 after pressure from citizens to protect the important habitat it contains. Its primary purpose is to protect significant killer whale habitat. The Tsitika estuary also contains important fish and invertebrate habitat, and is the only undisturbed estuary on the east coast of Vancouver Island. Up to 70% of Fraser River salmon travel through the area. Five species of Pacific salmon, plus steelhead and cutthroat trout, Dolly Varden and herring use spawning grounds in and around the river.

Participating in the Warden Program helped me to learn more about the value of monitoring and reporting on wildlife and human activity, and how they interact. It was also an unforgettable opportunity to contribute to non-invasive cetacean research and conservation. 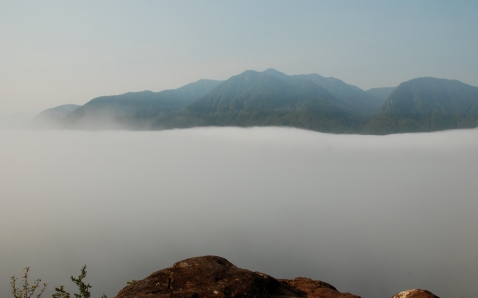 Looking out at the fog from the cliff at 'Eagle Eye' 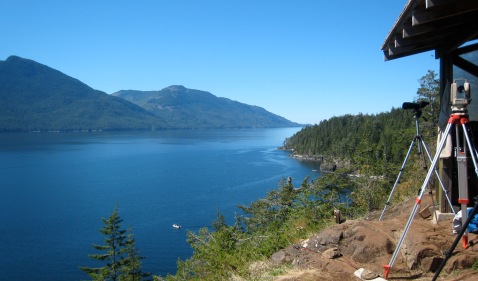 View from the cliff 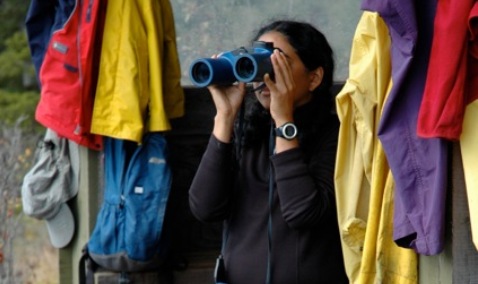 Anu at work on the cliff 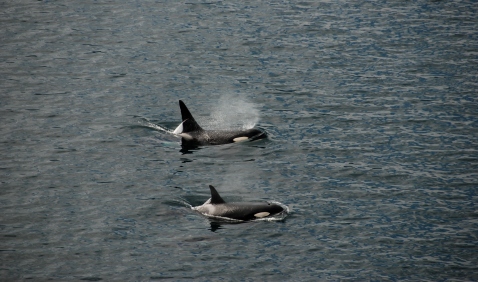