A recent paper published in Aquatic Biology by Dr. John Ford and colleagues has provided fascinating insight into the feeding habits and dietary preference of offshore killer whales found in the northeastern Pacific Ocean.

Since the 1970’s scientists have been aware of the distinctions between resident and transient killer whale populations here in BC.  The two groups are reproductively isolated, genetically distinct, and acoustically unique lineages.  It wasn’t until the late 1980’s that a third killer whale population, dubbed the “offshores” due to their tendency to be found in the waters of the outer continental shelf, was discovered.  While it was determined that they were a distinct lineage from the residents and transients, their distant geographical range makes these whales hard to study and little is known about their diet and social structure.  Learn more about offshore killer whales here.

To produce resident, transient, and offshore populations, ecological adaptation is necessary to reduce competition among the different lineages.  When a group becomes specialized to hunt certain, distinct prey, survival will be higher for all three types of whales.  Killer whales in the Pacific Northwest have adapted to occupy different ecological niches by relying on varying food sources, residents eat fish (primarily salmon), transients eat marine mammals, but until now, it was not clear what offshore killer whales ate.

Scientists have long since suspected that offshore killer whales were preying on sharks.  Biopsies of offshore blubber analyzed for fatty acids, stable isotopes and persistent organic pollutants (POP’s) supported a diet of “a long-lived fish relatively high in the food chain”, and sharks seem like suitable candidates.  Offshore killer whales have also been observed travelling in large, dispersed groups (50+ animals) that are highly vocal.  This type of behavior is commonly seen in other piscivorous (fish eating) killer whales.  Severe tooth wear has also been noted repeatedly in offshore killer whales found dead or stranded, likely caused by rough-skinned prey, like sharks.

In this study, two encounters with offshore killer whales during multiple predation events were detailed, one in 2008 and another in 2009.  Tissue samples collected at the kill sites were determined to be Pacific sleeper shark (Somniosus pacificus) through DNA analysis.  These findings are exciting for the cetacean research community as it supports the first confirmed prey species of offshores based on field observations and foraging.  It is also the first record of the genus Somniosus as prey for killer whales.

While in the field, the authors observed that during a kill the offshore whales would dive steeply to considerable depth where predation and consumption would take place.  Most of the whales were underwater simultaneously and eventually an oil slick would become visible on the surface and pieces of tissue also floated up from the depths.  This tissue was soft and oily and presumed to be shark liver.

Sleeper sharks are common to the North Pacific continental shelf, which is known offshore killer whale habitat.  There are also abundant blue sharks, salmon sharks and dogfish in this area.  Sleeper sharks are a large species reaching an average length of 2m and are found in the water column at depths similar to that at which killer whales can dive.  They also have large, lipid-rich livers to help them control buoyancy at depth.  This liver can be up to 80% of a shark’s weight!  This would be a substantial, high energy food source.  Similarly, the authors point out that resident killer whales prefer Chinook salmon for its size and high caloric content.

The paper also investigates the state of tooth wear in offshore killer whales compared to residents and transients.   They found that the teeth of a mature offshore whale are often worn all the way to the gum line, exposing the pulp cavities.  On the other hand, tooth wear in a resident or transient whale is negligible, even in older individuals, likely due to their diet of soft-bodied fish, pinnipeds, and cetaceans.  So what exactly, is causing the destruction of the whales’ teeth?  The authors suggest that tiny dermal denticles (the shark version of fish scales) embedded in the shark’s skin are the likely culprit.  In fact, thousands of years ago shark skin was used to smooth and polish bone, just like modern sandpaper.

Interestingly, if older whales cannot hunt and kill because their teeth are so worn down, it is likely that younger animals (whose teeth are more intact) make the kills. Food sharing and provisioning may be necessary among any group of offshore whales.  Prey sharing has already been observed in resident killer whales.

The field observations, prey sample analysis, and extreme tooth wear in offshore killer whales presented in this paper reveal solid evidence that shark species make up a significant portion of an offshore killer whale’s diet. However, previous examination of offshore stomach contents has revealed other fish species; therefore it is possible that they are not exclusively shark feeders.   As is the trend in science, one questioned answered often leads to several more; and in the case of offshore killer whales, there is further research needed to determine their degree of prey specialization and the importance of sharks as a food source.

To read the entire paper, read it here. 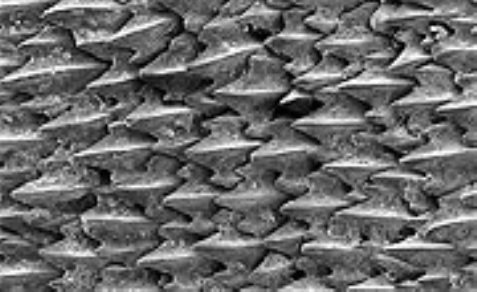 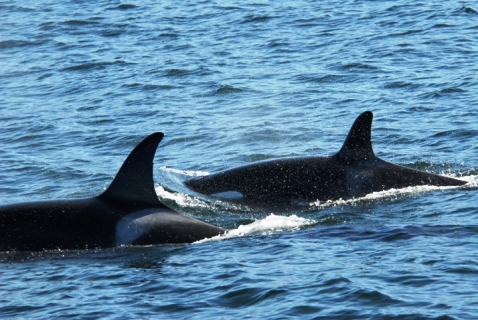 A pair of offshore killer whales sighted off the BC coast.