While the start of spring is usually associated with flowers, longer days, and warmer weather, on the BC coast, it also signifies the return of the grey whale!  Indeed, the Sightings Network started receiving reports of these barnacle-encrusted creatures the first week of March and it hasn’t let up!  Have you seen one?  Report it here.  While some of these animals will spend their spring and summer in BC waters, many of them are just passing through on one of the longest migrations of any mammal.

This migration takes the whales from Baja Mexico, where they give birth, to the food-rich Bering Sea to feast. This round trip can be up to 18,000 km each year and is usually broken up by many stops along the B.C. coast as they snack to sustain themselves on their way to the Arctic!  While the waters of Baja may be warm and beautiful, they are nutrient-poor, and many of these animals have had little to eat over the winter.

At this time of year, herring spawn is a major food source for these hungry whales.  Grey whales also feed on tiny organisms (like crab larvae and copepods) in the bottom sediment, so it is very common to see them in shallow waters, close to shore. They feed by gulping large mouthfuls of mud and strain out the sediment and water through their baleen plates. From the surface, it’s common to see the whales thrashing around close to shore, rolling on their side, and surfacing erratically- almost as if they are stranded.  While this may look concerning, it is actually normal feeding behavior!

Grey whales migrating through BC coastal waters usually travel along the western shore of Vancouver Island before continuing north, often making short stops around Haida Gwaii, on their way to the Bering Sea.  However, over the past few years, more and more observations of grey whales traveling up the eastern side of Vancouver Island have been reported.  Grey whales made the news around the Lower Mainland last year when animals were spotted in urban waters around Vancouver, Sechelt and Squamish.

Grey whales also made international headlines this year, when ‘Flex’, a tagged grey whale and member of the endangered western Pacific population, shocked researchers with his travels.  Flex is one of only 130 animals in the western population and was tagged by Oregon State University in October on his feeding grounds near Russia.  Previously, it was thought that western grey whales like Flex likely traveled to an unknown calving area on the western side of the Pacific.  However, Flex surprised everyone by actually travelling east, towards North America, passing Alaska, BC, Washington and Oregon before his tag stopped sending satellite signals in February.  Further investigation into grey whale photo identification catalogues on this side of the Pacific revealed that ‘Flex’ had visited before!  To learn more about ‘Flex’, his surprising route, and the research being done by Oregon State University, see here.

While the eastern grey whales that are most commonly spotted travelling past BC are doing better than their western counterparts, they are still listed as Special Concern by the Species at Risk Act.  Among other anthropogenic threats, marine debris is likely an issue for these animals.  Because they feed along the bottom of the ocean, they may ingest large amounts of sunken garbage.  Last year, a dead grey whale in Puget Sound, Washington was found to have plastic bags, small towels, surgical gloves, sweat pants, plastic pieces, duct tape and a golf ball in its stomach chambers.  You can help by participating in the Great Canadian Shoreline Clean-up this year.  Learn more about the issue of marine debris here. 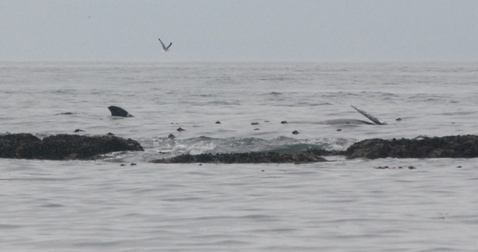 Grey whale feeding on the west coast of Vancouver Island.