A Word on Harbour Porpoise

In the early afternoon on April 26, the Vancouver Aquarium and Fisheries and Oceans Canada received word of a sub-adult male harbor porpoise that had been repeatedly stranding near Ganges on Saltspring Island.  Members of the Aquarium’s Marine Mammal Rescue Team were dispatched to retrieve the animal along with the Canadian Coast Guard who rushed the little porpoise aboard a hovercraft from Saltspring back to the Aquarium’s marine mammal rehabilitation center.  Dubbed ‘Siyay’ after the Coast Guard hovercraft, his arrival has been followed by a 24 hour watch by dedicated staff and volunteers.  Vancouver Aquarium veterinarian, Dr. Martin Haulena explains that “Siyay is in stable condition, although he does suffer from several conditions including pneumonia, parasites, and gastric ulcers”.  He is also underweight, very weak, and struggles to swim on his own without the aid of a custom made sling to support him in the water.  Haulena also notes that there is only a 10% chance of survival for cetaceans rescued from stranding, but despite these odds, everyone has their fingers crossed for Siyay’s recovery.  Check out a video of Siyay’s rescue here.

This isn’t the first time the Vancouver Aquarium has cared for a harbour porpoise.  In August 2008, Fisheries and Oceans Canada officers rescued a month-old stranded female harbour porpoise near Victoria and brought her back to the Marine Mammal Rescue facility.  This juvenile female surprised everyone and responded well to expert health care and husbandry.  However, given that she was rescued as a very young and dependent calf she was not deemed an appropriate candidate for release. ‘Daisy’ now resides at the Aquarium where she receives constant care and enrichment from marine mammal staff.

From a global perspective, porpoise species are few and far between, and many face threats to their survival from habitat loss and entanglement in fishing gear.  There are only six species of porpoise found in the world’s oceans, and BC boasts two of them!  The speedy Dall’s porpoise is common in our waters, and can be recognized by distinctive black and white marking on their dorsal fins, tails, and flanks.  They are strong, chunky creatures and can swim up to 55km/hr!  The second porpoise species is our elusive harbour porpoise, BC’s smallest cetacean.  Many people are unaware of this animal as they tend to lead inconspicuous lives, hang out solo or in small groups, and shy away from boats.   They move in a slow, “rolling” type fashion and don’t leap out of the water the way dolphins do.  For these reasons, harbour porpoise tend to get overlooked and little is known about them.

Harbor porpoise were once common throughout the Pacific Northwest but over the past 20-30 years, their numbers have been declining.  We know that in some areas, especially those that have been highly urbanized, harbour porpoise populations have decreased.  Some theories propose this downward trend in their numbers may be due to increased development and boat traffic, sound pollution from human activities, or incidental catch of porpoise in fishing operations.  Lisa Spaven, Marine Mammal Response Biologist with Fisheries and Oceans Canada, explains that in 2010 45 harbour porpoise were reported dead, of which 35 were examined and 28 necropsied.  There were also two stranding events in late spring and summer both off south east Vancouver Island.  25% of these stranded harbour porpoise were confirmed dead from predatory attack, while others presented dead due to unknown trauma, infection, malnourishment, and incidental catch.

As a species listed as ‘Special Concern’ under Canada’s Species at Risk Act, it’s important to learn more about where these animals are found, and which habitats are attractive to them.  Scientists Anna Hall and Carla Crossman of the University of British Columbia are focusing their studies on the harbour porpoise.  They suggest that certain areas on the Southern BC coast are crucial for feeding, breeding and calving for harbour porpoise, and are conducting research using genetic techniques to help determine their population structure.  While harbour porpoise remain a rather elusive and mysterious creature, animals like Siyay and Daisy help us to better understand them in conjunction with current research on wild harbour porpoise.  You can help us learn more about harbour porpoise in BC by reporting your sightings of this creature!  Report online here or call 1-866-I-SAW-ONE. 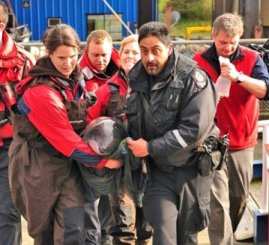 Siyay being transported from the hovercraft up the dock to the Marine Mammal Rescue Center. 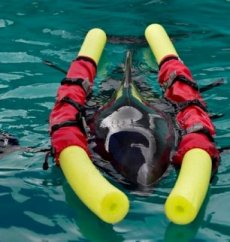 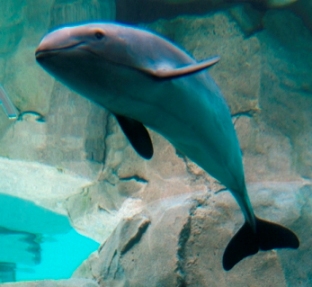 Daisy at home at the Vancouver Aquarium