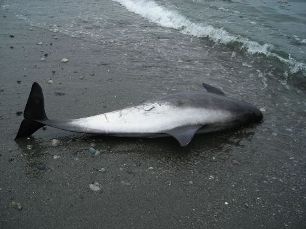 On May 21st 2011, US authorities were called to investigate a stranded, dead porpoise on the south end of San Juan Island; but this was not an ordinary porpoise.  It had markings unlike those of a harbour porpoise or a Dall’s porpoise and it was quickly determined that this animal was a naturally-occurring hybrid porpoise!  That is, a cross between a harbour porpoise and Dall’s porpoise.  This in itself is rare but what was especially exciting about this animal was that she was pregnant, with a full-term fetus!

For over a decade, there have been a handful of photos and sightings of calves travelling with female hybrids along the BC coast which indicates adult female hybrids are fertile.  This is surprising because hybridization can result in genetic defects that are lethal in-utero, or hybrid offspring are born healthy yet sterile and unable to produce their own young.  Whether male hybrid porpoise are fertile or sterile is unknown.  Necropsy of this pregnant female did not reveal the cause of death but genetic testing is underway to determine the parentage of the fetus.  Did the female breed back with a fellow Dall’s porpoise?  Or did she mate with a harbour porpoise?  The fetus seems to exhibit coloration similar to that of a harbour porpoise.

In the case of porpoises, it appears as if mating occurs between female Dall’s porpoise and male harbour porpoise.  Hybrid calves are always observed with their Dall’s mothers and display behaviours characteristic of Dall’s porpoise.  But why is the maternal parent always a Dall’s porpoise?  Differences in mating strategies between the males of each species offer a possible explanation.  Male harbour porpoise are quite promiscuous and ensure their reproductive success by mating with as many females as possible.  In fact, during the breeding season, their testes enlarge to as much as 4% of their body mass – one of the largest testes to body size ratios in the animal kingdom!  On the other hand, male Dall’s porpoises exhibit “mate-guarding” of breeding-age females.  This way, he protects his paternity by being the only male to mate with a particular female (Willis & Dill, 2006).  The indiscriminate libidos of male harbour porpoise who attempt to mate with as many female porpoises as possible, no matter what species they are, may very well be the driving force behind porpoise hybridization in British Columbia.  A study by Willis et al in 2004 estimate that hybrids make up 1-2% of the Dall’s porpoise population here in BC!

Harbour porpoise mating tactics are not the only cause of hybridization in BC waters.  Harbour porpoise populations in southern BC have declined in the past 60 yrs, possibly due to their sensitivity to habitat disturbance resulting from human development.  Male harbour porpoise may be mating with female Dall’s porpoise if females of their own species are few and far between.  The fact that most reports of hybrid porpoises are from southern British Columbia, where high population densities are directly affecting harbour porpoise habitat, certainly supports this theory.

Interestingly, porpoise hybridization is not the only type of inter-species mating to occur among cetaceans – and furthermore, who can produce viable offspring of their own.  In 1986 a large, pregnant, female baleen whale was caught in Icelandic waters. The animal had morphological characteristics of both the blue and the fin whale and genetic analysis revealed the whale was a hybrid between a female blue whale and a male fin whale.  Similar analysis of the fetus showed that it had a blue whale father (Spilliaert et al, 1991).

It can be difficult to tell just by looking an animal if it is a hybrid or not, as both harbour and Dall’s porpoise may have variation in their colouration.  This unique chance to investigate a dead animal will definitely bring new insight to the hybrid-phenomenon!  Researchers are trying to better understand porpoise hybridization – and you can help.  If you see an odd-looking porpoise (or any other whale, dolphin, or porpoise) please report your sighting to the B.C. Cetacean Sightings Network by phone (1 866 I SAW ONE), email [email protected], or through our web entry form. We’re also very interested in any photos of these animals.  If you observe a dead, injured or distressed marine mammal, please call the Marine Mammal Response Network. 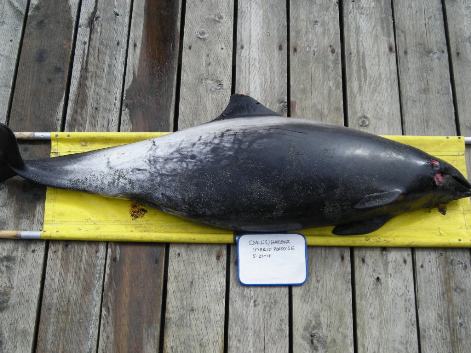 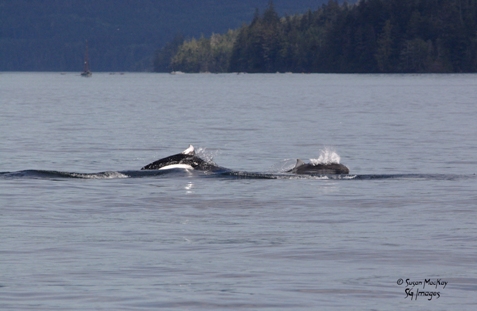 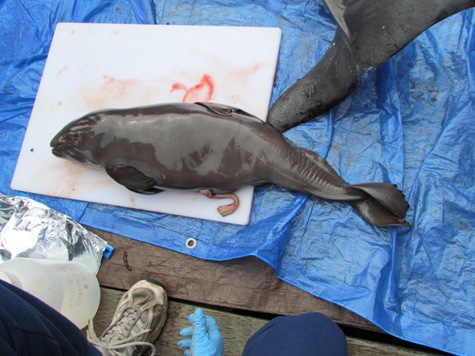 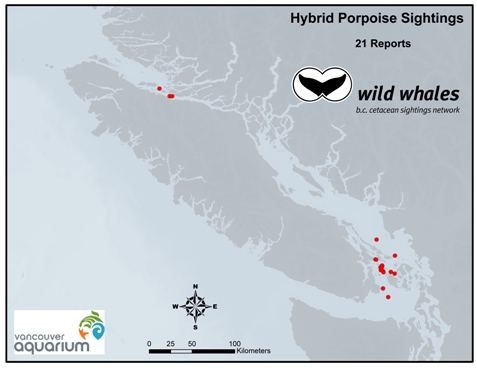