Transients on my mind…

Transients, transients everywhere! It seems like the theme of 2011 at the BC Cetacean Sightings Network  has been transient (mammal eating) killer whales.  Large groups were spotted in the around the Gulf Islands and Victoria throughout the spring.  Consistent sightings  of killer whales that are likely transients have been reported around mid-Vancouver Island and the Sunshine Coast.  In early May a group suprisingly swam right under the Lion’s Gate Bridge and past our office in Stanley Park!  Even more exciting, in Johnstone Strait later that month, a group of nearly 40 transients traveled through the area.  This may be one of the largest groups of transients ever recorded!

Transient killer whales are genetically and acoustically different from resident (fish eating) killer whales. They are stealthy hunters, feeding on other marine mammals.  Harbour seals make up approximately 55% of their diet, with sea lions, dolphins, porpoises and even other whales also on the menu!  They also have a more fluid social organization- with some dispersal from matrilines (mother-based family groups).

Currently, transients are listed as threatened under the Canadian Species at Risk Act and there are approximately 300 animals in the west coast population.  The increase in sightings of transient killer whales is likely more a reflection of the increased usage of certain areas, as opposed to an increase in their population.  Indeed, the increased abundance of harbour seals in the Salish Sea after the cessation of a cull and bounty in the late 60s, has likely made the area more attractive to transient whales once they realized the plentitude of prey available to them in the area.  Since the Salish Sea also has a large human population, there are many keen eyes watching and reporting.

With all these transients piquing my curiosity, it was timely to discover a new paper by Rüdiger Riesch and Volker Deecke regarding the use of whistle communication in transient killer whales.  Killer whales are known to use three types of acoustic signals:  Echolocation (like sonar, giving the animals an acoustic picture of their environment which helps in navigation and foraging), pulse calls (mostly social sounds and can be used to coordinate a group during travel), and whistles.  Previous studies have shown that whistles are used commonly in resident killer whales for close-range communication and coordination of behavioural interactions between animals.  When compared to pulsed calls, whistles appear to be used for ‘private’ communication, instead of being widely broadcast.  They are high pitched, show a high degree of directionality and highly modulated- all in all, they don’t carry far underwater. In transients, however, the use of whistle calls have not previously been investigated.

Researchers do know that transient killer whales are less vocal than their ‘resident’ counterparts, using echolocation sparsely and reserving pulsed calls to times of social interaction or after a successful kill.  This relative silence is understandable as transient prey (other marine mammals) hear very well and demonstrate avoidance behavior when they detect transient calls.   Reisch and Deecke’s study showed that whistles are used sparingly as well.  They were only recorded during times described behaviourally as ‘milling after kill’ and ‘surface active’.

While further research is required, the authors speculate that whistles among transient killer whales are used to facilitate close-range interactions among individual whales, such as prey sharing and manipulation (eg. removing skin/fur from prey) and also in social interactions.  The reduced repertoire of transient whistles may be a result of the fluid social nature of these animals- groups may make short-term, temporary bonds with other members of the population that they seldom encounter. A simplified whistle repertoire would allow the whales to be able to communicate, cooperate and bond more easily.

To learn more about whistles in transients, see the paper here.

Remember, you can help us learn about transient killer whales by reporting your sighting online, via email ([email protected]), or phone (1.866.I.SAW.ONE). 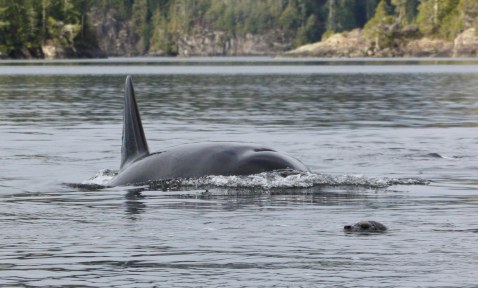 Transient hunt marine mammal prey, including harbour seals which make up over half of their diet. 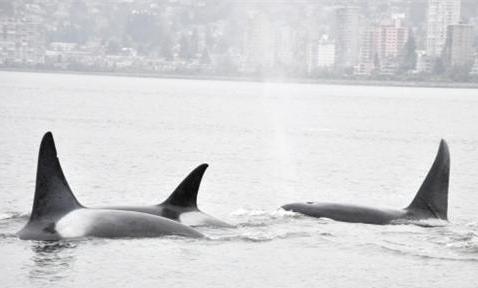