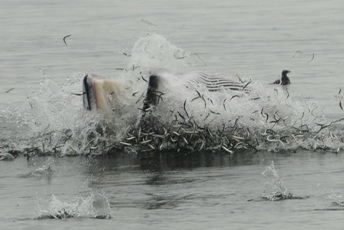 Earlier this month, the Vancouver Aquarium’s cetacean research vessel (the ‘Skana’) and her crew were cruising along northern Vancouver Island  when they spotted what appeared to be a hub of avian activity.  Upon closer investigation, the reason for the aggregation of bald eagles, gulls, and rhinocerous auklets became apparent- a massive group of sandlance were schooling near the surface and the birds were feasting!  It was soon clear that the birds were not alone in enjoying a meal of fish, but minke whales were there as well!

Minkes are rather inconspicuous baleen whales, which can make them a difficult species to study.  They are the smallest baleen species found in our waters (and the second-smallest baleen whale on earth).  Minkes and other rorqual (baleen whales with pleated throats) whales often feed by a mechanism known as “lunge-feeding”, which can seem like a rather awkward maneuver but is effective nonetheless.  The whale will position itself below a school of fish or zooplankton, and “lunge” towards their prey with their mouths wide open to engulf mass quantities of food.  In their effort, they sometimes emerge enthusiastically at the surface with their mouths agape (see photo to the right).  They are able to take in gallons of water (and prey) by means of their expandable, pleated oral cavity and then push all this water out through their baleen plates with their tongues, straining the water out of their mouths and trapping the prey inside.  In fact, minkes have between 240 and 360 baleen plates on each side of their mouths!

Minkes can easily be mistaken for other types of whales here in the northeastern Pacific, but there are several characteristics that can help to identify a minke.  Their dorsal fins are quite pronounced and curved, compared to those of other baleen whales; and they also have a white band around each pectoral flipper.  They are a slender whale, built for speed, unlike humpbacks and greys which have a ‘chunkier’ body shape.  A male minke will measure an average of 6.9 meters and females are slightly larger at 7.4 meters.  Aerial activity is also a rare to see with minke whales, though it can happen.

In the north Pacific minke whales have been largely under-studied due to their elusive nature.  They are hard to research; they are fast, observed swimming at speeds of 30 km/h, and their surfacing can be sporadic and hard to follow.  The ‘blow’ of a minke whale is rarely seen- though smelt easily if upwind of observers, earning this species the nickname ‘stinky minke’.  Little is understood of the movements of north Pacific minke whales.  While animals in the extreme north are thought to be migratory, heading to southern waters in the winter, it may be possible that animals in temperate areas between British Columbia and California may be more ‘resident’.  Regardless if they are migratory or not, minke whales do seem to be quite loyal to summer feeding areas and individuals have appeared in the same site year after year.  Minke whales are individually identifiable by coloration and scarring on their dorsal surfaces and flanks, and hopefully further photo-identification will give more answers about their movements and numbers.   Photo-identification work is currently being done by the Northeast Pacific Minke Whale Project in Washington and the Marine Education and Research Society in British Columbia.  A study done in the Puget Sound area of Washington State has shown that minke whales may have exclusive, adjoining home ranges. This is unknown in other baleen whales.

While minke whales may be shy and elusive, we still want to hear about them!  Please report any minke sightings (and other whales, dolphins and porpoises) here on our online reporting form.  Sightings can also be called in to 1-866-I-SAW-ONE. 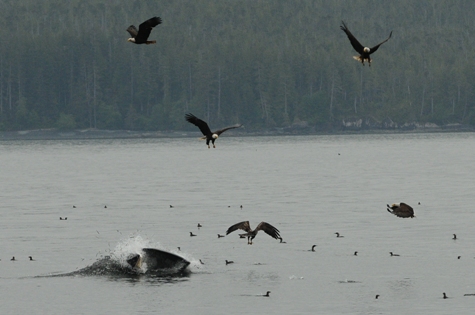 Gull scooping up a mouthfull of sandlance. 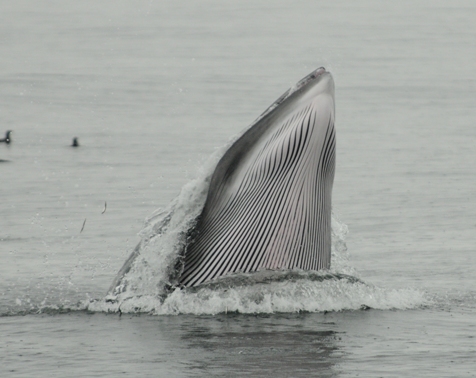 The characteristic pleats on the minke whales' throat which expand to take in large amounts of seawater while feeding.