Humpback in Danger from Entanglement 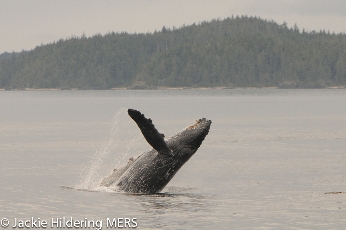 Have you seen this whale?? A young humpback whale entangled in a line that is likely attached to a crab or prawn trap was spotted multiple times over the past three weeks in the Strait of Georgia.  The whale was first noted in Active Pass on July 31st by local whale watchers and has been sporadically sighted since then.   The latest sighting was on August 11th in the Strait of Georgia halfway between Porlier Pass and Point Grey.   No sightings have been reported since last week and we are asking the public throughout the Strait of Georgia to be on alert for this animal.  The whale is towing a bullet buoy that appears on some surfacings and may make the animal easy to identify.

Interestingly, this humpback whale is known to researchers in BC.  Christie McMillan, of the Marine Education and Research Society (MERS) was able to identify the individual as ‘Canuck’, who was first spotted in the Johnstone Strait area in late May and early June by researchers with MERS and OrcaLab.  The whale was so named as it has a c-shaped and puck-shaped marking on its tail and was first sighted when the Vancouver Canuck hockey team won the Western Conference final against the San Jose Sharks. Photos from these early sightings by Jackie Hildering, also of MERS, show the animal was not entangled at that time and appeared healthy and energetic.

Unfortunately, Canuck’s entanglement appears to have taken a toll on the animal’s health.  The latest sighting from last Thursday shows that Canuck has developed a concerning skin condition.  Canuck is also more heavily infested with whale lice than would normally be seen on a humpback whale; an increased infestation of lice can indicate poor health or restricted/slow movement.

While consulting Scott Landry, a leading expert in the field of disentanglement at the Center for Coastal Studies in Provincetown, Massachusetts, he expressed concern for the situation and the health of the animal. “The pits, filled with lice, are very consistent with a whale that is going downhill. While this whale may be free-swimming, it is not likely to have the range of motion needed for actual feeding. Unless the entanglement gives way or is removed, there is likely to be a negative feedback loop” noted Landry.

Landry also emphasized that entangled whales, especially in busy water ways like the southern Strait of Georgia, may be a public safety concern.  Well-meaning members of the public who come across this animal may try to ‘help’ by attempting to remove the gear on the animal themselves.  This is very dangerous, and has even proved lethal in other parts of the world.  Entangled animals, like any wild animal, may be unpredictable and erratic in their movements and behaviour.  Extensive, proper training is required to be able to safely and successfully disentangle a whale.

Beyond being a human safety concern, an improper disentanglement attempt by an untrained person may result in removing only a portion of the gear (usually only that which visible at the surface).  By removing surface gear only, the animal still remains entangled, but is hard to re-sight.  Anyone who encounters an entangled whale should report it right away, but should not attempt any action on their own.  Entanglements should be reported ASAP to the Marine Mammal Response Network at 1 800 465-4336 or on Channel 16 on the VHF radio.

Whale watchers in the area have been vigilantly monitoring Canuck but have not spotted it since the weekend.  They are expressing concern over the declining state of the animal and hope to see action soon.  The BC Cetacean Sightings Network, along with colleagues at the Cetus Research and Conservation Society, were able to assess the whale on Thursday August 11 while doing a marine mammal survey of the Strait of Georgia.  Unfortunately, at that time, just an assessment of Canuck was performed as disentanglement of marine species is authorized by Fisheries and Oceans Canada.  To support them, several researchers trained in disentanglement techniques are on standby to offer expertise and help when the disentanglement is attempted.  Again, if you see this whale, or any other marine mammal that is entangled or in danger, please call DFO’s hotline immediately at 1-800-465-4336.

Entanglement is listed as an anthropogenic threat to humpback whales in the species’ Status Report and Draft Recovery Strategy.  Humpback whales are listed as Threatened under the Species at Risk Act. 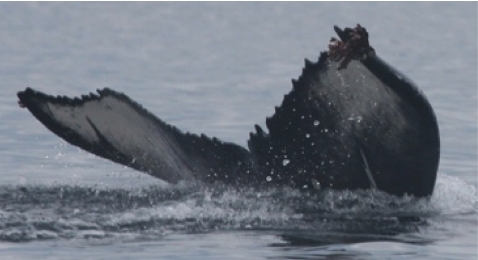 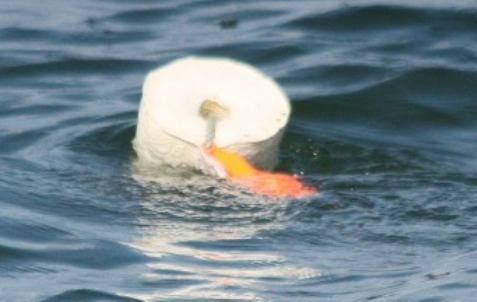 The bullet buoy, likely from a crab or prawn trap, trailing behind Canuck. 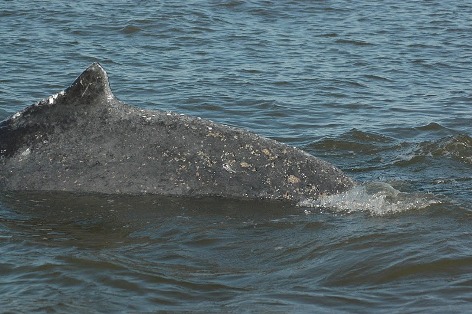 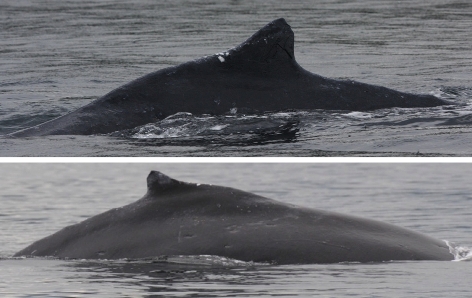