British Columbia’s southern resident killer whale population is one of the most intensely studied orca communities in the world, however, we know very little about their mating system.  Using similar genetic techniques employed by Dr. Lance Barrett-Lennard in a pioneering study of northern resident killer whales in the late 90s and early 2000s, Washington scientist Dr Micheal Ford and colleagues recently published a paper in the Journal of Heredity examining the mating system of the endangered population.  The study used DNA samples that were obtained from blubber biopsies, feces, mucous, and samples from dead stranded whales.  This genetic data from 78 individual whales including 15 mother/calf pairs and 8 potential fathers was used to determine parental and sibling relationships within the southern resident community.

The mating system of any given species is important to understand as it directly affects both evolutionary processes and long term viability of the population.  Scientists already know that killer whales have an unusual social structure whereby males and females operate in matrilineal family groups and offspring of both sexed rarely disperse from their natal group- called a matriline.  Closely related matrilines that are often found together are known as pods.  Pods that share a common range and associate at least occasionally are referred to as communities or, in more scientific terms, populations.

For this particular study, the use of genetic methods and statistical software was an incredibly useful tool because direct observation of mating patterns and parentage is rarely observed in the wild.  Scientists were then able to unfold some of the mating patterns of the southern residents, with surprising results and evidence of intra-pod mating!  J1 of J pod was shown to be the likely father of 8 calves, 5 with other J pod females, 2 from K pod, and 1 unidentified.  L41 was also revealed to be the inferred father of 3 J pod calves and 1 K pod calf.

Despite the evidence of mating within pods, killer whales do seem to avoid inbreeding at another level.  None of the offspring sampled in this study were the result of matings between members of the same matriline, and there was no evidence of father-daughter matings.  This suggests that males may be able to recognize their offspring.  Furthermore, it has been hypothesized that killer whales mate primarily with individuals from a different social group during multigroup aggregations.

As with Lance Barrett-Lennard’s earlier study, Ford and colleagues showed that females prefer to mate with older, larger males.  J1 (born around 1950) was the oldest male at the time of conception of each of the offspring analyzed for this study, and L41 (born in 1977) was the second oldest.  These two males are also estimated to be the first and third largest whales in the population respectively.  While J1 has been missing since November 2010 (and presumed dead), he has contributed heavily to the gene pool!

So why does male reproductive success seem to increase with his age?  Female choice could have a lot to do with it.  Killer whales are sexually dimorphic, meaning adult males are much larger than adult females, and have enlarged appendages (dorsal fin, flippers, and flukes).  So it is likely that sexual dimorphism is a sexually selected trait and females are attracted to males with large appendages.  On the other hand, it is unlikely that competitive male dominance is playing a role.  Male-male aggression has rarely been observed and few males have scarring which would indicate that they are routinely fighting each other for the chance to breed.  There are also frequent periods when large males forage alone, leaving females with ample opportunity to mate with younger, smaller males if they were inclined to do so.

The southern residents are an endangered population in Canada.  Please help to protect them by following the Be Whale Wise Guidelines when observing them in the wild and reporting your sightings to the BC Cetacean Sightings Network.  If you are  interested in reading the entire paper, find it here. 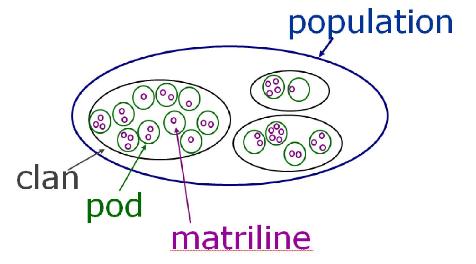 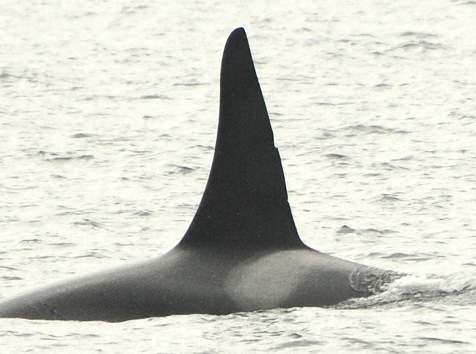 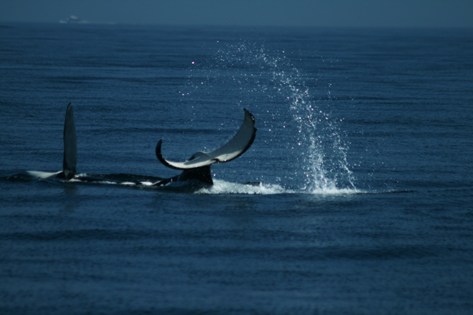 J1 (Ruffles) backswimming and showing his flukes and pectoral flipper. The appendages of male killer whales are typically larger than those of females. 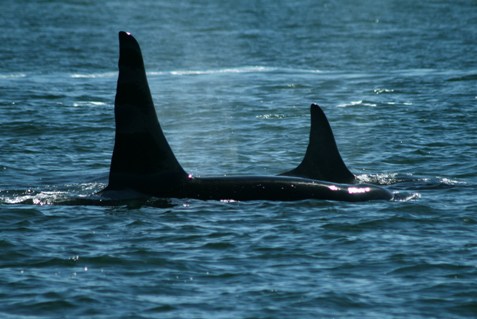