A Lesser Known Dolphin Found In BC Waters 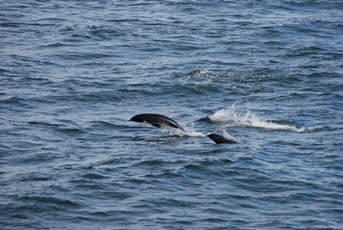 Northern right whale dolphins are roughly 3m long, with males being larger than females.  They can be found in cool, temperate waters and sub Arctic regions from the Gulf of Alaska to Southern California.  Like the Pacific white-sided dolphin, the northern right whale dolphin is a highly gregarious species- and can be seen travelling in pods numbering 2000-3000 animals!  They are also extremely fast swimmers, reaching speeds of 40km/hr.  Observing aerial behavior like breaching and belly flops is common.  Similar to other toothed cetaceans, northern right whale dolphins rely on echolocation to navigate dark seas and locate prey.  Hydrophone recordings of these animals reveal pulsed vocalizations and clicks with high repetition.

Mating behavior is rarely observed in northern right whale dolphins; what scientists do know is that females reach sexual maturity slightly earlier than males, but both sexes are ready to mate around at 10 years of age.  Calves are seen in winter and early spring and born a grayish-brown color before developing the black and white adult coloration after 1 year.

Northern right whale dolphins have also been known to interact with other species; it is not uncommon for them to be spotted with Pacific white-sided dolphins, pilot whales, and Risso’s dolphin as they all occupy similar habitat which is typically deep water off the continental shelf or where deep waters approach the coast.  These areas tend to be highly productive in terms of food supply, and it is here where the dolphins can forage for their prey of choice- squid, and also hake, saury, and lanternfish.  The dolphins themselves have few predators, but killer whales and large sharks have been known to prey on them.  Unfortunately for northern right whale dolphins, accidental catch in the fisheries operations is their number one threat.  In fact, in the mid-1980’s, incidental takes of northern right whale dolphins by the squid driftnet fishery operated by Japan, Korea and Taiwan numbered 15,000-24,000 dolphins per year.  The good news is that in 1993, the UN issued a moratorium on large-scale high-seas driftnets.  This has reduced the danger to offshore cetaceans, however, the continued use of driftnets to catch billfish, sharks, squid, and tuna inside the exclusive economic zones of North Pacific countries, and some continued illegal fishing on the high-seas, may result in the killing of unknown numbers of northern right whale dolphins each year. 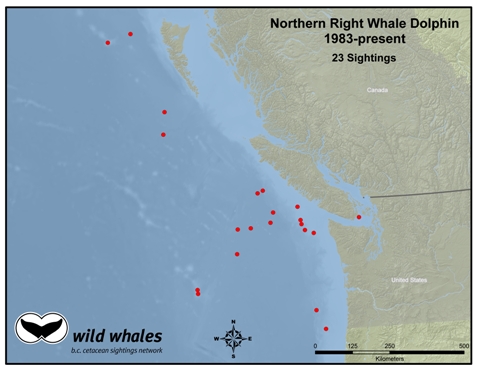 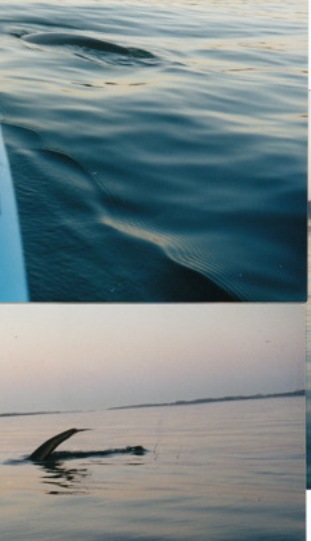 A sketch showing the physical characteristics of a northern right whale dolphin. Note the absence of a dorsal fin, and the white patches on the underside of the body. 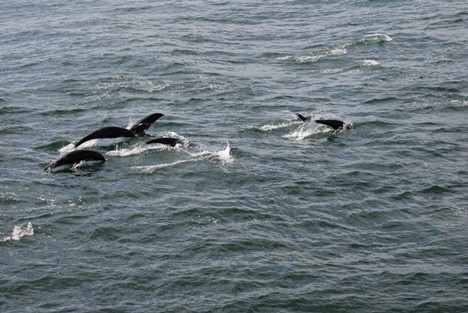