Last year we were enthralled by the story of ‘Flex’, a 13-year old grey whale tagged off Sakhalin Island in Russia.  Flex is part of the critically endangered Western grey whale population which consists of a mere 136 individuals.  It was previously believed that after feeding in Russian waters throughout the summer, this population traveled to an undiscovered breeding ground in Asia.  Flex made news when, instead of heading south along the coast of Asia as anticipated, he headed across the Bering Sea, through the Gulf of Alaska to North America.  He traveled all the way down to Oregon before his tag stopped transmitting last February.

Upon closer investigation, researchers from A.N. Severtsov Institute of Ecology and Evolution of the Russian Academy of Sciences (IEE RAS), Oregon State University Marine Mammal Institute, and NMFS were able to determine that Flex was photographed off Vancouver Island in 2008.  They also discovered 4 individuals from the Western (Sakhalin Island) population in the famous San Ignacio lagoon in Baja this past winter.  These discoveries have researchers reconsidering widely-accepted ideas of two geographically separate populations.  Still, distinct DNA and nuclear genetics do support the idea that the two populations are different.  A previous sighting of an individual from this population along the coast of Japan may indicate that some individuals do stay in the Western Pacific.

With more questions than answers, the research team returned to Sakhalin Island this year to tag more whales. Six whales were tagged in the fall but only two tags continued to transmit as those animals crossed the Pacific in the direction of North America.  Unfortunately, the tag on one of the animals (nicknamed ‘Agent’) stopped transmitting in the Gulf of Alaska.  Luckily, one animal continues to transmit its location and it has been tracked even further than Flex!

The whale in question is a young 8-year old female named ‘Varvara’.  After she crossed the Gulf of Alaska, she headed in towards the BC coast, coming close to shore around Haida Gwaii, crossing Hecate Strait and then made her way down Vancouver Island.  On Jan 13thand 14th, researchers from Oregon State were able to locate Varvara off southern Oregon and northern California.  With luck, Varvara’s tag will continue to transmit for weeks to come, shedding more light into this unexpected migration.

Help us learn about grey whale occurrence off the coast of BC by reporting your sightings here.

Note: This research was conducted by A.N. Severtsov Institute of Ecology and Evolution of the Russian Academy of Sciences (IEE RAS) and Oregon State University Marine Mammal Institute in collaboration with the U.S. National Marine Fisheries Service, Kronotsky State Nature Biosphere Reserve and the Kamchatka Branch of the Pacific Institute of Geography. The research was contracted through the International Whaling Commission (IWC) and International Union for Conservation of Nature (IUCN) with funding from Exxon Neftegas Ltd. and Sakhalin Energy Investment Company Ltd 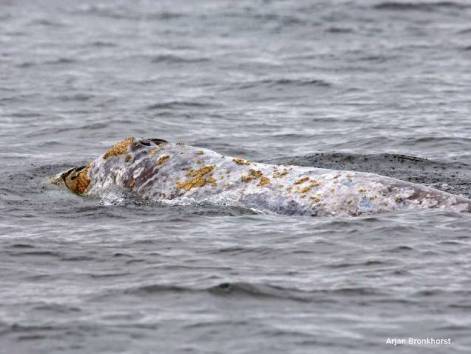 A grey whale can be identified by barnacles and white mottling on its skin.