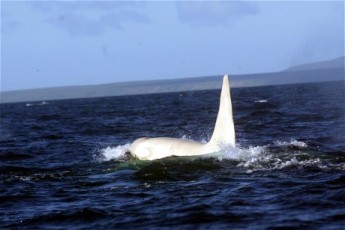 On April 23 2012, researchers with the Far East Russia Project revealed that they had successfully filmed “Iceberg” the all-white, mature male killer whale in 2010 off the east coast of the Kamchatka Peninsula. According to researchers, Iceberg is believed to be at least 16 years old and was seen travelling with a group of 12 other whales. He appears to be healthy and socially adjusted within his pod. Scientists are unsure of the cause of Iceberg’s unusual pigmentation, but if he can be located again in the summer of 2012 they may be able to find out. A good look at his eye color would reveal if he is in fact a true albino (albinism produces pink eyes) or whether his unusual pigmentation is due to other genetic causes.

While this is indeed exciting news, it is by no means the first time a white killer whale has been spotted in the wild. Unfortunately most do not survive very long due to a genetic defect that causes the white coloration in the first place. In March of 1970, a female white killer was captured along with five other whales in Pedder Bay at the south end of Vancouver Island. “Chimo” was moved to Sealand, an Aquarium in Oak Bay, where she lived a little over two years before she died of pneumonia in October 1972. Chimo suffered from Chediak-Higashi syndrome, a recessively-inherited trait causing recurring infection and fevers that also affects mice, mink, Hereford cattle, humans and killer whales. It was later discovered that Chimo belonged to the T2 group of transient killer whales, and in fact, years before her capture another white orca dubbed “Alice” was spotted in what is suspected to be the same pod. Alice was never captured and vanished in the 1960s.

In March of 2008, an all-white resident-type male killer whale was spotted off western Alaska’s Aleutian Islands. This whale is not a true albino because it had signs of darker pigmentation on his body, but similar to Iceberg, he whale appeared to be healthy and mature.

In December of 2009, a grey-white transient calf was spotted near the Victoria, BC waterfront along with its mother T68C.

Killer whales may be the only known cetacean species to suffer from Chediak-Higashi syndrome, however other whale species have been observed in the wild with striking white coloration.

– A white humpback whale “Migaloo” has been spotted many times over the years along Australia’s Queensland coast as recently as October 2011. Migaloo is an adult male and suspected to be an albino, but without definitive evidence for the moment he is known as a “hypo-pigmented” humpback.

– A white harbour porpoise “Casper” has been spotted along the Maine coastline. Despite his/her lack of camouflage, it seems to have survived predation and was spotted in September 2011. Casper is not a true albino.

– In May 2011 a white harbour porpoise was spotted in San Francisco Bay area.

Your sightings are important! Whether you spot the next “Iceberg” or more likely a normal-colored cetacean, the BC Cetacean Sightings Network would like to hear about it! Give us a call at 1-866-I-SAW-ONE, send us an email at [email protected], or fill out our online sightings form here. 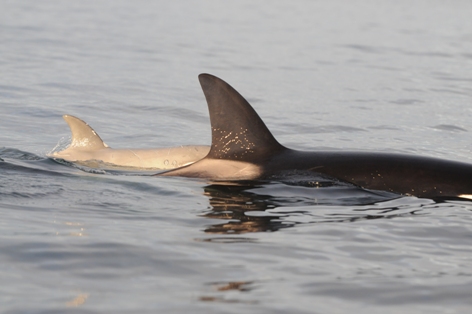 A grey-white transient killer whale calf swims beside mother T6C near Victoria BC in December 2009. 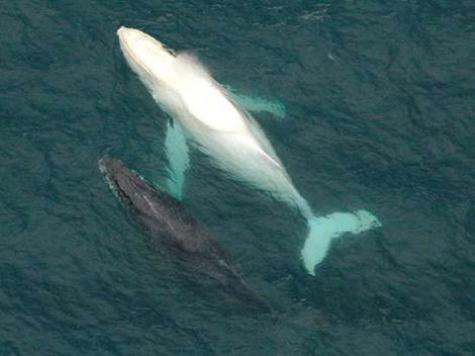 Migaloo the white humpback whale as seen along the Australian coastline in 2005. 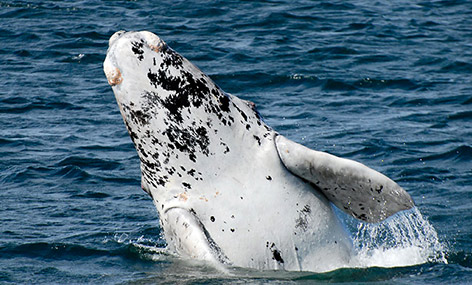 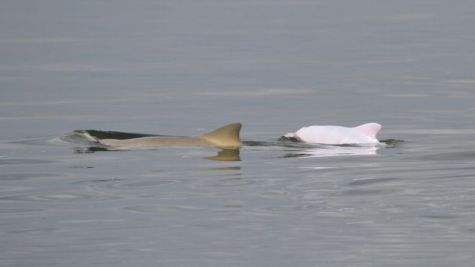