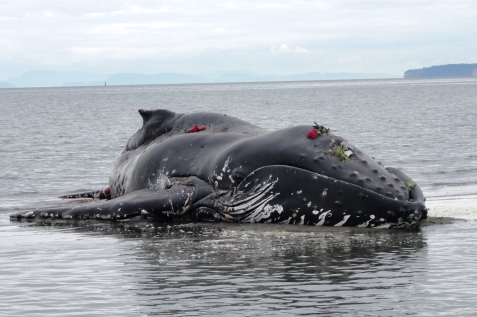 The sad scene on Tuesday morning in White Rock was a powerful reminder of human impact on the world’s oceans and its inhabitants.  A young humpback whale measuring 8.6 meters was discovered early in the morning on the public beach.  The whale was not only stranded, but grossly emaciated and entangled in heavy plastic line.

Vancouver Aquarium veterinarian Dr. Martin Haulena attended the scene early to examine the beached whale. Upon arrival, Dr. Haulena did not notice any signs of life, leading him to believe that the whale had been dead for several hours. Later in the morning, Senior Marine Mammal Scientist Dr. Lance Barrett-Lennard and the Sightings Network crew attended the scene to do an external examination and collect measurements and samples.  In the evening, Dr. Stephen Raverty of the Provincial Animal Health Lab conducted a necropsy.

While a humpback whale had been reported in the Strait of Georgia to the Sightings Network the previous weekend, it does not appear that the stranded animal was the same individual.  Individual humpback whales can be identified by the unique pattern on the underside of their tail flukes; however the stranded animal was beached on its ventral (stomach) side so a view of this area was not possible.  Pictures of the underside of the tail fluke may be possible once the animal is off the beach and may lead to the identification of this whale.

The whale was entangled through its mouth and around the pectoral fins.  Scaring on the flanks and tail peduncle also showed evidence of entanglement abrasion.  As with many entanglements, it is suspected that the gear inhibited proper feeding and the whale slowly starved.  Whereas healthy whales appear rotund and ‘filled in’, this whale exhibited the tell-tale sunken in sides and protruding backbone of an emaciated whale.  The poor body condition of the whale likely means that it was entangled for a protracted period of time, possibly upwards of several months.

The gear entangling the whale was a heavy monofilament line.  The gear’s origin is unknown and at present does not appear to be fishing gear used in BC.  As humpbacks are migratory animals, it is possible that this young whale picked up the gear in a southern wintering area or on its northward migration.

Regardless of where this whale became entangled, it is a powerful reminder of the amount of debris and discarded gear in our oceans, including the waters off British Columbia.  A recent Vancouver Aquarium trip to Haida Gwaii discovered an immense amount of plastic and Styrofoam littering the shorelines.  From entangling large marine species, to being accidentally consumed by smaller animals, to smothering benthic creatures, debris is a major threat to all levels of marine life.  To further compound the problem, the devastating tsunami that hit Japan last year has increased the amount of debris reaching our shores.  Citizens can help reduce this problem by joining the Great Canadian Shoreline Clean-up’s Tsunami Debris Cleanup this summer or the annual cleanup this September.

As summer begins, BC will see an increased number of humpback whales using BC waters to feed.  Help scientists learn more about when and where these animals spend time by reporting your sightings to the BC Cetacean Sightings Network online here or via phone at 1 866 I SAW ONE.  If you see any dead, injured, entangled or distressed marine mammal, report it to Fisheries and Oceans Canada at 1 800 465 4332. 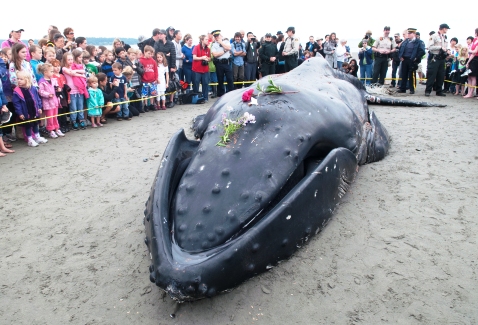 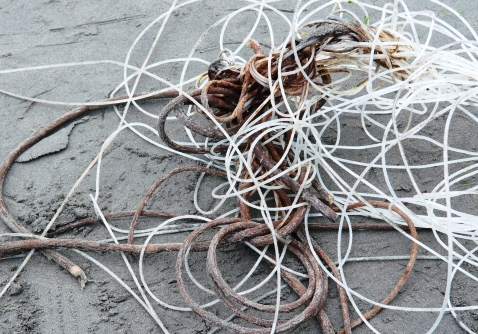 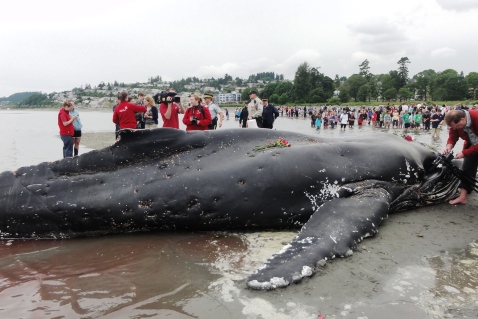