Ten years ago, Springer (A73), an orphaned Northern Resident killer whale, brought together scientists, government officials, advocacy groups, and concerned citizens in a dramatic and moving rescue effort.  She was rescued near Seattle on June 12, 2002, and was rehabilitated in a holding pen in Manchester, Washington. One month later, on July 13, Springer was transported from Washington to a holding pen in Johnstone Strait. On July 14 she was returned to the wild to reunite with closely related whales as they swam by the release site.

To celebrate the anniversary of this moving success story, events were held in Vancouver and Seattle in June. Next, a three day celebration will occur in Telegraph Cove, the closest community to where Springer was released 10 years ago. To learn more about the events, see here.

Springer is still being celebrated today not only because that the effort was the first time a wild killer whale was rescued, rehabilitated and released, but also the demonstration of immense passion and international cooperation surrounding her ordeal.  Here is a time line outlining the Springer story from the Wild Killer Whale Adoption Program:

June 2000– Springer was first sighted and given the A73 designation by researchers John Ford and Graeme Ellis of Fisheries and Oceans Canada.

Summer 2001– The A24 matriline that Springer belongs to was seen multiple times with all members present except for Springer and Sutlej. It was thought that they had probably died

August 2001– G50, a ten year old member of G1 pod, is seen swimming with a young calf. G50 is assumed to be the mother and the calf is named G53. On careful examination of photos months later, Graeme Ellis realized that G53 was actually Springer!

Sept. – Oct. 2001– G1 pod is seen feeding west of the Strait of Juan de Fuca, near the Washington/BC border. It is not known whether Springer was still with them

January 2002– A calf, eventually recognized as Springer, was sighted off Vashon Island, close to the Seattle waterfront.

March-May 2002– Expert panel debates best course of action, Springer’s condition slowly deteriorates, Canadian and US governments negotiate, and the decision is finally made to capture, rehabilitate, move and release Springer.  The Orphan Orca Rescue Fund bring many NGOs together to advocate and fundraise for Springer’s rescue.

June 13, 2002– Springer’s capture is covered by TV and news outlets worldwide. She is placed in a net pen near Seattle for rehabilitation

July 13, 2002– Springer’s health has improved dramatically. She is transported by boat to Dong Chong Bay, near Johnstone Strait, and placed in a net pen.

July 14-18, 2002– Springer is released as members of her matriline pass by Dong Chong Bay. She is not accepted initially and spends the next few days on her own, sometimes following a mile or so behind her pod.

July 18, 2002– Springer is temporarily adopted by Nodales (A51), a 17 yr old female from the A5 pod who does not yet have a calf of her own. She is sighted regularly over the next few years, sometimes with close relatives in A11 matriline, sometimes with Nodales, and sometimes with both. Apart from moving between groups, she appears to be well socialized.

2002-2012– Springer continues to be sighted on a regular basis with the A11’s. She appears to be in excellent health and her rehabilitation a complete success.

Killer whales, including Springer are monitored by the collaborative effort to census wild killer whales in BC.  Help monitor these whales by reporting your killer whale sightings in BC to the BC Cetacean Sightings Network online or toll free at 1 866 I SAW ONE. 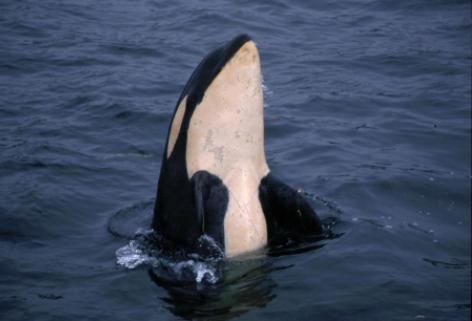