From the field: Central Coast Survey

From July 16th to July 26th the BC Cetacean Sightings Network embarked on a survey of the central coast aboard the Vancouver Aquarium’s research vessel ‘Skana’.  Travelling from Telegraph Cove to Milbanke Sound and back, we encountered 6 species (harbour porpoise, Dall’s porpoise, humpback whale, Pacific white-sided dolphin, minke whales and resident killer whale) for a total of 41 encounters.  Here are the top 5 highlights from our trip:

1) At the confluence of Slingsby and Seymour Channel is the famous Nakwakto Rapids. After abandoning our plan to round Cape Caution on our first day due to poor weather, we decided to check them out. Nakwakto hosts some of the fastest flow (14.5 knots at max ebb tide) in the world and navigating the rapids is only possible at slack tide. Not exactly a place we expected to find cetaceans.  However, we arrived there just before slack and were able to sneak through.  On the other side, we were surprised to find a small group of approximately 15 Pacific white-sided dolphins. They were unusually elusive but we were able to take a few ID photos before leaving them to continue on.  The sighting caused us to ponder whether or not the dolphins cross the rapids regularly? If so, do they wait for slack tide like boats do?

2) Summer time is humpback time on the Central Coast.  While this year did seem a bit quieter in terms of humpbacks compared to a few years ago, the same abundance of bait fish was also lacking, probably explaining the lower numbers.  That being said, we did still spot 27 individual humpbacks over the course of our travels. One humpback encounter was particularly curious. We came across an animal that seemed immobile at the surface. When we approached a bit closer, the animal didn’t move. Instead it lay almost motionless, breathing slowly and never submerging more than a few feet and always in the same area. As this is unusual behaviour for humpback whales, we were concerned that the animal was possibly injured or entangled. Entanglement in fishing gear can restrict humpback whale movement considerably, sometimes to the point that the animals are unable to move, feed or ultimately survive. With our engines off so as to not disturb the whale, we sat nearby observing to see if we could detect any cause for concern. It continued to lie at the surface, breathing normally. Eventually the animal submerged and fluked, showing us almost its entire body. We could see no evidence of injury or entanglement. It was in good body condition (not thin) but we followed it at a distance for a short time to ensure it was ok. By the time we left it, we were pretty sure that we had simply come across a napping humpback whale.

3) Early one afternoon we heard some distant calls on the hydrophone– killer whales! In total, we had three encounters with killer whales and heard them (but couldn’t find them due to weather) two more times.  On this occasion, we carefully searched the area and  located the whales in northern Queens Sound. It was the G17s and the I11s- northern resident matrilines. When we first encountered them they were spread out, but shortly afterwards they grouped up and went into resting mode. Swimming pectoral fin to pectoral fin, the rhythmic sound of their breaths carried across the calm waters of the Sound. As the whales cruised slowly, we became aware that we were not the only creatures watching them. Nearby, several small sea otter rafts were taking notice of the black dorsal fins moving past. In fact, one lone sea otter had the whales pass by very closely but neither the whales nor the otter seemed too interested in the other.

4) Travelling in the Central Coast gave us the opportunity to connect with BCCSN observers in the area, including a visit to Dryad Point Lightstation, just outside Bella Bella. Lightkeepers Dan and Deb had kindly offered to pass on photos and video they had taken of a group of killer whales that had passed slowly by their light a week and a half earlier. We immediately recognized members of the D11 group of northern residents from the images…one of the groups we had seen ourselves a few days ago. Like many BC lightkeepers, Dan and Deb record their whale sightings and send them to the BC Cetacean Sightings Network. It was nice to finally put a face to the name that has accompanied many whale sightings received over the years.

5) After 9 days on the water, often working in rough seas, we finished off our trip with a much-needed energy-filled encounter.  On our way south, heading towards Hope Island, we detected the excited calls of Pacific-white-sided dolphins over the hydrophone.  We found them quickly to the west. The dolphins were porpoising along the surface at great speed, heading, no doubt, for a patch of prey that they had just detected. An unusual movement caught our eyes, and we realized that a single Steller sea lion was in the middle of the group, which numbered about a hundred. The sea lion was porpoising too….but evidently having a hard time keeping up, as it slowly fell to the back of the group and was finally left behind.

As always, you can help us further understand cetacean occurrence and distribution thoughout the coast by reporting your sightings to the Network!  Report online here or by calling 1 866 I SAW ONE or emailing [email protected] vanaqua.org 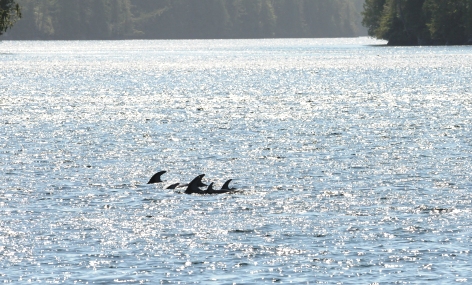 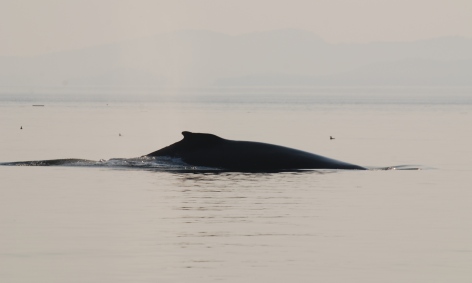 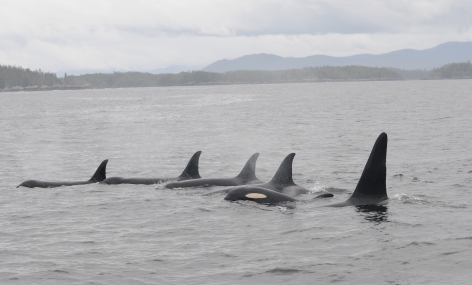 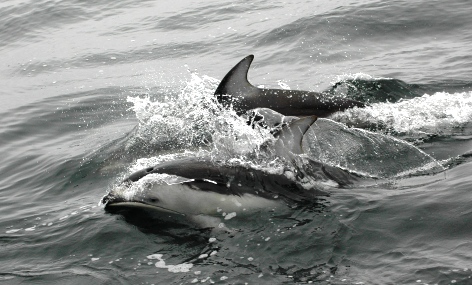