As mentioned in previous posts, sea turtles aren’t necessarily an unusual occurrence along the B.C. coast.  Leatherback sea turtles regularly appear in these waters in the later summer to feed on jellies.  However, the turtles that stranded last year were not leatherbacks, but an olive ridley and three green sea turtles.  Both these species have a more tropical distribution and wayward individuals are generally considered ‘lost’ when seen in more northerly climes.  The BCCSN database does contain 34 sightings of green sea turtles, but the olive ridley was the first seen in B.C.

Cold stunning typically occurs when hard-shelled sea turtles are swimming or foraging in warm waters and are caught suddenly by a rapid decline in sea temperature.  In B.C., waters were sufficiently warm for sea turtles into the early fall of 2011.  When water temperature dropped quickly, and the turtles were exposed to cold temperatures, their bodies started to shut down.

At the time of the strandings, there was speculation about where these animals may have originated.  With the Japanese tsunami of March 2011 and its associated ocean debris still looming large in the collective conscience, there was even some brief speculation that perhaps these turtles may have come from the other side of the Pacific.  Despite this dramatic theory, it was much more likely that the turtles had come from further south on this side of the ocean. Earlier this fall, this was confirmed.  In September, Fisheries and Oceans Canada shared the results of the genetic tests conducted on these four specimens.  The DNA extracted and sequenced by Allyson Miscampbell of UBC /Vancouver Aquarium was sent to the Southwest Fisheries Science Centre in California for comparison with their sea turtle genetics databank.  The results revealed that all the dead and stranded green turtles were from the Eastern Pacific stock originating from Mexican, Central American or Galapagos nesting beaches.  The olive ridley was from the Eastern Pacific stock with nesting origins in Mexico-Costa Rica.

The sea turtle genetics program at the SWFSC is currently developing new markers for all the nesting populations of sea turtles in the Eastern North Pacific.  This may one day allow researchers to better narrow down turtle origin to specific nesting beaches.  For now we know that these four wayward turtles came from the Americas.  These samples also provide valuable information on two species listed as Threatened by the International Union for Conservation of Nature (IUCN).

How to help sea turtles in BC waters

How often cold stunning events occur and the climatic links that cause them are still not fully understood.  You can help by reporting any sighting of sea turtles (even old reports!) to the BC Cetacean Sightings Network.  Contact us at 1-866-I SAW ONE.  If the animal appears to be sick, injured, dead or under distress, please report it immediately to the Marine Mammal Response Network at 1-800-465-4336. 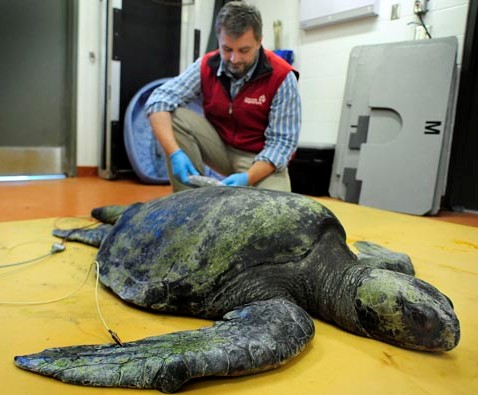 The stranded turtles, including the green turtle pictured here, were transferred to the Vancouver Aquarium for care. Unfortunately, the animals were too far gone and did not survive.