What’s in a name?

So why the change in moniker?  The push to change the common name is in deference to late Michael Bigg, who first described different types of killer whales in the eastern North Pacific.  Bigg was a biologist at the Pacific Biological Station (DFO) in Nanaimo for twenty years before he passed away in 1990.  His pioneering work on killer whales was the groundwork on which all modern studies have been built.   Learn more about Mike’s work here.

The terms “resident” and “transient” were coined in the early 1970s by Bigg and colleagues engaged in the first killer whale studies on the coast.  Their initial field seasons were spent in Johnstone Strait, an area frequented by resident killer whales in the summer.  Here they became accustomed to viewing larger  groups of whales (10-25 animals) that would predictably and consistently use the area in the summer.   These whales were termed “residents” because of this behaviour.  Occasionally in those early days, the researchers would encounter smaller groups of whales that used the area differently and would appear sporadically and for short periods.  It was hypothesized that these whales may be outcasts that were simply transiting the area, hence the term “transients”.  Today, we now know that  neither are “outcasts” from the other group, but Bigg was correct in his belief that these were very different types of whales.  The behavioural differences observed early on were only the tip of the iceberg: residents and Bigg’s (transients) have very different  genetics, acoustics,  and prey preferences.  Both types travel great distances during the year and may use the same habitat, however differently.  In light of this new knowledge, the old terms no longer accurately describe these different groups of killer whales.

This new common name is now being used far and wide, honoring Michael Bigg and his crucial work, but, at this point, it doesn’t have any effect on their taxonomic designation.  While killer whales around the world are still labeled as one species, Orcinus orca, this too may change soon.  A genetic study conducted by Phil Morin of the Southwest Fisheries Science Centre and colleagues showed that Bigg’s killer whales are distinct.  In fact, the study showed that the genetics of Bigg’s are the most distinct of all killer whale types and that they may have diverged from other killer whale types nearly 700,000 years ago.

Until further research is conducted to formally establish Bigg’s as a separate species, the common name change will have to suffice to distinguish these whales as unique. Join us in changing your killer whale terminology and honour the North Pacific’s killer whale pioneer. To learn more about the Bigg’s killer whales on our coast, see http://killerwhale.vanaqua.org/kwap/whale-facts and check out the new data report and identification catalogue produced by Fisheries and Oceans earlier this year here.

The T123s, a family of Bigg's killer whales. 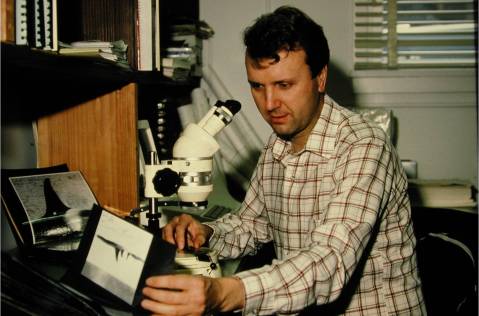