While the rest of Canada is still under a deep freeze, we here on the west coast are finally seeing our first hint of spring.  While the sky is where you’ll find the feathered migratory masses this season, should you be near the coast, don’t forget to turn your eyes to the waves.  Another type of migration is about to arrive- but instead of wings, these travelers have flukes.  Wandering whales are on their way north.

Two of the most commonly spotted migratory whales in B.C. are the humpback and the grey whale.  Both species, like most migratory cetaceans, spend their winters in equatorial areas and then summer in temperate or polar waters.  When migratory whales arrive in colder waters, they get straight down to business: eating. Like birds, whales travel in search of food.  While the azure waters of the tropics may look enticing, they do not contain nearly enough food to sustain large whales.  Instead, it is the cold, nutrient rich waters of the North Pacific that contain adequate sustenance needed for these whales to survive.  Diets of migratory baleen whales include krill, amphipods, and small schooling fish like herring, pilchards, and sandlance.  Because the whales are feeding very little or not at all while in warmer waters, it is paramount that they consume as much as possible when they can.   In fact, according to NOAA (the American equivalent of DFO) a large adult humpback whale may gorge on up to 1,000 kg a day during the peak of summer feeding season!

While we welcome the greys and humpbacks back to B.C. each year, the question remains: why do they migrate?  Many other cetaceans are able to breed, give birth and have successful offspring in colder climates, so it’s unlikely that the long distance movements have much to do with ideal water temperature.  Furthermore, as established earlier, there is little to eat on those breeding grounds.  Perhaps the answer lies not in something they are seeking by travelling south, but in something they are escaping.

While healthy adult humpback and grey whales likely have few natural predators, their calves are vulnerable to predation by Bigg’s (transient) killer whales.  Many whales bare tooth rake scars from killer whales on their flukes and flippers – evidence of narrow escapes.  It is possible that grey, humpback and other large whale species that migrate do so to give their young a head start in getting bigger, stronger and better able to avoid, evade or escape hungry Bigg’s killer whales once they head north.

Want to watch the migration?  Pacific Rim National Park is a great place to look for migrating grey whales in March- you can often seen them from headlands on shore!  Whalefest is held in the area each March as a celebration of the grey whale migration. Can’t make it to the West Coast?  Boundary Bay, just outside of Vancouver is an area that greys sometimes stop for a quick pit-stop.

Humpback whales can be found in many areas of the coast in the summer months.  By taking a whale watching trip from any of the major eco-tourism centres, you may find yourself face to face with one of these wandering whales.   Density of humpbacks tends to increase the further north on the coast you are.

Remember, if you see a wandering whale- report it!  Sightings of any whale, dolphin or porpoise should be reported to the BC Cetacean Sightings Network at www.wildwhales.org or 1 866 I SAW ONE (472 9663). 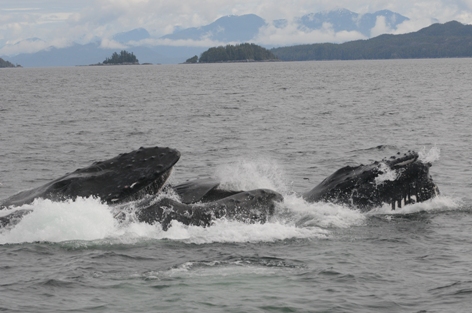 Migratory whales are focused on feeding when they arrive back to the cold waters of the North Pacific.

Many whales bear the scars of escaped Bigg's (transient) killer whale attacks- the white parallel scars on this whale's flukes are likely from killer whale teeth.