What's on that whale? 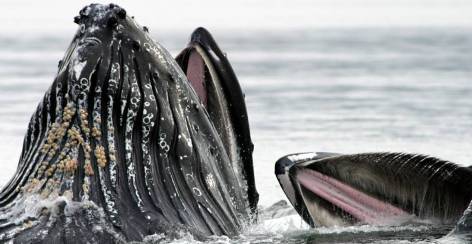 You may be familiar with the phrase “no man is an island”, but chances are you probably haven’t thought of that quote in relation to parasites. We so often forget (or choose to ignore!) that we harbor a countless variety of species, as does almost every creature on the planet. Even whales, animals we usually envision as having sleek, smooth skin, can carry hundreds of kilograms of these hitchhikers on their outer surfaces.

For whales like humpbacks and greys, the two most common hitchhikers found on their bodies are barnacles and whale lice. In fact, if you spot a whale, look closely at its skin and you may find yourself not just looking at one large cetacean, but an entire community of living things.

Hitchhikers have a bad rap

Often these hitchhikers are referred to as parasites, but that term may not always be best when describing the complex relationship between two species. A parasite is an animal that benefits from an interaction with another species, called its host, at the expense of the host. Parasites like tapeworms infect the digestive tracts of their hosts, absorbing valuable nutrients from the host’s meal. Just like people, whales can have tapeworms. The largest tapeworm in the world was found in a whale, and measured over 30 metres long!

Another type of relationship between two species is called commensalism, where one species benefits from an interaction, while the other remains unaffected. Barnacles on some types of whales have a commensal relationship. The barnacles benefit from having a place to settle and filter food from the passing water, while the whales do not seem to suffer any negative consequences from their presence. Unbelievably, one healthy humpback whale was found to have 450 kg of barnacles growing on it! Although that seems like quite a heavy load, that amount of weight for a whale would be the equivalent of a human wearing shorts and a t-shirt.

In some situations, this barnacle coverage can actually act like a suit of armour.  Grey whales are known to roll over when being attacked by Bigg’s (transient) killer whales.  By rolling, they present the attacking whales with a back full of hard, sharp barnacles – a much tougher surface to penetrate.

Have you seen grey or white patches of barnacles on whale skin? It is not known exactly how young barnacles latch on to a whale in the middle of the ocean, but researchers think that whale skin may release a chemical cue that free-swimming larval barnacles are able to detect, somehow initiating the settling process. Exactly how that cue works though is something that researchers are still trying to figure out.

Unlike barnacles, whale lice can only be transferred between animals through bodily contact. They attach themselves to a whale’s skin using hooked legs called dactyli. These legs look similar to those of human louse, which is exactly where they got their name from. In the 1800s, whalers noticed the small creatures and thought they looked and moved like human lice. They assumed they must be the same type of animal, only much larger, as they can grow up to 19mm in size. It was later discovered however, that whale lice aren’t actually lice at all; they are a unique type of crustacean called cyamids.

Many mysteries still surround whale lice, but we do know they are highly specialized. Many types of whale lice can only be found on one species of whale. Grey and humpback whales each have their own variety! While hitching a ride, these crustaceans munch on algae and whale skin. Although that might sound like an undesirable situation for a whale, some researchers believe there is no proof that whale lice are damaging to whales, and thus have more of a commensal relationship with their hosts, like barnacles. However, the amount of hitchhikers on a whale  can offer clues as to the animal’s overall health.

You may remember the juvenile humpback whale that fatally stranded on White Rock Beach last summer, its death attributed to the effects of fishing gear found entangled around its body. Upon examination, researchers found an abundance of whale lice on the young whale’s body. Although it is certain that the whale would have had lice on it before becoming entangled, the larger than expected population indicates the whale had been suffering the negative effects of the fishing equipment for some time.

Stories like this remind us that we are part of the complex community of oceanic animals, and it is not just parasites that can negatively affect them, our actions can too. If you see any dead, injured, entangled or distressed marine mammal, report it to Fisheries and Oceans Canada at 1 800 465 4332.

Grey whales can use their barnacles for defense against predators.

Whale lice are highly specialized, and many types associate with only one or two species of whale.

These crustaceans attach to whale skin at natural openings, such as wounds or scars.