One of the sure signs of spring arrived last week: the first sightings of migrating grey whales off our coast. At this time of year they can be seen close to shore, skimming through mud and sand for the tasty invertebrates that live there. Grey whales use an interesting tool to help them filter these tiny animals: plates of thin, fibrous material called baleen. They are not the only whales to employ the use of baleen, though. An entire group of whales, called mysticetes, rely on this material to feed.

Baleen whales gulp huge volumes of water and use their tongues to force the unwanted sea water between the plates of baleen, which trap their invertebrate prey for consumption. Until recently, it was not completely understood how the many hundreds of baleen plates within the mouths of whales work together to help sustain such gigantic animals, but a recent research project has helped scientists learn more about this fascinating substance.

Baleen whales use this filtering mechanism in three different ways. Grey whales, as mentioned above, use their short, coarse baleen to strain their prey from sediment. Larger whales, like bowheads and right whales, use finer and longer (up to 4 metres) baleen to skim their food from the water column. Humpback whales use short, fine baleen to filter euphausiids (krill) from the water. These whales exert themselves in bursts to secure massive mouthfuls of their quick moving prey.

Baleen is a keratinous material (made of the same material as our fingernails and hair) that continuously grows from a whale’s palate (upper part of the mouth). Like length, which varies from 0.2 to 4 metres, the number of baleen plates in a whale’s mouth also varies. Depending on the species, a mysticete may have 140 to 430 thin plates of baleen, each spaced about one centimetre apart. The plates form a U-shaped filter, with the inside edge of each plate baring a hairy fringe. This fringe is used to trap a whale’s meal and was the subject of the research mentioned above.

The research, conducted by Alexander Werth from Hampden-Sydney College, was published in April’s edition of the Journal of Experimental Biology. Prior to this study, many scientists viewed baleen as a passive tool, but Werth has revealed that the fringe on the inside edge of baleen actually moves to form tangled baskets that further aid in prey capture.

Using several samples of baleen, Werth observed the effectiveness of the material at trapping small latex beads at various rates of flow. What he discovered was that at speeds comparable to that of a foraging whale, the baleen fibres became increasingly matted and tangled, creating a net that trapped more beads than at faster or slower flow speeds. This finding suggests that baleen filters best at the specific speed many whales skim feed at.

If you find yourself exploring the coast sometime soon, keep your eyes out for baleen whales in action as it is a great time of year to spot grey whales foraging along shorelines. Remember, we would love to hear about those sightings! Report any sighting of a cetacean (dolphin, whale or porpoise) or sea turtle to the B.C. Cetacean Sightings Network online (here) or by calling 1-866-I-SAW-ONE. 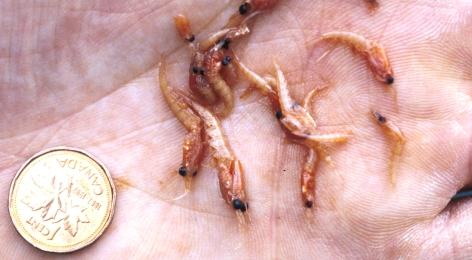 Baleen whales collect about 4% of their body weight a day in prey, which for some whales can consist of euphausiids (krill) like these.

Grey whales can be seen off the shores of British Columbia at this time of year.