There she blows!  But, whoa, what is it?

Even though large whales were nearly hunted to extinction around the world, many of them are starting to make a comeback in B.C. waters.  As a result of low numbers for decades, however, they are unfamiliar to many coastal residents.  Most of the large whales on our coast have the same two key features: they are big and grey.  This can make them tricky to tell apart, and next to the dolphin vs. porpoise mix-up, large whale identification is the second most common ID confusion among BCCSN observers.

The four most common large baleen whales in B.C. are the minke, grey, humpback and fin whale.  All four species are found along our coast in the summer months.  Both grey and humpback whales are migratory, spending their winters in low latitude areas (Mexico, Hawaii, etc.).  Much less is known about the winter habits of fin and minke whales.

Size
Large whales can be easier to find than some of the smaller species because, with the exception of the minke whale, the blow made by their exhalation can be seen from a long way away.  Once you find a large whale, however, distinguishing one species from another can be a more difficult task.  Let’s start with size and shape:

*for context, the average school bus is approximately 12 m.

Smaller whales, like the minke, will often have both their blowhole and dorsal fin at the surface simultaneously.  Alternately, a fin whale’s blowhole will disappear underwater before the dorsal fin appears because they are so large.  That being said, it’s important to remember that depending on the age of the animal, they may be smaller and that many of these species have size ranges that overlap.  Using additional features other than size is the best bet for making a positive ID.

Dorsal Surface
Since the dorsal surface is usually the only side you get to see, watch for colouration and dorsal fin presence, shape and size:

Unique Features
Of course, each species has some unique features.  If you have a chance to see one these, identification can be much easier:

Minke whale: White band present on the top side of each dorsal fin
Grey whale: Patches of barnacles evident, especially on the head
Humpback whale: Bumps or knobs (known as tubercles) on the rostrum (pointy part of the head); extremely long pectoral flippers with white undersides
Fin whale:  Bi-coloured lower jaw with one half white and one half dark

Behaviour
All four of these species can be seen feeding along the coast of B.C. during the summer.  Minkes, humpbacks and fin whales are all rorquals, meaning they have heavily pleated throats that allow them to expand their oral cavity and take in large volumes of water and prey.  Grey whales are not rorquals; instead, they have only two pleats on their throats that can be hard to see.  Here are a few other behaviours you may also notice from each specie:

Minke whale:  A quick glimpse is often all you will see of these whales – they often surface once and then disappear! Minke whales rarely fluke (show their tail as they dive).
Grey whale: Usually seen feeding near shore in sandy or muddy-bottom area.  They sometimes roll onto their sides in shallow water to feed along the bottom, where they scoop small invertebrates from the sand.
Humpback whale: The most acrobatic of the large whales, they can be seen breaching and tail or flipper slapping.  They often lunge through the water to capture their prey and may even employ bubblenets! After a series of surfacings they regularly “fluke,” showing their tail as they dive deep.
Fin whale:  The fastest of these four large whales, fins can reach speeds of 50 km/hr.  Fin whales rarely fluke.

Distinguishing between the large whales in B.C. takes a bit of practice and a keen eye.  If you encounter one, note their dorsal fin, colouration, size and any special features.  Photos are always a huge help! Learn more about each of these species in B.C. here and remember to report any that you see. 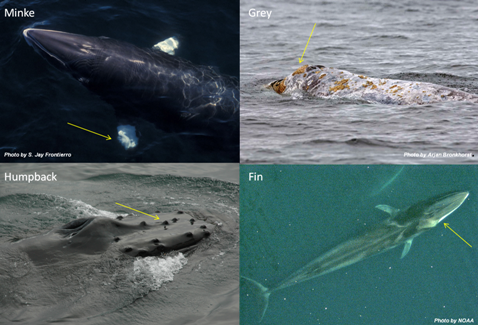 Above: Each species has unique features that can help with identification. 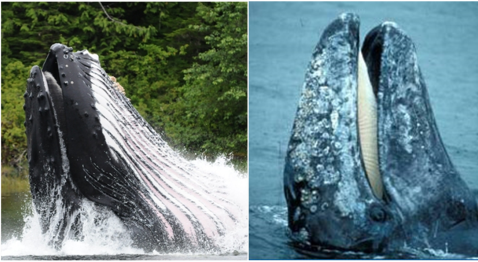 Above: Minke, humpback (pictured) and fin whales are rorquals, meaning they have heavily pleated throats. Grey whales are not. 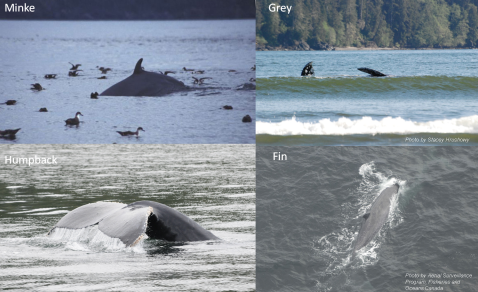 Above: While harder to distinguish, these four species often differ behaviourally.