SOS summer: A season of rescues

Looking back on the cetacean stories of this summer, one theme stands out: Rescue.  In a time of increasing concern over the state of our oceans, these feel good stories are a welcome change.  Now that summer is winding to a close, here is a recap of some of the highlights:

In early July, news of a new calf in the northern resident killer whale population had many of us cheering.  While killer whale calves are born every year, this new addition has an extra-special mother, Springer.  Springer, scientifically known at A73, was the first killer whale rescued, rehabilitated and reunited with her pod in the wild back in 2002.  The news that she was now a mother was the icing on the cake of this rescue story.  As described by Graeme Ellis at Fisheries and Oceans Canada (DFO), who first saw Springer and her new calf on July 4, her new motherhood is the “ultimate sign of success.”  She has not just re-joined this population, she is now contributing to it.  Learn more about Springer here.

August: Alone in the bay

Finding young killer whales alone and in need of help like Springer is a fairly rare occurrence, so it was a surprise for researchers to find just that in a little bay on Aristazabal Island in late July.  The small, solo whale was identified at T46C2 (a Bigg’s/transient killer whale) and nicknamed “Sam”.  While Sam appeared to be in good condition originally, he/she appeared stuck in the bay by the maze of islets and shallow bottom surrounding the opening. Working collaboratively with DFO, Vancouver Aquarium staff monitored Sam regularly.  Unfortunately, by mid-August, Sam had not left the bay and was showing signs of poor nutrition due to a lack of available food in the area.

On August 15, Vancouver Aquarium and DFO research teams decided to help Sam make his/her way out of the bay. They slowly towed a floating line across the harbour to herd the whale towards the entrance while simultaneously playing transient killer whale calls as a lure outside the harbour. They were successful on the first attempt and Sam quickly moved out of the area.  On Aug 31, Sam was spotted again, this time 150 miles south, in the Broughton Archipelago.  Sam was still alone, but in a better area for finding prey and other Bigg’s (transient) killer whales.  Read more on Sam’s story here and here.

Like the great weather, the summer’s rescue theme has followed us into September with two stories already this month.   The first is a story of a grey whale spotted trailing crab gear on September 4 off Makah Bay, Washington.   American officials were able to attach a buoy and transmitter, but unfortunately lost contact with the whale.  Several days later, the whale was found in B.C. waters near Carmanah Point on western Vancouver Island.  Unfortunately, well-meaning fishermen cut off the transmitter that would help rescuers to find the whale, but luckily it was spotted again.  On September 7, DFO officials who are trained in disentanglement were able to respond and remove the encumbering gear.  The whale showed a marked improvement in energy after it was free.  See here for the full story  and here for more on whale entanglement.

The second “swim-free” story of September involves a male harbour porpoise nicknamed “Levi”.  Levi was discovered stranded in March near the Saanich on Vancouver Island.  A quick response by a local citizen and Cetus Research and Conservation Society was followed by his transfer to the Vancouver Aquarium Marine Mammal Rescue Centre.  Levi was gravely ill and unable to swim on his own. He began receiving intensive treatment as well as 24 hour care.  While his prognosis at the beginning was bleak, he defied odds by showing continual improvement throughout the spring and summer.  Eventually, Levi began eating live fish on his own and appeared to have made a full recovery.  On September 10, he was released back into the wild, a touching and memorable day for the staff and volunteers who invested 1000s of hours into his rehabilitation.  Levi’s whole story can be found here.

While the summer of rescue stories has had many happy endings, it’s important to remember that human-caused threats will continue to impact these animals if we don’t all make a more concerted effort to protect our oceans.   See here for some ideas on what you can do.  If you see a marine mammal in distress, contact the Marine Mammal Incident Reporting Hotline at 1 800 465 4336 immediately. 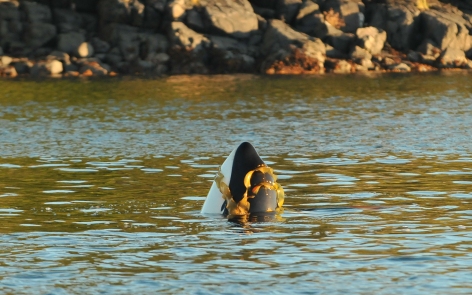 Sam (T46C2) was found alone in a isolated bay off Aristazabal Island. Eventually, intervention was required to give this little whale a better chance at survival.

Levi, a male harbour porpoise found stranded and very ill in March, was released back into the wild in September.