Peering into the past: Cetacean Evolution 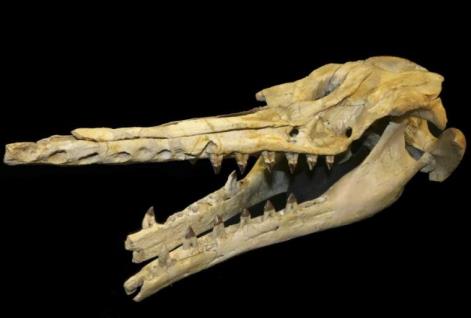 Is it just me, or are ancient oceans all over the news right now?  Since the start of 2014, a handful of articles caught my eye with their stories of the sea millions of years ago. In February, the journal Geodiversitas contained an article on a bed of marine mammal fossils from 5-25 million years old found in California that, among other things, includes a new species of balaenopterid (related to minke, fin and blue whales!) (link).  Then, the journal Proceedings of the Royal Society B. released a paper on the reason behind multiple whale stranding events spanning over 20 million years in Chile (link). And in mid-March, Nature featured an article on the fossil of Cotylocara macei that reveals the early origin of echolocation in toothed cetaceans (link).

All this buzz about ancient oceans has got me thinking about whale evolution.  What were the first whale-like animals? 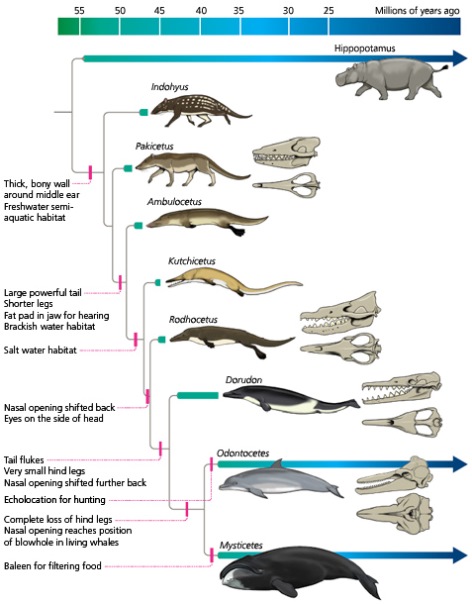 The oldest fossilized cetaceans have been grouped together in a suborder called archaeocetes.  Looking at them, you would never think these mysterious creatures would be related to modern day whales.   They were land-dwelling animals and many of the earliest known archaeocetes had functioning hind limbs, spending only some of their time in the water.  Their teeth showed differentiation (molars, canines, incisors) unlike modern whales and instead of a blowhole on the top of their head, their nostrils were located on the tip of their snout.

The earliest known well-preserved archaeocete fossil is that of Pakicetus.  The fossils of this wolf-sized creature have been found in Pakistan and date back to the early Eocene, approximately 50 million years.  While Pakicetus and other archaeocetes likely resembled a land mammal externally, their skulls — particularly in the ear region, which is surrounded by a bony wall — strongly resembles those of living whales and are unlike any other group of mammal.  Fossils of these early archaeocetes also showed ankle bone characteristics that link them to the artiodactyls.  Artiodactyls are a large order of even-toed hoofed mammals that includes hippos, pigs, sheep, cows, deer, giraffes, antelopes!  While one did not evolve from the other, hippos are probably the closest extant evolutionary cousin to whales today. 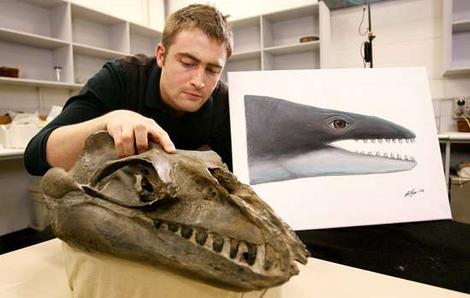 Throughout the Eocene (55.8 to 33.9 million years ago), species evolved that represent intermediates between a primarily terrestrial, amphibious and fully aquatic lifestyle.  For example, Ambulocetus likely used paddle like hind legs to propel itself through the water and used it’s jaw bone to funnel sound to it’s inner ear, similar to modern whales, but did not live a fully aquatic life.  By the late Eocene, archaeocetes were also being found in many areas of the world.

The first whales that were probably fully aquatic- the basilosorids and dorudontids- occurred around 40 million years ago.  While small hind limbs were still present, they were severely reduced and probably didn’t function in locomotion.  Their skeletons began to change, likely indicating the undulating swimming movement we now think of with whales and their nostrils were also further up on the snout, facilitating easier breathing at the surface.

The first echolocating odontocetes (toothed whales) and filter feeding mysticetes (baleen whales) first arose in the Oligocene around 35 million years ago and rapidly diversified in a quick amount of time (evolutionarily speaking, 5 million years can be considered ‘quick’!). While we now associate mysticetes with their long, comb-like fringe for filter feeding, the first mysticete actually had teeth!  The fossil of Janjucetus hunderi, an early mysticete found in Australia, revealed an animal that had similar ear and skull characteristics of baleen whales but its mouth contained sharp, pointed teeth!   12-15 million years ago, many families of whales still found today (including the Balaenopterids) first appeared.

Today, there are over 80 living species of whales that roam the oceans, while more than 400 other species are known to have gone extinct.  Like all evolutionary processes, the diversification and radiation of these animals would have been driven by the changing environment around them.    Changes in world geography, water temperature and ocean productivity would have greatly shaped the evolution of whales and the success of various forms.

Understanding cetacean evolutionary  history is a work in progress.  Palaeontologists continue to uncover fossilized whales in many parts of the world that provide more clues on how these animals arose.  Understanding ancient whales may just help us better understand the species that exist in the sea today.

Want to learn more about cetacean evolution?  Check out these links:

–The Evolution of Whales (Understanding Evolution)

–Whales Evolved in the Blink of an Eye (Live Science)

–The Sharp-toothed Past of Filter Feeding Whales (New Scientist)