The case of the flopped-over fin

Last week I received a puzzled phone call from one of our outreach volunteers here in Prince Rupert.  She had been down on the docks collecting sightings from boaters and fishermen, when she received a report of a curious whale.

The report was of a group of killer whales, but one male was unlike any the observer had ever seen before.  Instead of the usual straight, tall dorsal fin, its entire fin was flopped over to the side, flat against its back.

As I listened to her recount the sighting, I had a sneaky suspicion that I knew who the whale was.  After all, a completely flopped over fin is not a terribly common sight on a wild killer whale.  Without photographic proof I couldn’t be certain, but if I was a gambler, I would have placed my money on B13.

B13, also known as Yuculta, is a male northern resident killer whale born in 1987.  His matriline is known as the B7s and includes his mother, his brother and sister, and his sister’s calves.  He is one of the most easily identified northern residents due to his flopped over fin, which rests along his back to the left.  See a video of this matriline shot near Ketchikan, Alaska this year here.

Yuculta’s (B13) fin was curled before it completely collapsed (Black and white photo courtesy of DFO).

While deducing which whale the observer saw wasn’t too puzzling, figuring out why Yuculta’s fin is flopped over is a bit more baffling.  As a juvenile, his fin, like all juvenile males and females, would have been small and curved.  As killer whales mature, however, males and females show sexual dimorphism (males and females look different).  Male killer whales begin to “sprout” in their early teens and their fin begins to grow.  It takes until their late teens to reach the full height, sometimes reaching 1.8m (6ft) tall!  Females always retain and smaller, more curved fin.

Yuculta’s fin was curved and ruffled through his teens and it fully flopped over in the summer of 2006 when he was nineteen years old.  Eight years later, his unusual fin hasn’t regained any rigidity, but does not appear to impede his survival.

A killer whale’s dorsal fin consists of dense connective tissue comprised of collagen fibers.  There is no bone inside.  This type of tissue is vulnerable to injury and many killer whales, both male and female, bear permanent scars to their dorsal fins from injuries.  Additionally, many male killer whales show signs of wrinkling in the fin as they age and some show partial flops or collapses.  In fact, Yuculta’s brother, Slingsby (B10), also has a buckled dorsal fin, making them a very distinct family.

A cross section of a killer whale dorsal fin shows the dense connective tissue inside, but no rigid bones.

The number of wild male killer whales with abnormal dorsal fins appears to vary from population to population.  Dr. Ingrid Visser reported that in the late 1990s, 23% of the males in the New Zealand population of killer whales had collapsed, collapsing or bent dorsal fins.  Of these, however, only one male was known to have a fully folded fin.  During that same time, the number in B.C. was less than 5% and in Norway only 0.57%.  Currently, of the killer whale populations that use B.C. waters, there are several males with “hooked” dorsal fins (where the top is curled over) and several fins with significant abnormalities, but only Yuculta is known to have a fully flopped fin.

There have been many theories as to why fins collapse in wild killer whales, including injury, age, stress, dehydration and poor health.  As Yuculta has survived eight year thus far with a fully flopped fin, it is likely this state is due to an injury as opposed to any major stress or illness. 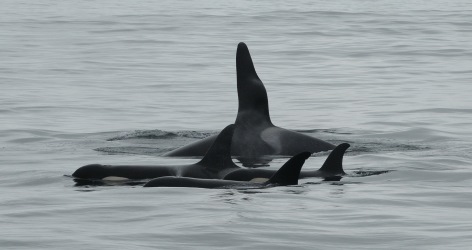 Members of Yuculta’s family (the B7s), including his brother, Slingsby (B10), that also has an abnormal fin.

This summer, keep your eye out for Yuculta and his family.  As members of the northern resident population, they can usually be seen from northern Vancouver Island to the North Coast in the summer where they feast on chinook salmon.  If you spot them, or any other whales, dolphins or porpoises, make sure to report them to the B.C. Cetacean Sightings Network online here, via email ([email protected]) or through our toll-free number (1 866 I SAW ONE).

Yuculta's (B13) fin was curled before it completely collapsed (Black and white photo courtesy of DFO).

Members of Yuculta's family (the B7s), including his brother, Slingsby (B10), that also has an abnormal fin.

A cross section of a killer whale dorsal fin shows the dense connective tissue inside, but no rigid bones.