The B.C. Cetacean Sightings Network has a diverse array of observers, from float plane pilots to ship captains to owners of waterfront property. The Network is also fortunate to receive support from a number of research and conservation organizations along the B.C. coast, who contribute their invaluable sightings of cetaceans (whales, dolphins and porpoises) and sea turtles, often from remote locations. Lauren Portner, a frequent reporter to the Network, shares her experience collecting sightings data through her work with the Salmon Coast Field Station:

Summer of 2009. The season that opened my eyes to the wonders of the British Columbia coast and the Broughton Archipelago, a cluster of islands between northern Vancouver Island and the B.C. mainland. That season was the first of many spent on the water observing the marine mammals of the area and the natural world around me. My appreciation for these animals has only grown since then.

Echo Bay, a small community that sits on the northwest side of Gilford Island in the Archipelago, is home to (among other things) Salmon Coast Field Station Society. Founded in 2006, Salmon Coast is the former residence and field station of Hon. PhD Alexandra Morton, a biologist currently known for her work pertaining to viruses found in wild salmon. Today, the Station is well known for generating ground-breaking research and scientific literature relating to open net Atlantic salmon farms and their relationship with the wild Pacific salmon that travel past these farms on their annual migrations.

The evolution of Salmon Coast’s current research focus began with Morton’s observation and cataloging of the northern resident killer whales (Orcinus orca) that frequented Echo Bay and the surrounding areas in the early 1980s. For this reason, the Station’s history as an institution is rooted in the sighting and reporting of cetaceans and other marine mammals off the B.C. coast. As a researcher who has returned seasonally to work out of Salmon Coast for the last 8 seasons, I’ve been privileged to witness exciting events such as the rebound of the humpback population and the return of the sea otter to inside waters. I’ve been fortunate to have so many truly awesome cetacean encounters over the years. Everything from Bigg’s (transient) killer whales successfully hunting Dall’s porpoise to humpback whales (Megaptera novaeangliae) trap feeding, a behavior that has only been documented around the northern end of Vancouver Island.

In recent memory, the most powerful encounter I’ve had involved members of the northern resident killer whale population in and around Blackfish Sound and Blackney Passage. With the engine of our Station boat, Big Yin, turned off, we drifted at the northwestern entrance to Blackney Pass. A group of approximately 30 killer whales headed our way and surrounded us on all sides, passing at comfortable distances from our boat, spread out from one side of the channel to the other. To drift in the clearing fog surrounded by members of the A23 and A25 matrilines, watching them surface, hearing them breathe and eventually seeing them disappear was incredibly moving. It was an encounter that few people are fortunate enough to have. I count myself eternally grateful for sightings such as these.

Salmon Coast has played a vital role in documenting cetacean sightings throughout the Broughton Archipelago, Johnstone Strait, Queen Charlotte Strait and Blackfish Sound. The research teams based out of the Station cover a large expanse of water, which allows for hundreds of sightings and reports each year. As well as reporting the location, species and numbers of these animals, in recent years, the station has supported the north island whale research community by taking photos that allow for identification of individual orcas and humpbacks while also noting their behaviour. With the expertise of members of the Marine Education & Research Society (MERS), the identification of specific individuals lends detailed and pertinent information to the sightings that are reported by the Station and its researchers. 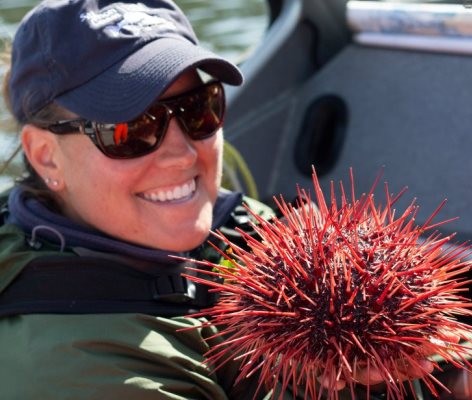 The B.C. Cetaceans Sightings Network is a valuable branch of the Vancouver Aquarium that supports citizen scientists all along this coast. With its WhaleReport App, available for iOS and Android devices, it’s easy and straightforward to report cetacean sightings. If the traditional route of recording on paper is more in your wheelhouse, the Network can provide logbooks that are submitted at the end of each year.

For more information about Salmon Coast Field Station Society, you can visit their website at http://salmoncoast.org/ or email [email protected].

For more information about the Marine Education & Research Society (MERS), visit their website at http://mersociety.org/.