In B.C. waters, there is a whale that can power through the ocean with bursts of speed up to 46 kilometres an hour, take in up to 70 tonnes of sea water with a single gulp, and is the second largest animal on earth. This is the fin whale (Balaenoptera physalus) – and after a huge decrease in the population from whaling in the twentieth century, they’re now starting to show up in some unexpected areas of Canada’s Pacific coast.

Fin whales in B.C. are generally found in the deeper waters of Hecate Strait, offshore west of Vancouver Island and along the continental shelf break. However, in 2015 and 2016 there were some unusual sightings of fin whales in the protected waters of the Salish Sea.

In September 2015, a fin whale was sighted just east of Victoria, near the San Juan Islands – this was the first time in ten years that a fin whale had been seen in the inland waters of the Salish Sea. The following summer, in both July and August 2016, fin whales were sighted in Juan de Fuca Strait, south of Victoria. And two months later, in October 2016, a fin whale was reported even further east, near Orcas Island in the San Juans.

Further north in the Salish Sea, in August 2016 a fin whale was seen in the very shallow waters of the Comox Marina in the Strait of Georgia – the first sighting of a fin whale in that area and a real surprise for onlookers at the marina! This animal was missing part of its tail fluke, possibly an indication of a previous interaction with a vessel.

Since 2010, an increased number of fin whales have also been seen in the area of Caamano Sound, near Hartley Bay on B.C.’s central coast. Johnstone Strait (north-eastern Vancouver Island) has also seen an increase in fin whale sightings since 2010, most frequently in the summer and autumn months.

Between 1905 and 1967, it is estimated that at least 7,600 fin whales were taken by coastal whaling operations in B.C. for their baleen, oil and blubber. Fin whales haven’t been hunted in B.C. waters since 1971 but they are currently estimated to be below 50% of their population levels of 60 to 90 years ago. (Gregr et al, 2006) Given that fin whales have a life span of 50 to 100 years, recovering from such population decimation is a slow process and the Pacific fin whale population is currently listed as Threatened under the Canadian Species at Risk Act.

While whaling is no longer a threat in B.C. waters, fin whales are at risk from ship strikes. Fin whales are the most commonly struck whale in the world, although it is not known why this is the case. In 1999, 2009 and 2015, dead fin whales were brought into Burrard Inlet on the bulbous bows of cruise ships and between 1999 and 2004, at least 6 fin whales were hit and killed in BC’s waters.

As fin whale numbers increase on the B.C. coast, the risk of vessel strikes is also likely to increase, particularly as fin whales are now being sighted in the high vessel traffic areas of the Salish Sea.  The B.C. Cetacean Sightings Network uses sightings data to identify areas of high whale abundance, where it is critical that vessels (both large and small) take extra caution to prevent hitting whales.

The Mariner’s Guide to Whales, Dolphins and Porpoises of Western Canada, a collaboration between the Coastal Ocean Research Institute, the Port of Vancouver and the Prince Rupert Port Authority, provides information to large vessel operators on how to mitigate the impact of vessel strikes on cetacean species in B.C. waters.

If you see a fin whale, send your sighting to the BC Cetacean Sightings Network online, through the WhaleReport app or call 1866 I SAW ONE. 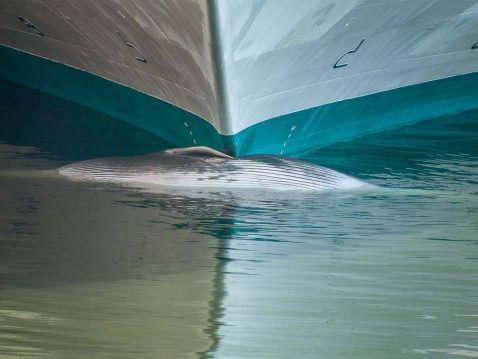 A dead fin whale on the bow of a cruise ship in Vancouver harbour. 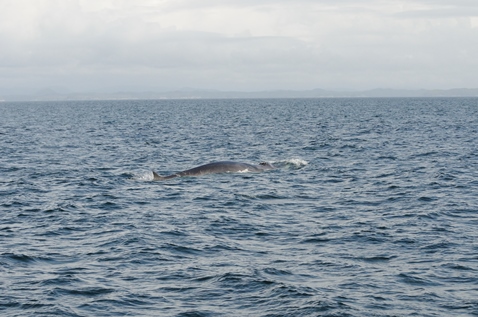 Fin whales are usually found in the deeper waters of Hecate Strait, offshore west of Vancouver Island and along the continental shelf break.