Entanglement of whales in fishing gear has increasingly been in the news over the last several years, perhaps most memorably with the humpback that stranded in White Rock in 2012, entangled in plastic long line.

On the B.C. coast the habitats of whales, dolphins and porpoises often overlap with human activities that can have harmful impacts on individual cetaceans, and populations as a whole. Entanglement in commercial fishing and aquaculture gear (both active and derelict) can cause significant injuries to whales, with gear wrapping around pectoral fins, tails and mouths cutting into their body and affecting their ability to swim and feed, leading to death by starvation. Whales can also be anchored in place by fishing gear such as crab and prawn traps and aquaculture gear, causing them to drown. Entanglement is a significant threat to cetacean populations on the coast of British Columbia, and worldwide. 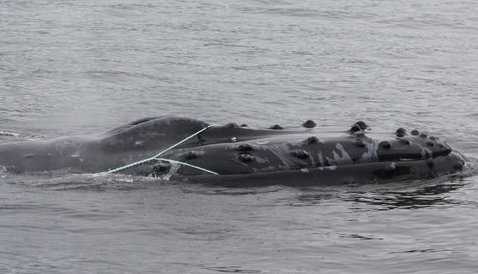 Humpback whales have been returning to B.C.’s waters in increasing numbers since 2004, following the depletion of their population from whaling operations that ceased in 1966. The habitat of humpback whales in British Columbia includes protected nearshore waters, where aquaculture and commercial fishing activities also take place and to date they have been the most commonly reported entangled cetacean on Canada’s Pacific coast.

In 2016, the BC Marine Mammal Response Network (BCMMRN) received 23 reports of entangled whales on the B.C. coast, of which 22 were humpbacks, and one grey whale. Six of those whales were successfully disentangled and three whales died. Five whales were freed when the fishing gear came off on its own over time. The fate of the other nine whales is unknown as they were not re-sighted after the first report. This is the highest number of whale entanglements reported in a year to date in B.C. – in past years the BCMMRN has received an average of 10 to 15 entanglement reports annually. 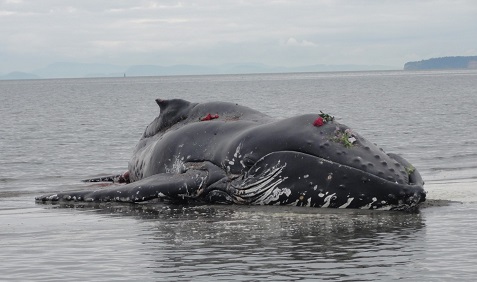 In 2012, a young humpback stranded on the beach in White Rock, B.C. The whale was severely emaciated after being entangled in longline fishing gear for a prolonged period.

Because much of the B.C. coast is wild and remote, the full extent of cetacean entanglement is unknown and it is thought that many whale entanglements, and resulting deaths, are unnoticed and unreported every year. In order to gather more information about the extent of whale entanglement in B.C. waters, the Marine Education and Research Society (MERS) has been undertaking a scar study of humpbacks on the British Columbia coast, monitoring humpbacks for scars and injuries from entanglement in fishing gear as well as documenting and assisting with reported entanglements. From their preliminary study looking at scarring on humpback tail stocks, it is estimated that as many as one out of two humpback whales in B.C. waters have been entangled in fishing gear at some point. 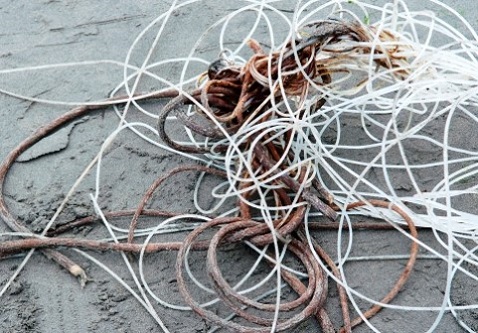 How can we mitigate the threat of entanglement to whales in our oceans? A recent study from researchers in Massachusetts suggests one potential solution: the use of rope in fishing operations with a reduced breaking strength that would allow whales a greater chance to break free from entanglements. Looking at whales entangled in fishing gear on the east coast of the United States and Canada from 1994 to 2010, the study results concluded that the adoption of ropes with a lower breaking strength than those currently used could reduce the number of life-threatening entanglements for large whales by at least 72%, while still providing enough strength for fishing operations. (Knowlton et al, 2016)

What You Can Do

As summer and boating season approaches, there are a few things that you can do when you’re out on the water.

* If you see an entangled marine mammal or sea turtle, call the BC Marine Mammal Response Network immediately at 1-800-465-4336 – they are available 24 hours a day. If you are out of cell reception, call VHF Channel 16.

* Stay with the animal if possible (at a safe distance of at least 100 metres) until the marine mammal responders arrive.

* Do not approach the entangled animal or attempt to disentangle it yourself. Follow the instructions of the marine mammal response experts.

* Watch for whales, dolphins and porpoises when fishing and remove fishing lines or nets if they are present.

* To help clean up and remove materials that could entangle marine animals, participate in the Great Canadian Shore Cleanup! In 2015, participants removed over 7,000 metres of rope from BC’s coast. 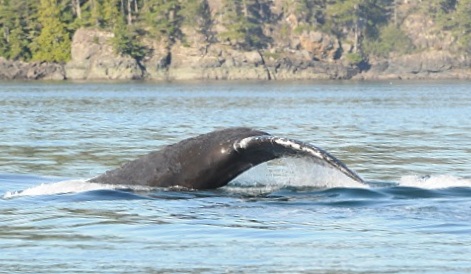 Humpback BCY0729 (known as Argonaut) with scarring from an entanglement.

In 2012, a young humpback stranded on the beach in White Rock, B.C. The whale was severely emaciated after being entangled in longline fishing gear for a prolonged period.

A sample of the line that entangled the White Rock humpback whale.