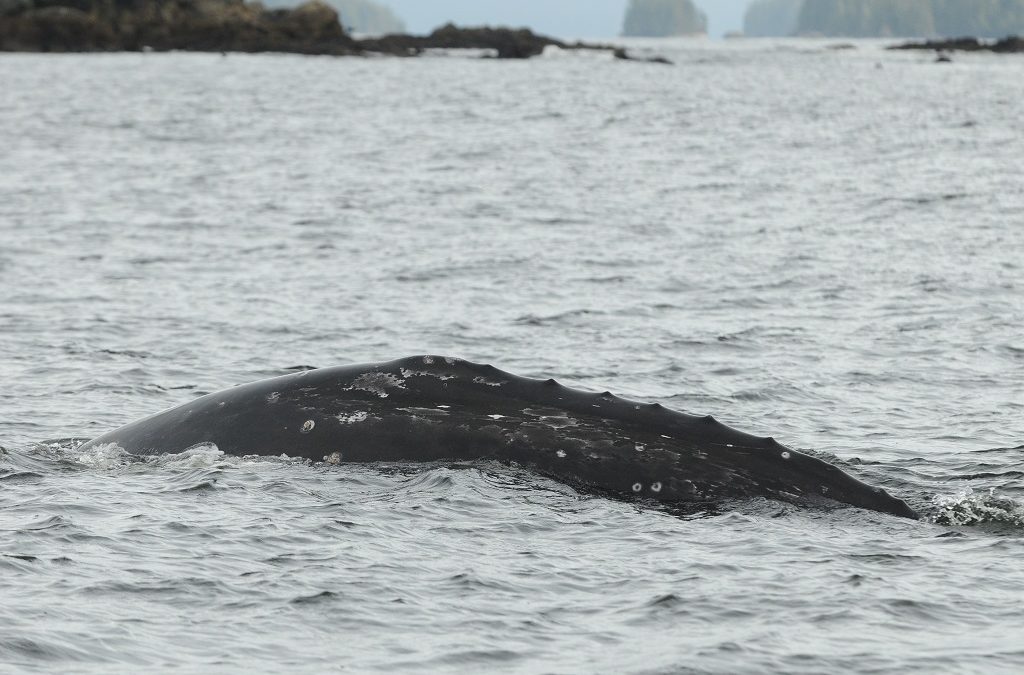 On Dec 4, 2017, COSEWIC (Committee on the Status of Endangered Wildlife in Canada) announced recommendations for changes to listings of 44 wildlife species under the Species at Risk Act (SARA). This non-governmental committee of scientists assesses and designates the conservation status of species in Canada.  COSEWIC has recommended an endangered listing for two of the three populations of Pacific grey whale (Eschrichtius robustus) that use Canadian waters.

Grey whales are found only in the North Pacific Ocean. A population of grey whales once existed in the North Atlantic as well, but they were extirpated by hunting by the 17th century1.  This species is strongly migratory, traveling more 15,000 km from southern breeding grounds to northern feeding grounds annually1.  Newborn calves follow their mothers to foraging areas, and return faithfully each year to their mother’s migratory destination2.

The Eastern Pacific Population has been further divided into three distinct groups. All three groups winter in Mexican waters and migrate up the Canadian coast to feed in different regions.  The largest population, which forage in Alaska, was assessed by COSEWIC as ‘Not at Risk’.  The two other groups-a remnant population that summers along the Russian coast, and a small group that feeds in scattered locations throughout BC and California-were both assessed as ‘Endangered’.

The small population that is found in BC waters during the summer and fall is comprised of approximately 100 individuals, and is known as the “Pacific Coast Feeding Aggregation”. These animals do not migrate to feeding grounds in Alaska, and instead forage in scattered locations from Central California to Kodiak Island, AK.  Scientists have determined that these animals are genetically differentiated from the Alaskan population, and therefore warrant separate management for conservation3.

Another small remnant population can be found summering in the waters around Sakhalin and Kamchatcka in Russia4.  Until recently, these animals were thought to be members of the Western Pacific Population, but their winter range had not been determined.  In 2011, researchers from Oregon State University attempted to solve this mystery by attaching satellite-monitoring tags to seven grey whales in these Russian feeding grounds.  The results were surprising; rather than migrating south towards Japan, three individuals began migrating eastward towards the Bering Sea2.  Two of the tags transmitted long enough to reveal their migratory patterns.  One male, named “Flex”, reached the Oregon coast before his tag stopped transmitting.  Another tag, placed on a female called “Varvara”, travelled from Russia to breeding lagoons in the Baja, and then travelled back to Russia the following summer-a round trip of over 22,511 kilometres!  Recent studies provide evidence that animals that follow this migration route are genetically distinct from other members of the Eastern Pacific Population, and should be managed as a separate unit under Canada’s Species at Risk Act4,5. 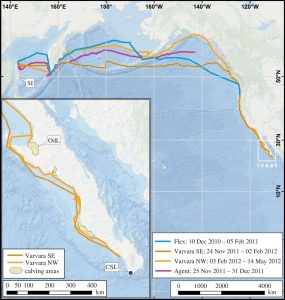 Although the Eastern Pacific grey whale population has recovered overall from 19th century whaling, it is threatened by increasing development and human activity in Mexican breeding lagoons1.  Additionally, Grey whales are susceptible to vessel strikes6, acoustic disturbance from shipping, changes in ice cover at Arctic feeding grounds, disruption of benthic feeding habitat, and entanglement in fishing gear and other marine debris1.  Mortalities due to exposure to these threats could lead to a loss of genetic diversity for the two small, genetically isolated sub-populations of grey whales that utilize BC’s waters, warranting COSEWIC’s recommendation of an endangered listing for these groups.

You can help protect grey whales in BC waters! Report your grey whale sightings to the BC Cetacean Sightings Network to help inform researchers of the relative abundance, distribution, and habitat use of these animals.  Follow the Be Whale Wise Guidelines while on the water to decrease the chance of vessel strike.  Grey whales travel close to shore during their northward migrations, and following the Whale Trail is an excellent way to view these magnificent animals from land without causing vessel disturbance.  If you are a commercial mariner, refer to our Mariners Guide to Whales, Dolphins, and Porpoises of Western Canada to learn more about how you can reduce the impact of your vessel.  Help remove marine debris by participating in a shoreline cleanup, and report any incidences of grey whale entanglement to the Marine Mammal Incident Reporting Hotline at 1-800-465-4336.