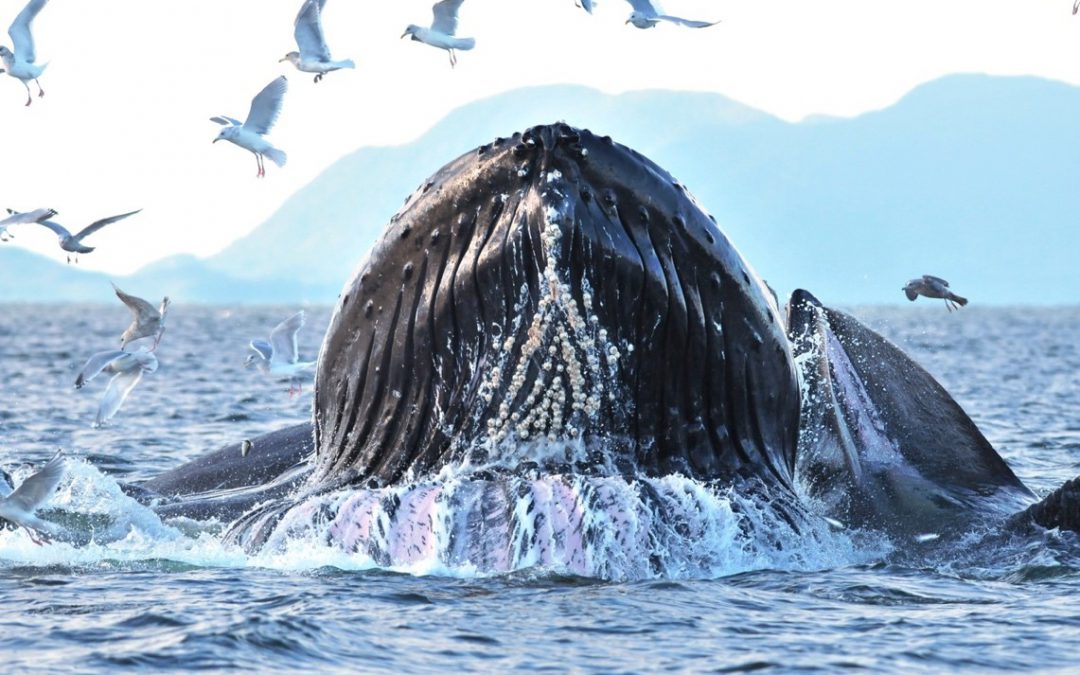 By this time of the year, many humpback whales (Megaptera novaengliae) have already started their impressively long migration south.  Those from the northern hemisphere travel from their summer feeding areas in temperate-cold waters to breed for the winter in subtropical-tropical waters. Since the seasons are reversed each side of the equator, humpback whales in the southern hemisphere also head south towards the pole to feed at the same time, meaning these whales don’t normally cross paths.

North Pacific Humpback Whales typically spend spring through fall months feeding in coastal and continental shelf waters from northern Japan in the West, into the Bering Sea in the North, and to California in the East. When it comes time for breeding, they head to one of four main regions in the North Pacific which include Hawaii, Mexico, Central America (all the way down to Costa Rica), and Asia (Islands south of Japan, Taiwan, the Philippines) (Ford, 2014).

Much of this is known due to a massive ocean-wide study of humpback whales called SPLASH, which involved the collaboration of over 400 researchers and 10 countries. This project started back in 2006, and was initiated to understand linkages between breeding grounds and feeding areas in the North Pacific.  Using photo-identification and DNA analysis, researchers were able to determine population abundance and migratory connections, revealing a complex population structure resulting from strong site fidelity or tendency to return to each year to the same location for feeding.

This study also helped us understand that many whales we see in SE Alaska and Northern B.C. go to Hawaii to breed, compared to humpbacks in feeding in waters in California and southern B.C, who winter in Mexico. Like many things, there are exceptions to these general migration routes; some whales are known to roam widely and switch breeding grounds from year to year. For instance, one photo-identified humpback migrated from Ogasawara Islands (south of Japan) traveled all the way to  the west coast of Vancouver Island – a mere 15,000 km roundtrip swim! 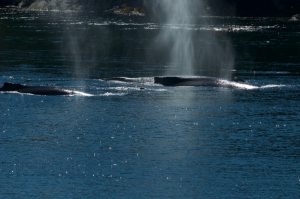 Not all Humpbacks Migrate South?

Interestingly, despite being strongly migratory, humpback whales are seen during all months of the year along the coast of B.C.  The timing of migration varies quite widely.  Some animals leave to head south as late as January or February, and can overlap with early arrivals returning from breeding grounds. In fact, humpback whales can achieve the trip from Alaska to Hawaii in as little as 36 days! (Gabriele et al., 1996).

Using a unique whale ID photo taken with powerful camera zoom lenses allows researchers to determine a seasonal attendance pattern. For example, a humpback whale would need to be sighted at least once within 60 consecutive days to be able to state confidently that two full oceanic journeys had not taken place. If the same whale was identified sufficiently throughout the winter, we know that it never made the journey south.

Here in our North Coast office in Prince Rupert, we have recorded whales that stay through the winter, a behavior that has also been noted elsewhere, and might even be increasing. What exactly are these overwintering humpback whales doing?  Scientists are still researching why certain whales might stick around, and some theories include that these whales might not plan to breed that year, might have recently produced offspring, or are feeding to replenish low food reserves. In Alaska, researchers found that 2% of identified individuals overwintered, including a mother and calf pair, and observed that these whales are primarily feeding on herring (Straley et al., 2017).

Questions around overwintering humpback whales along the BC coast remains unanswered, warranting further research. The North Coast Cetacean Research Initiative is compiling a catalogue of local humpback whales near Prince Rupert, which will allow us to better understand which whales are present in different seasons and why.  This winter we will be heading out to continue collecting photo ID’s of these wintering humpback whales, along with samples of what they are eating and the sounds they are making. With any luck, we will continue working to solve this puzzle, one whale fluke at a time. 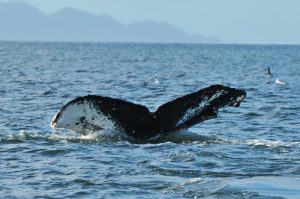 For more information on SPLASH by the Cascadia Research Collective:  http://www.cascadiaresearch.org/projects/splash-structure-populations-levels-abundance-and-status-humpback-whales-north-pacific