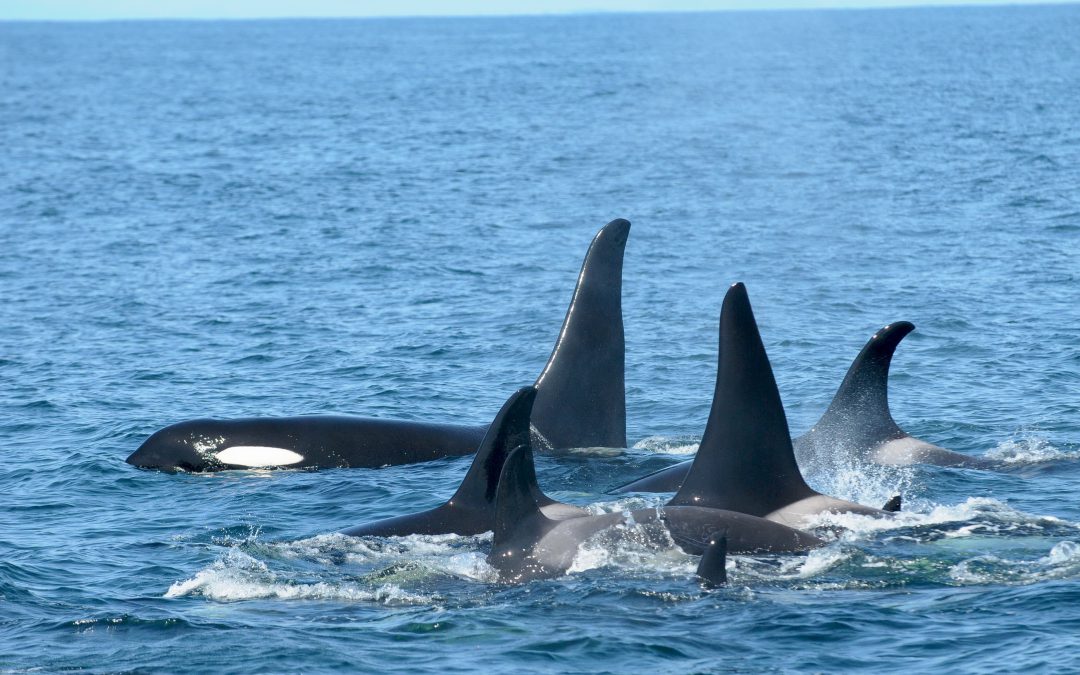 Article By Kathryn Gibb, volunteer blogger with the BC Cetacean Sightings Network.

With summer upon us, we’ve traded in our flannel blankets for beach towels. Everyone loves a day at the beach: lather on the sunscreen, find a spot on the sand, and enjoy a good book! It turns out humans are not the only mammalian species that enjoy a day at the beach. Researchers and citizen scientists are learning more about the beach-going habits of some Northern resident killer whale pods in British Columbia. 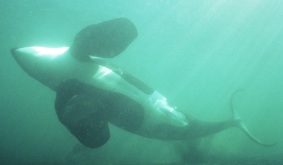 A Northern resident killer whale rubs along the pebbly shore in the Robson Bight Ecological Reserve.

Northern resident killer whales visit beaches with very specific characteristics: steep slopes away from shore with loose, smooth rocks. The group approaches the beach, empty their lungs to decrease buoyancy and flip every which way as they rub along the length of the rocky shore. Beach-rubbing appears to be a behavioural trait unique to Northern residents; Southern residents, transients, and offshore killer whales have never been observed displaying this behaviour.  It is unclear whether beach rubbing serves any physiological purpose, or if it is done just for the fun of it.  Researchers are led to believe that it is simply a recreational activity, since all killer whales naturally slough their dead skin without the use of rubbing beaches.  If beach rubbing was done for health benefits, presumably it would occur across all killer whale populations, not just in the Northern resident population. 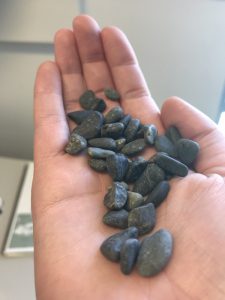 An example of the type of pebbles found on popular rubbing beaches.

In recent years, there has been an increase in video evidence from beach-goers. By comparing these images from recreational observers to those from a photo-identification catalogue of killer whales that has been maintained since 1972, scientists can identify exactly which whales are visiting which beaches. It’s believed these whales are visiting the same beaches year after year, perhaps strengthening family bonds as they do so. Carla Crossman, a research biologist of Ocean Wise’s Coastal Ocean Research Institute, adds that the whales vocalize much more underwater as they approach these beaches, appearing excited.

One of the most popular areas to see this behaviour is in The Robson Bight (Michael Bigg) Ecological Reserve, located in Johnstone Strait. This reserve was created in 1982 to protect the critical habitat of Northern resident killer whales, including the popular rubbing beaches. The organization OrcaLab has set up four live cameras you can access from home and keep an eye out for killer whales utilizing a popular rubbing beach. This behaviour can sometimes be seen in further South as well; a group of Northern residents, known as the A42s, made a splash this winter by rubbing along the pebbly shoreline near Sechelt.

You can learn more about killer whale culture by watching this video by world-renowned killer whale biologist, Dr. Lance Barrett-Lennard.  And remember, whether you’re on the water or the beach this summer, report any whale sightings to the BC Cetacean Sightings Network and help contribute to important conservation-based research!