The Plight of the Vaquita 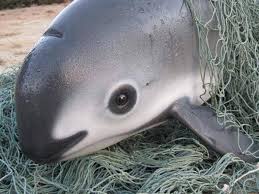 First discovered in 1958, the vaquita (Phocoena sinus) is a small, shy species of porpoise residing solely in Mexico’s Gulf of California. At only 1.5m long, it is the world’s smallest species of cetacean. Though they inhabit only the Northern portion of the gulf, sightings of the vaquita are very hard to come by. These little animals don’t tend to play above the surface of the water like many other dolphin or porpoise species. When they do surface, their dark colouring helps keep them hidden amongst the waves to any potential viewers. Their seclusion has prevented scientists from learning much about their reproductive or social behaviours, and now it may be too late. 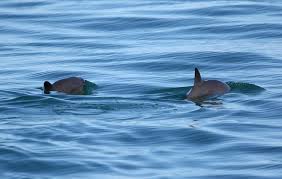 Their small size and elusive behaviour makes the vaquita hard to spot, and they weren’t discovered until 1958. Photo credit: mmc.org

A 1997 survey estimated there were about 600 vaquitas left in the wild; just under 20 years later, there thought to be less than 30. Their decline is attributed to their vulnerability to drowning in gillnets, set illegally by fisherman in the gulf to capture the totoaba fish. This fish is prized in some Asian markets for use of its swim bladder in cosmetic and medicinal practices; a single swim bladder can fetch up to $100,000. Despite a commercial fishing ban of totoabas in 1975 and a gillnet ban in the Gulf of California in 2016, the population continues a steep decline.

In response to the vaquita’s drastic decline, the Mexican government brought together an international group of scientists under the organization called VaquitaCPR.  VaquitaCPR developed a plan to save the vaquita through a captive breeding program, alongside more intensive monitoring of the population.  For other critically endangered populations, captive breeding programs have been successful in the past. The California Condor was brought back from the brink of extinction in the 1980s when the 27 remaining birds were captured and placed in breeding facilities.  As of 2016, the total population is estimated at 446 individuals. 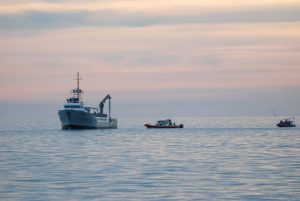 In order to carry out the captive breeding program, VaquitaCPR devised a plan to use four U.S. Navy trained dolphins to help track and eventually capture the vaquita in the murky waters of the Gulf; however, scientists found a series of acoustic monitoring buoys were more than sufficient to find the elusive vaquita.   Vaquita CPR rescue teams deployed nets and captured two vaquitas during field operations.  Both animals were released after veterinarians determined they were not adapting well to their new environment, and sadly, one died shortly after release.

This was a huge blow to the research team. In the wake of this devastating setback, VaquitaCPR scientists unanimously decided to cease the capture portion of the operation.  The team has decided to instead focus on more stringent monitoring of both the vaquitas and totoaba poachers. Unlike the successful rehabilitation of the California Condor, the capture of the vaquita has proven to be far more complicated. It has yet to be determined how scientists can effectively help resuscitate the vaquita population, but until then it is clear that finding a way to effectively end illegal gillnet fishery operations is paramount. Both conservation groups and the Mexican Navy have all increased patrols of the Northern Gulf of California in hopes of discouraging poachers. It is now truly a race against time to save this critically endangered porpoise.