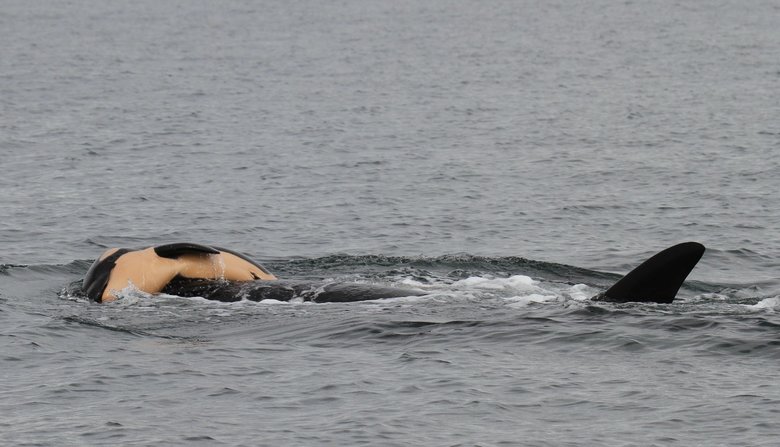 It should have been a cause for celebration.  On July 24, J35 (Tahlequah) – a member of the endangered Southern Resident killer whale population – gave birth to a female calf.  Unfortunately, the calf lived for just thirty minutes. Her body was kept afloat by her grieving mother and other members of her family for over 17 days, making headlines around the world and focusing the spotlight on the plight of our Southern Residents.

In the first moments of birth it is common for whale mothers to push their babies to the surface so that they may take their first breath. It’s thought J35 did just that, likely realizing early on that her calf was not alive but then continuing to carry the body for weeks. Sadly, this is not the first time researchers have documented this apparent grieving behaviour; it was seen in 2010 when a member of the L-pod carried her deceased calf for at least half a day near Friday Harbor, Washington. These heart-wrenching images are indicative of a much greater problem: what is keeping the Southern Resident population from having successful pregnancies and healthy calves?

The Southern Resident population underwent a “baby boom” in 2015, with the welcoming of six new calves. Since then, there have been no more successful births, and only three of the calves are still alive today.  An ongoing study has revealed that pregnancy is quite common for this population, but that 69% of pregnancies are unsuccessful, with many ending in spontaneous abortions (miscarriages) before reaching term1. Researchers believe there may be many contributing factors to the lack of successful births. Primary threats include vessel disturbance, limited availability of preferred prey (i.e. Chinook salmon) and high levels of toxins and contaminants in the water and subsequent food sources2. These threats play a role not only in the birth rate of the Southern Residents but also the health and well-being of adult whales as well. The availability of Chinook salmon is believed to be the greatest factor in Southern Resident health, with most calves being born in the spring or early fall when salmon populations are at their peak1. If the mother has trouble locating food, this will put her life as well as the calf’s life in danger. In years of low prey abundance, hormonal analysis shows an increase in nutritional stress, which can lead to unsuccessful pregnancies1. This evidence, correlated with the return rates of salmon, indicate that in periods of high prey abundance, stress hormone levels are lower in Southern Residents1. 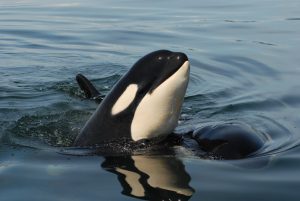 Recently, the Canadian Federal Government implemented a plan to decrease the total allowable catch of Chinook salmon by 25%-35%. Projected growth models have suggested that both increasing prey availability and decreasing vessel noise disturbance by 50% could help reach a 2.3% growth target and assist the Southern Resident killer whale population along the path to recovery2. Some details of the Department of Fisheries and Ocean’s recovery strategy include protecting key foraging areas for orcas, reductions in catch and size limits, and dedicating $9.5 billion to Chinook habitat restoration projects throughout B.C3. By increasing prey availability, studies indicate we should see an increase in the overall health of the Southern Resident killer whale population.

Unfortunately, the plight of J35 and her deceased calf is only part of the story. J50 (Scarlet), one of the calves born during the “baby boom”, appears malnourished and is believed to have lost upwards of 20% of her bodyweight.   The race is now on to save J50.  The Vancouver Aquarium’s head veterinarian and a cross-border team of responders are closely monitoring her condition, and have devised a radical plan to try and save her by administering antibiotics and other medications in the field. 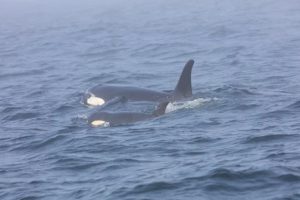 You can help protect our vulnerable Southern Resident killer whales in a number of ways: If you are out on the water, always follow the Be Whale Wise guidelines.  Make sure to give these whales the space they need to communicate and find food, and stay at least 200m away.  Help monitor the population and contribute to research by reporting your sightings to the BC Cetacean Sightings Network.  As well, you can make sure you are choosing sustainable seafood options by purchasing Ocean Wise certified seafood.  You can also symbolically adopt a killer whale through the Wild Killer Whale Adoption Program, which helps to raise funds for killer whale research.