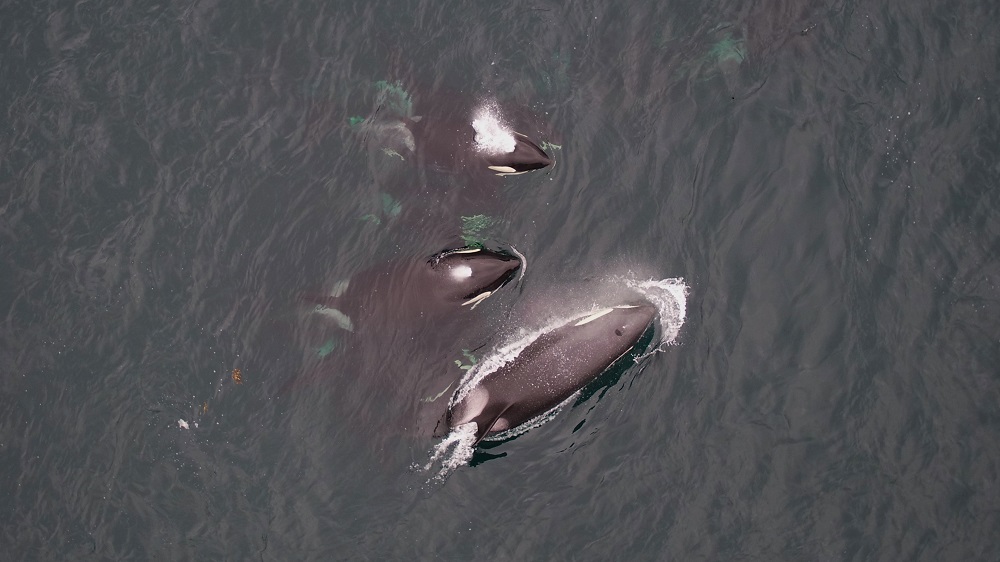 Thanks to our loyal supporters and citizen scientists, the B.C. Cetacean Sightings Network is thriving. Our database now contains over 112,000 sightings of cetaceans and sea turtles along our coast, and these data have already contributed to 16 conservation-based research projects this year!  We’ve reached over 3,300 mariners with our Be Whale Wise outreach campaign, developed the WhaleReport Alert System for large commercial vessels, and opened up a new office in Victoria.

But citizen science is just a small part of what we do here at the Coastal Ocean Institute’s Marine Mammal Research Lab. When we aren’t compiling sightings and conducting training, we are out in the field conducting innovative research on marine mammals, including B.C’s threatened and endangered killer whale populations. 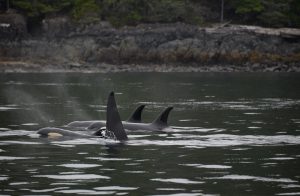 Northern Resident family, the A42s, in Johnstone Strait this summer.

This year marked the fifth season of our photogrammetry project monitoring the health of B.C.’s killer whales. This study began in 2014 as a collaboration between the Coastal Ocean Research Institute, NOAA’s Southwest Fisheries Science Center, and the Sealife Response, Rehabilitation, and Research (SR3).  The team uses a drone to take high-resolution aerial photos of killer whales from above to measure the whales’ lengths and widths.  With these measurements, researchers are able to assess body condition and infer the health status of individuals.  By comparing images of the growing northern resident killer whale population with that of the dwindling southern resident killer whale population, this project is providing insights into why one population is doing so much better than the other. 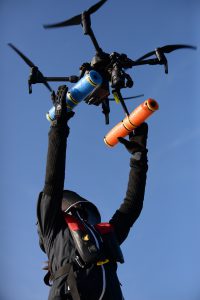 Photographs weren’t the only things we collected this summer. We also collected something much less glamorous, and a lot smellier…killer whale poop!  Working alongside Fisheries and Oceans Canada (DFO) researchers, our team was out on the water collecting fecal samples from both southern and northern residents. This study, led by our MSc student Kaitlin Yehle, will assess the health of resident killer whales by determining concentrations of steroid and thyroid hormones present in their feces as indicators of nutritional and disturbance-related stress. 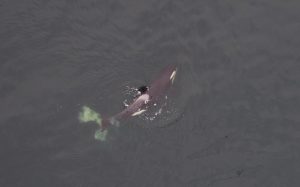 This aerial image of A106 (Nowell) shows a fecal plume that researchers look for using a drone in order to collect fecal samples.

In the Conservation Genetics Lab, our team has been busy investigating killer whale mating systems and identifying prey samples collected in the field. In the upcoming year, we will be working on a new study that examines how gene diversity and human-caused stressors may impact the immune system of southern and northern resident killer whales. By analyzing MHC class-I genes, which are involved in immune function, we can better understand genetic diversity within the two populations and how this may affect their ability to fight disease.

We will spend much of the winter analyzing the photographs and fecal samples collected over the summer, creating a northern resident ID catalogue that includes left, right, and overhead images of each individual, working in the genetics lab, and writing scientific papers.  If you are interested in our scientific publications, please visit the Coastal Ocean Research Institute’s website, https://research.ocean.org/research/cori.  To learn more about how you can support our killer whale research by symbolically adopting a killer whale through our Wild Killer Whale Adoption Program, please visit killerwhale.org.