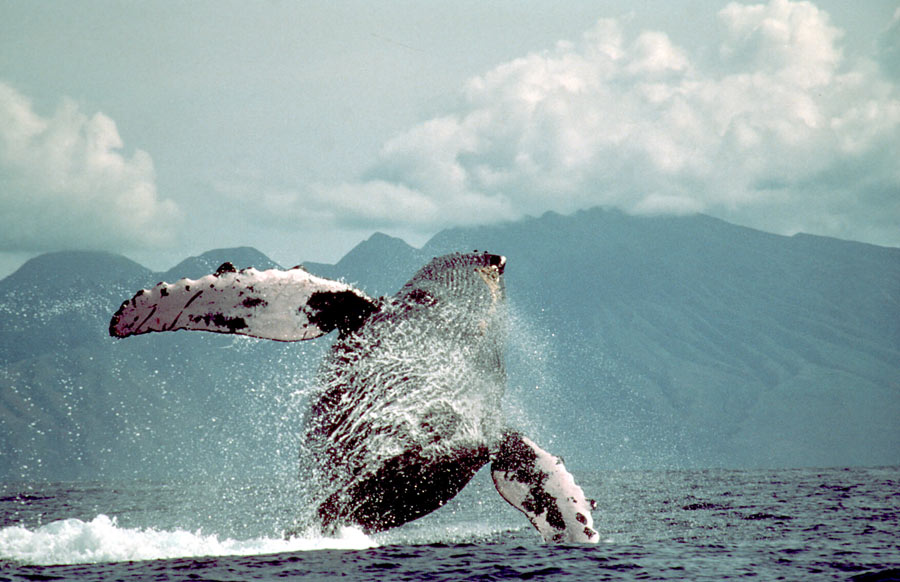 Humpback whales have made a comeback in B.C. waters. A new report by the Marine Education and Research Society (MERS) identified a total of 157 whales in 2018, ranging from upper Straight of Georgia to northern Vancouver Island. This count represents not the total number of humpbacks in the area, but rather the number that could be identified to the individual level using photographs. The undersides of humpback tail flukes have variable amounts of white, creating patterns that are unique to each individual (similar to a human fingerprint). These patterns, along with scars and dorsal fin shape, allow researchers to identify and count individuals. NGOs along the B.C. coast have worked to create area-specific catalogues, including Ocean Wise’s own North Coast Cetacean Research Initiative located in Prince Rupert.

Caption: Lucky is one of the most easily recognizable humpback whales, due to the scarring on her tail left by a killer whale attack while she was a calf.

Included in the MERS count are 86 individuals from the waters near North Eastern Vancouver Island, compared to just 7 documented there in all of 2003. MERS attributes this increase to the end of international whaling in 1966 and to a shift from other areas. Dr. Lance Barrett-Lennard agreed that the increase could be due to redistribution of whales from Alaska or other northern regions such as Haida Gwaii, due to an abundance of prey in B.C. waters. The distribution of humpback whales can be patchy due to their constant movement and migration. “Hot spots” for humpbacks can come and go over the long-term. The B.C. Cetacean Sightings Network (BCCSN) has also seen an increase in humpback whale reports; humpback whales were the most commonly reported species in 2018 with 3,244 sightings, followed by killer whales at 2,076.

With more humpbacks in the water, boaters need to increase their vigilance. Unlike killer whales that often travel in one direction along the surface, humpbacks travel unpredictably and can surface anywhere. Humpbacks also rest and feed along the surface, rendering them susceptible to vessel strike, disturbance, and entanglement. Humpback whales are the most commonly reported cetacean involved in vessel collisions in British Columbia, and research conducted by MERS in partnership with DFO state that approximately 50% of humpbacks in B.C. waters have scarring on their tailstocks resulting from entanglement. To avoid collision with a whale, follow the Be Whale Wise guidelines, and remember, if you see a blow, go slow!  Always be on the lookout for blows or other indicators of whale presence, and increase vigilance in areas of known whale density. If you find an injured, dead, distressed, or entangled whale, or note a violation of the Marine Mammal Regulations, immediately call the DFO Incident Line at 1-800-465-4336.

Here’s how to help B.C’s humpbacks:

Report your sightings to the B.C. Cetacean Sightings Network using our WhaleReport App for iOS and Android devices.  Real time sightings reported via the WhaleReport app are used to inform the shipmasters of large commercial vessels (tugs, freighters, cruise ships, and ferries) of whales in their vicinity so that they can take mitigation measures to avoid collision and disturbance.  Learn more about the WhaleReport Alert System (WRAS) here.

Sponsor a “See a Blow, Go Slow” sign in your coastal community!

Follow the Be Whale Wise Guidelines and Marine Mammal Regulations while out on the water, and if you see a blow, go slow!

Watch this video to learn what to do (and what NOT to do!) if you encounter an entangled humpback.