Eastern Pacific Grey Whales are a large and slow-moving species of baleen whale that are found all along the Western coast of North America. They have one of the longest migrations of any mammal and complete a 16,000km to 20,000km round trip every year from their calving grounds in the warm waters of Mexico to the cool and productive feeding grounds of the Bering and Chukchi Sea in the Arctic. In these waters, Grey whales feed on abundant benthic (on the seafloor) invertebrates such as amphipods and build up fat stores to last them through the year, with occasional feeding along their migration route.

Grey whales were sustainably harvested by indigenous populations for thousands of years, but with the commencement of commercial whaling, the population began to decline rapidly. Commercial whaling targeting Grey whales along the Pacific coast started in 1854 and by the turn of the century, it was no longer economically viable. During this time, 15 whaling stations were opened and 11,300 whales were killed between 1845 and 1874 along the Pacific coast. Hunting in the Mexican lagoons was especially easy for whalers and extremely detrimental to the population since they would often kill pregnant females. In 1937, Grey whales and Right whales were protected by a number of countries with the International Agreement for the Regulation of Whaling; however, commercial whaling of other species in British Columbia continued up to the 1960s. Some studies speculate that only 8,000 – 10,000 whales remained after the extensive exploitation period, however, a more recent estimate (1998) indicates that population numbers have recovered to about 27,000! 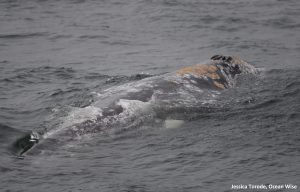 This year, an unusual and concerning number of Grey whales have been found dead all along the Pacific Coast. The official tally as of June 21st, 2019 is at least six whales found in British Columbia, 81 throughout the US coast (Alaska included) and 78 more along the Mexican shores, for a total of 165 whales reported.  In BC waters, the first whale was found near Victoria, the second off the West coast of Vancouver Island, three were found on beaches of Haida Gwaii and the last was found near Boundary Bay on June 4th. Given that only a fraction of cetacean deaths at sea wash up on shore, the real number is likely much higher. While some mortality each year is expected and normal, this phenomenon has been declared an “Unusual Mortality Event” (UME) given the amount of whales stranded so far, and additional resources are being allocated to investigate the causes coast-wide. The last time a Grey whale UME occurred along this coast was in 1999 and 2000, when a total of 651 Grey whales were found stranded along the western coast of North America over the course of the two years. Most deaths were thought to be a consequence of an El Niño event.

Many of the whales found dead this year have been in poor physical condition. They appeared to be starving, with very low fat levels. The water temperature in the Arctic feeding grounds (the Bering Sea and Chukchi Sea off Alaska) have been record high in recent years.. The unusually high water temperatures and a lack of sea ice might have resulted in less overall productivity and therefore less food for the whales.  If the whales did not store enough fat for the year, their reserves to make it north once again may have been depleted.

Mexican researchers found that more than half (50-55%) of the live whales encountered this year showed poor body conditions; a much higher value than normal. Given their unusually low fat levels, hungry and tired Grey whales along the West coast are taking more risks by approaching the coastline near populated areas, probably to look for food or to rest, exposing themselves to greater human-related threats such as boat strikes and entanglement. Nine whales were found dead in the San Francisco Bay area, more than triple the usual numbers at this time of year. 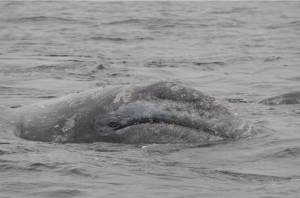 While this year’s UME is concerning, the Pacific Grey whale population has recovered from exploitation and has been growing and thriving over the past few decades. Some researchers believe that another possible cause of these unusual deaths is a natural process of some whales outcompeting others, that the population is simply reaching its carrying capacity, a process that takes time and will most likely result in population numbers fluctuating before stabilizing. In either case, the Arctic is rapidly changing, and Grey whales, like all animals in the polar regions, will soon have to adapt to different environmental conditions and varying food supply.

If you see an injured, stranded, entangled or dead Grey whale, or any other marine mammal, please call the DFO toll-free reporting hotline as soon as possible! It is available 24 hours a day, 7 days a week at 1 800 465 4336.

If you see a live and seemingly healthy Grey whale, or any other marine mammal or sea turtle, we would also love to know! Report your sighting on: