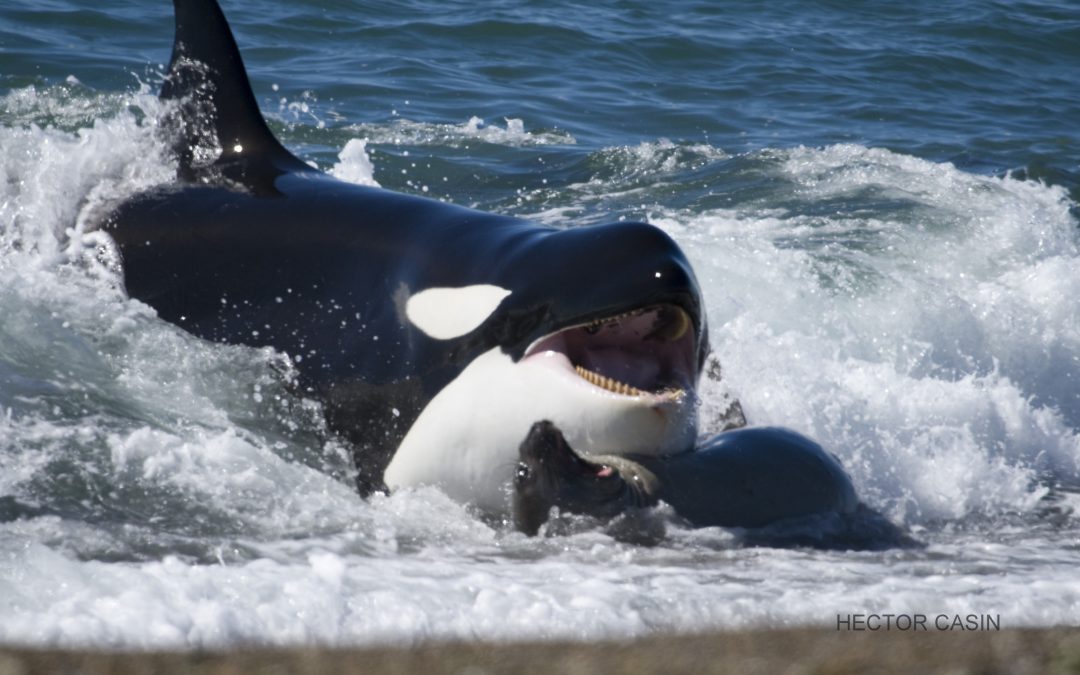 “Maga’s group is by the Mirador!”  Paula’s voice came loud and clear through the hand- held radio. Paula Cicaolo and Jorge Martin are the park rangers at Punta Norte, a wildlife reserve in Peninsula Valdes, Patagonia, a UNESCO World Heritage site of global significance for the conservation of marine mammals. “Maga” is a 40-year-old (give or take a few years) killer whale, the matriarch of a family of 10, most of which are “stranders.” This means that they intentionally launch their enormous bodies onto the beach to capture Southern sea lion pups – and, occasionally, juvenile elephant seals – temporarily stranding themselves, and resorting to energetic body contortions to get themselves back in the water. It’s a risky hunting technique!

These killer whales are intentionally stranding themselves in order to capture sea lion pups.
This specialized foraging strategy is seen only in the populations of killer whales that frequent Punta Norte and the Crozet Islands.

Maria Leoni Gaffet and Gretchen Freund, founders and co-directors of Peninsula Valdes Orca Research (PVOR), have been documenting this behaviour and photo-identifying these whales for the better part of two decades. As a marine mammal research scientist at Ocean Wise, I spent a few weeks at Punta Norte to collaborate on a study of this intentional stranding behaviour. PVOR’s long-term and intimate knowledge of each individual that frequents Punta Norte gives this study enormous value, as we can then understand why and how behaviour differs between particular individuals, what roles different individuals play in the transmission of this behaviour, and how young animals learn and develop this hunting technique over time. In the Crozet Islands, the only other area in the world in which this specialized foraging strategy has been documented for killer whales, not surprisingly, teaching and learning play a big role.

The sun was not out yet when Paula’s excited radio call came through. We had woken up at 6 a.m. to ensure that we would be settled and ready for the killer whales in the attack channel a good three hours before peak high tide. Locals know that the stranders are more likely to hunt during the window before or after peak high tide, when the water covers the reef, and there’s sufficient depth for them to maneuver in the channel.  On this particular day, however, which was my very first day in Punta Norte, the killer whales had arrived a little earlier. We rapidly packed our gear (recorders for voice notes, binoculars, cameras for photo-identification, and PVOR’s photo ID guide) and ran out the door of the little trailer towards the mirador (lookout).  This little hut built on the highest point of the barren landscape, overlooking the shoreline, offers shelter to the rangers that spend many hours each day up there, taking detailed notes on the killer whales, keeping an eye on the sea lion colonies, and ensuring that tourists stay off the protected beaches. 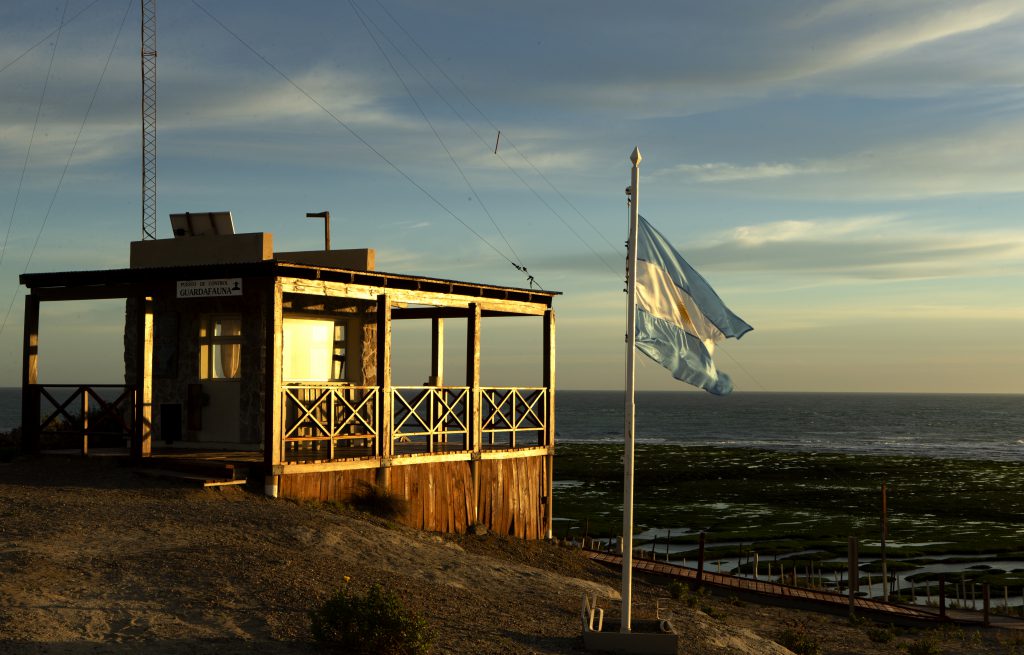 The hut overlooking the shoreline at Punta Norte offers shelter for rangers and gives tourists an opportunity to view killer whales.

I noticed a rugged Argentinean flag fluttering in the wind, and my Argentinean self did a little joyful dance. I was back in my first home, conducting the kind of research that I dreamt of when I left the country and moved to Canada to study biology more than 30 years ago. Life does have a way of coming full circle sometimes.

That was an exciting first day, when I began to observe all the behaviours that would slowly become familiar to me. For this, I relied on the expertise of experienced observers who knew exactly where to look, and when. “Keep your eyes on those pups to the left of the reef,” Hector Cassini, a seasoned ranger and the provincial overseer of natural protected areas, would advice while indicating an area. Sure enough, two seconds later, an attack would occur right on that spot. I also began to learn the names of the whales, which would have been a formidable task without some help. I was amazed at how very familiar these killer whales were to Gretchen and Leoní. The individually distinct saddle patches or eye patches seemed to have become to them as recognizable as human faces.

Maga’s family was the one I got to know most intimately during my stay at Punta Norte. That first day, 17-year old Mica, Maga’s daughter, was patrolling the shoreline with two-year-old Piqui, her youngest, and her five-year-old daughter, Aiken.  As soon as Piqui would venture  into water that was a little bit too shallow for her mom’s comfort, Mica  would position herself quickly between the calf and the beach, guiding it out towards deeper water. Piqui was still too young to be a strander, while Aiken, although not yet a confirmed strander, practiced her stranding technique continuously this season, and had reached the age when some precocious animals become successful stranders. This year, this was the case for Emyr, the five-year-old son of Valen, Maga’s other daughter, who was photographed successfully capturing a sea lion on the beach on April 2nd and thus received his yellow strander badge in the PVOR field guide.

There was the inseparable duo made up of  nine-year-old female, Sheuen (“sun” in the language of the Tehuelche tribe of Southern Argentina), born to Maga, and  eight-year-old Karut (“thunder”), born to Valen (Maga’s daughter), whose sex was not yet known.  They performed the most astounding double stranding on 22 April. The attack was so perfectly synchronized that it seemed planned, both animals breaking the water at exactly the same moment, both capturing two sea lion pups that had been playing side by side. Sheuen and Karut also spent considerable time “practice stranding” this season, when there were no sea lions on the shore, simply to retrieve sea-weed to play with, or to repeatedly deposit an injured pup or a carcass back on the beach, and “re-capture” it, often under the watchful eyes of the young ones in the group. Was this intentional teaching? Trained in the systematic study of behaviour, I have learned to name events in a manner that does not pre-assign intention. So we tallied these events dutifully to see what the data would tell us. These repeated re-captures of the same sea-lion pup really seemed to occur most often in the presence of calves, and did look for all the world like teaching moments.

There was Jaluel (“tiger” in the language of the Tehuelche), the 21 year-old male that often traveled with Maga’s group. I am told Jaluel’s mother is not known. “He has moved between groups since first observed in 2010 and he also travels and hunts alone,” said the PVOR photo-identification guide.  Watching Jaluel’s hunting strategy the day when he appeared alone in the attack channel was nothing short of fascinating. He would patrol the sea lion colony swimming sideways, keeping his dorsal fin parallel to the surface of the water.  Everyone on the peninsula who has spent some time with the killer whales has observed this behaviour. It always coincides with hunting times, and after years of watching this stealthy maneuver, they all agree that Jaluel is intentionally attempting to hide his gigantic dorsal fin from view.  Still, the tip would poke out, and nervous adult sea lions would extend their necks and scan the water, while pups would continue to play, oblivious to the danger.  All traces of Jaluel would suddenly disappear, no dorsal fin tip, no “footprints” on the surface of the water. Nothing. At eye-level, one really would have thought him vanished — but the drone-pilot filming the scene for a documentary would announce, “He’s still there!”  And, sure enough, looking over his shoulder at the drone screen, one would notice Jaluel sitting on the shallow bottom, not moving an inch. And then, suddenly, his colossal body would break the surface inches away from the sea lions. 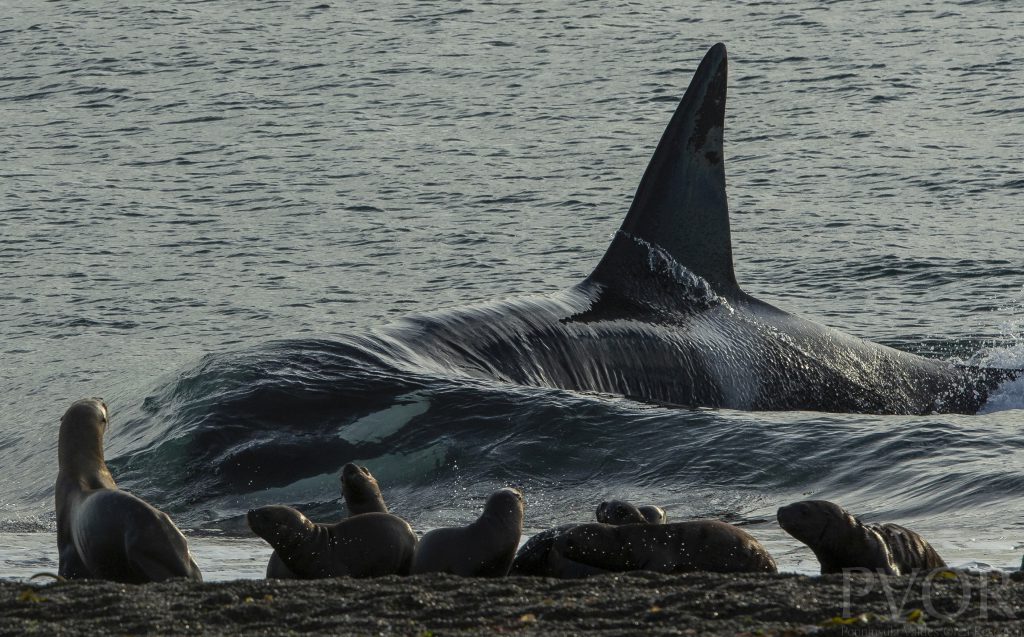 For all his effort, the general consensus was that Jaluel was a poor hunter.  And indeed, only two out of his 10 attacks that day were successful, which explains why when he was with Maga’s group rather than alone, he tended to stay behind, babysitting the calves in the group, and waiting to be fed by the younger, more nimble animals that did most of the hunting and food provisioning.

When the killer whales were not at Punta Norte, we spent some time exploring other beaches along the shoreline of the Valdes Peninsula, since our wildlife research permit authorized us to work from several locations in this protected area. Surprisingly, not once did I see or hear a vessel of any kind. As a biologist who has spent time studying the negative impacts of underwater noise pollution on cetacean communication, I noticed this. Three nautical miles of coastal waters along the entire peninsula are off-limits to boats, intended as a buffer zone for the protection of the main breeding areas of the southern right whale, but also benefitting other marine mammals.  In light of the potentially devastating effects of global warming on our oceans, and on marine Valeria Vergaramammal populations around the world, any protection we can offer is a small mercy.

On one of my last days on the peninsula, we visited the Puerto Pirámides school, Escuela 87, where, as has been the tradition since 2006, the children chose the names of the four youngest killer whale calves.  Jazmin and Maga’s calves, both born in 2016, were named Auka and Arwell, respectively, and Mica and Valen’s calves, both born in 2017, were baptized Piqui and Solei. This makes 22 known killer whales that belong to this extraordinary group that is known for its intentional stranding hunting technique.

I reflect on this now. Only 22 killer whales sustain this culturally transmitted behaviour that appears to be maintained through active teaching and learning. Very little is known about the range and distribution of the killer whales in this area, and about the total population size.  But from a conservation standpoint, losing these animals would mean losing a unique cultural tradition. It is now well-known that the preservation of cultural (socially inherited) knowledge in animal populations results in positive conservation outcomes 1. The privilege I’ve had, not only to observe these individuals so closely, but also to learn from the stories shared by others (researchers, photographers and park rangers alike), has  given me an even deeper appreciation — if that’s possible — for these intelligent animals, their rich social lives, and what it would mean to lose them.