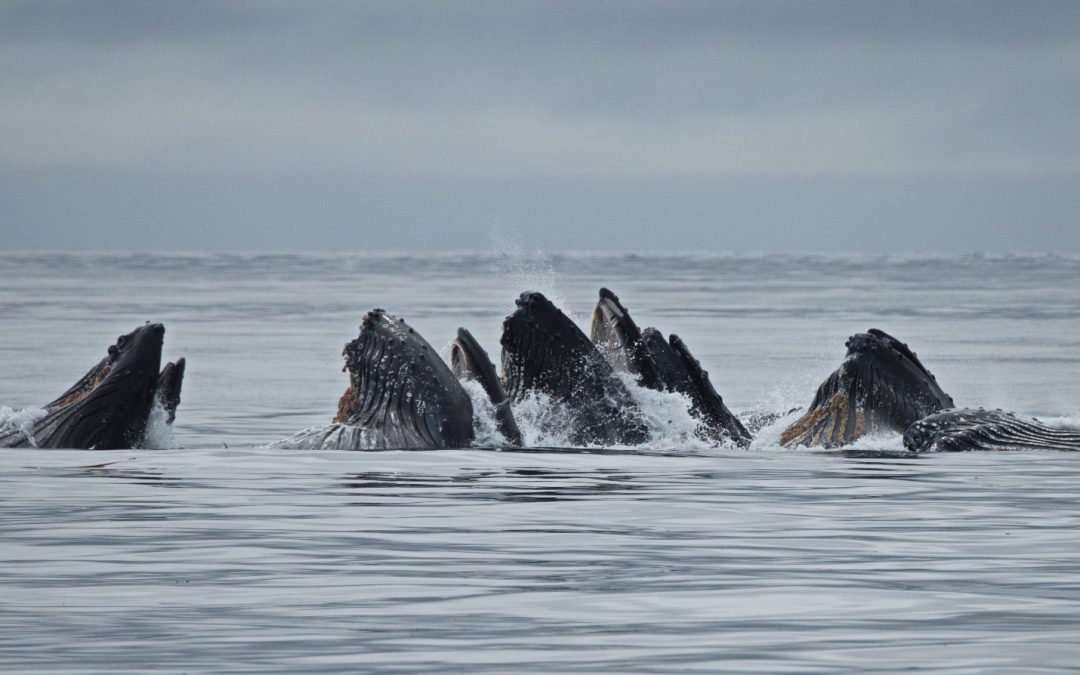 Returning from the pilot season of its drone-based killer whale study along the central coast of British Columbia, Ocean Wise’s Marine Mammal Research team marked the sixth year of its photogrammetry project, documenting the relative health of B.C.’s killer whales.

Established in 2014 as a collaboration between the Coastal Ocean Research Institute (an Ocean Wise initiative), NOAA’s Southwest Fisheries Science Centre, and Sealife Response, Rehabilitation, and Research (SR3), the team uses a drone to take high-resolution overhead images of killer whales. From these photographs, measurements such as body length and width are used to document changes in the physical condition and nutritional status of fish-eating resident killer whales, in relation to fluctuations in salmon abundance. 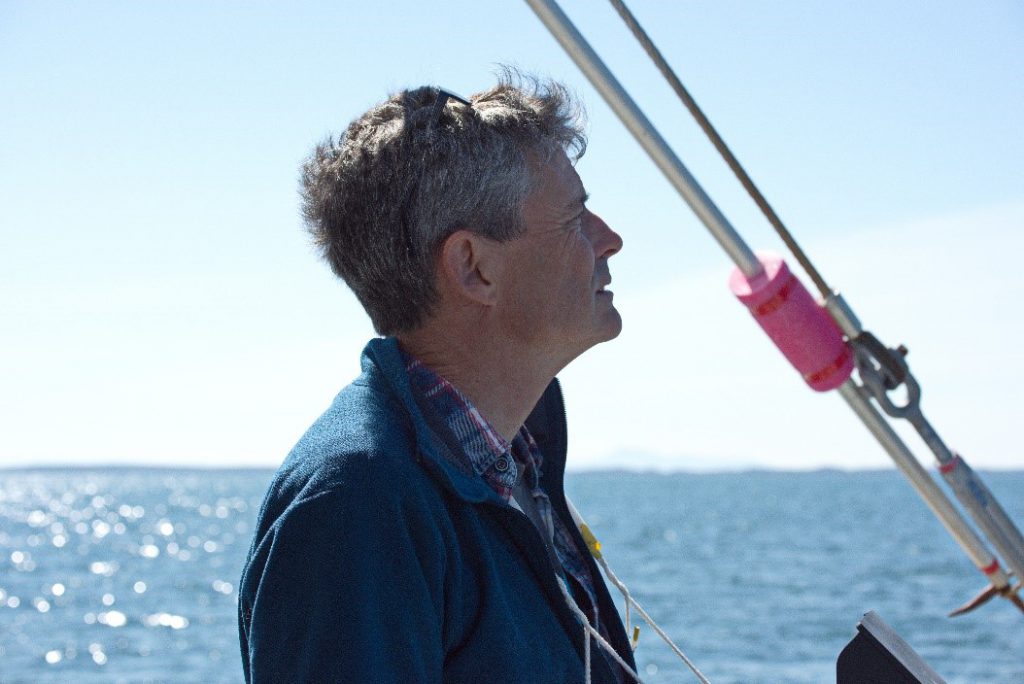 Together, Dr. Lance Barrett-Lennard, the director of the program, and the rest of his photogrammetry team are investigating differences in prey availability that may account for this disparity. This year marked an important step for the team. It has begun to expand its research coverage from its traditional study area, off northeastern Vancouver Island, to the central coast of British Columbia, in hopes of photographing northern resident pods that use more northerly, prey-rich waters. The expansion to the north should allow the team to obtain a more comprehensive understanding of the health of resident killer whales in relation to prey availability. 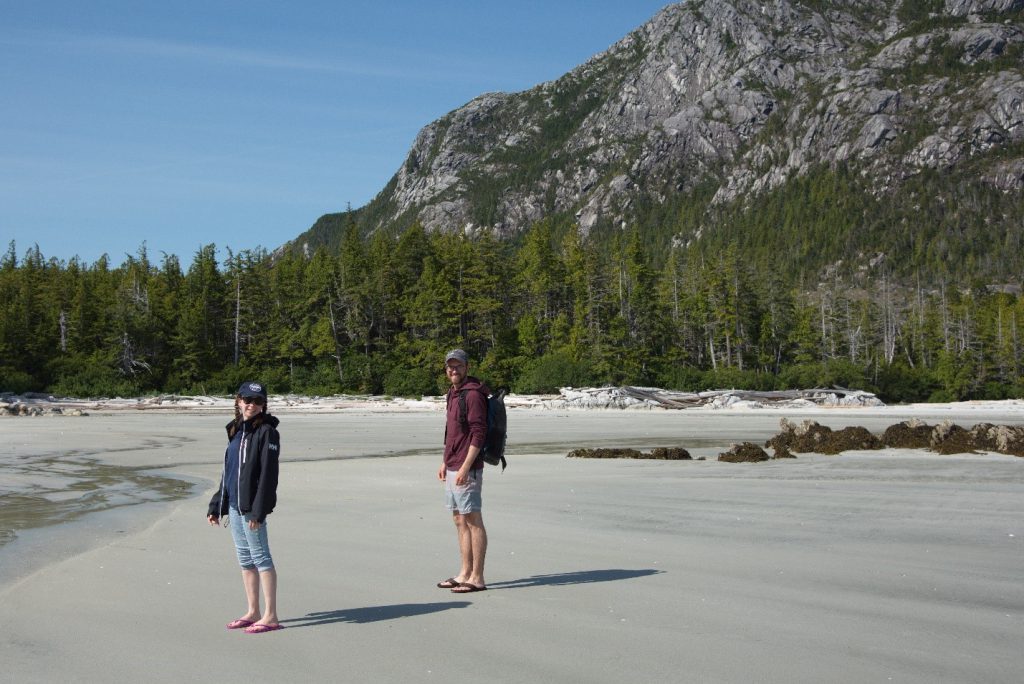 With Lance acting as drone pilot, Brittany Visona as camera operator, and Dylan Smyth as the photo ID technician, the crew set off on June 10th from Port Hardy, B.C., on a three-and-a-half-week, 1400-mile search for northern resident killer whales, ending in Kitimat, B.C. To optimize its search, the team chartered a 15 m research vessel with a zodiac skiff to travel up the coast. Not being restricted to land meant more time at sea looking for whales. Anchoring up most nights, the crew only set foot on dry land three times, to stock up on food and stretch their legs.

After many humpback whale sightings over the first couple of days, the team finally encountered its first northern residents of the year on June 13 – nine whales from C and D pods in Fitz Hugh Sound! Lance and the crew were very excited to see Takush (D9) and Naden (C31), the D12s – Hakai (D12), Whisky (D20), and Nevay (D29), as well as Gypsy (D19), and a few members from the C10s  – Fin (C23), Blackfly (C29), and Petrel (C35) – all in good condition, and all last photographed in August 2018 in Johnstone Strait. The team managed to get two drone flights over the group before the winds picked up and Lance, Brittany and Dylan were forced to retire for the evening. 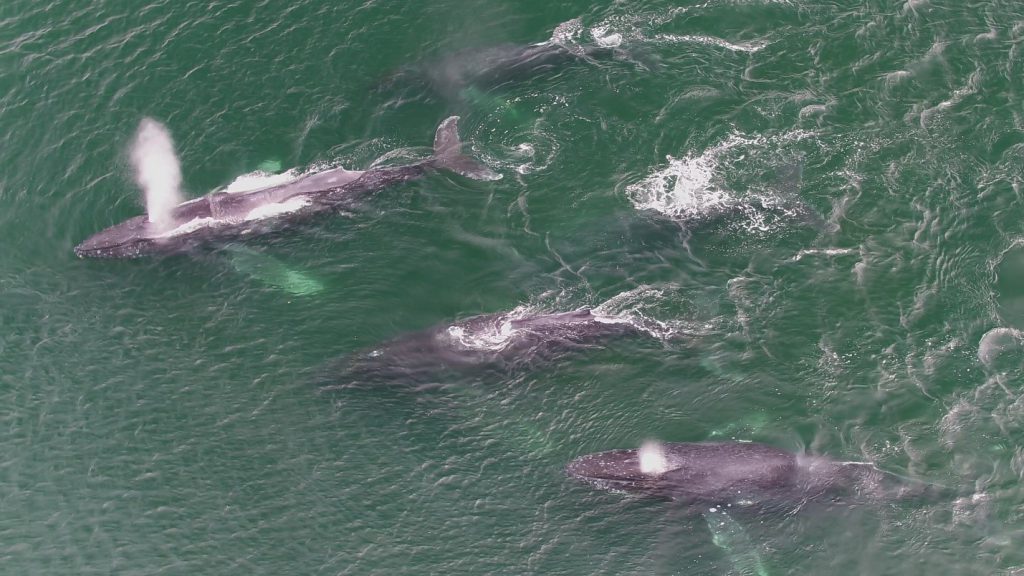 The following few days brought usually-elusive porpoises, Pacific white-sided dolphins, more humpback whales, but no killer whales. Multiple deployments of the hydrophone each day were met with silence as no calls were detected. Just as the team was starting to lose all hope of finding its target species, on June 22nd Dylan spotted the unmistakable tall dorsal fin of a male killer whale, over a mile away, through his binoculars. The team leaped into the zodiac skiff and caught up with the whale, which turned out to be Echo (A55) and the rest of the A34 matriline, who were quickly travelling north a couple of miles off Calvert Island. Large swells restricted the team from flying the drone, but its members were able to collect some ID shots for their catalogue. 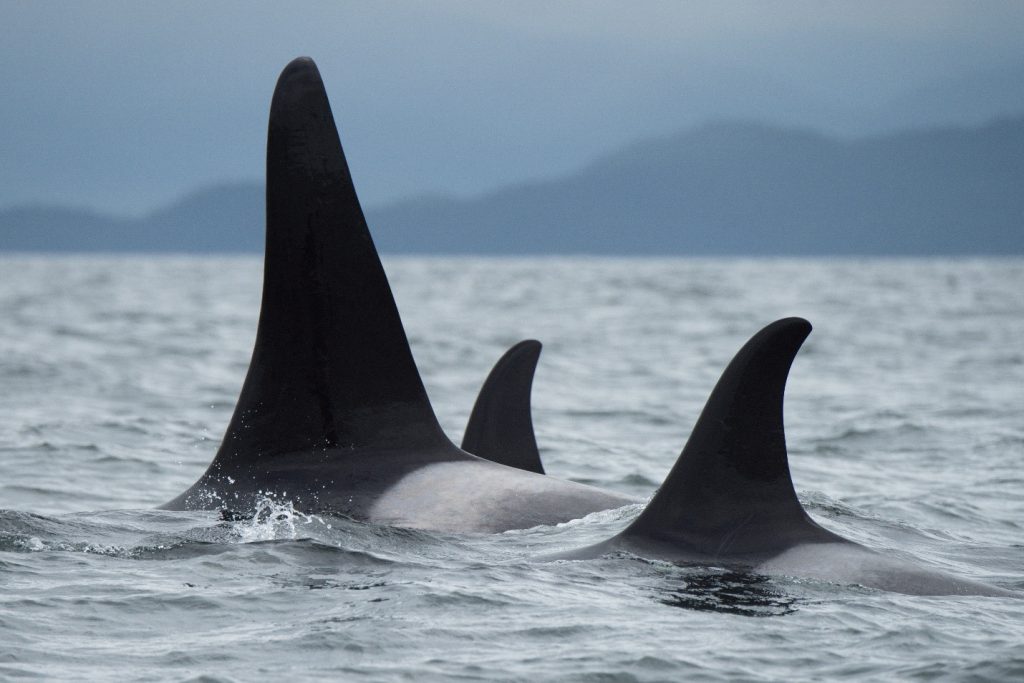 Dorsal fins of members of the A34 matriline group of northern resident killer whales.

Knowing that northern residents were in the area, and itching to collect aerial photos of more killer whales, the team continued its search. Two more days had passed when June 25th brought with it the encounter for which the crew had been hoping. Northern residents from A, G and R clans – individuals from every northern resident clan – were observed in Milbanke Sound. 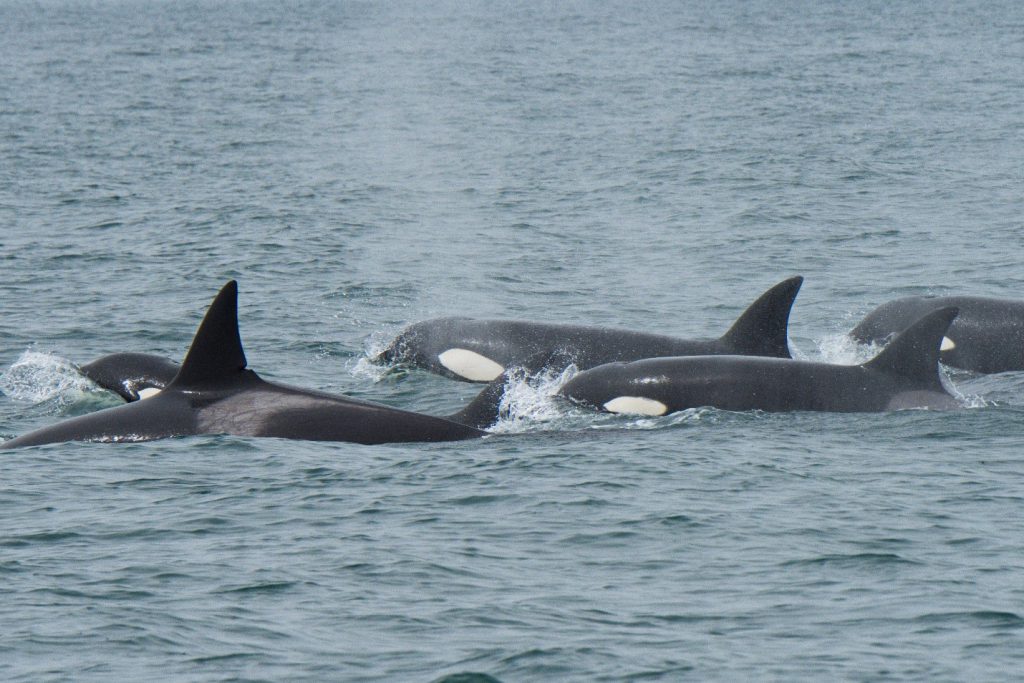 With more than 30 whales present, including members of the A34s, G2s, G8s, G27s, and R18s, the team successfully conducted seven flights and collected more than 1500 photos of the whales. This day marked the turning point of the season for killer whale sightings, as the following weeks brought many new encounters.

June 26 saw the first encounter of Bigg’s (transient) killer whales around Milbanke Sound. First spotted near McInnes Island Lighthouse, searching around the Steller sea lion haul-outs for unsuspecting individuals in the water. The group of 11 whales headed south after an unsuccessful hunting expedition, but not before the team conducted three successful drone flights. The group included members from the T55s, T151s, and T51. 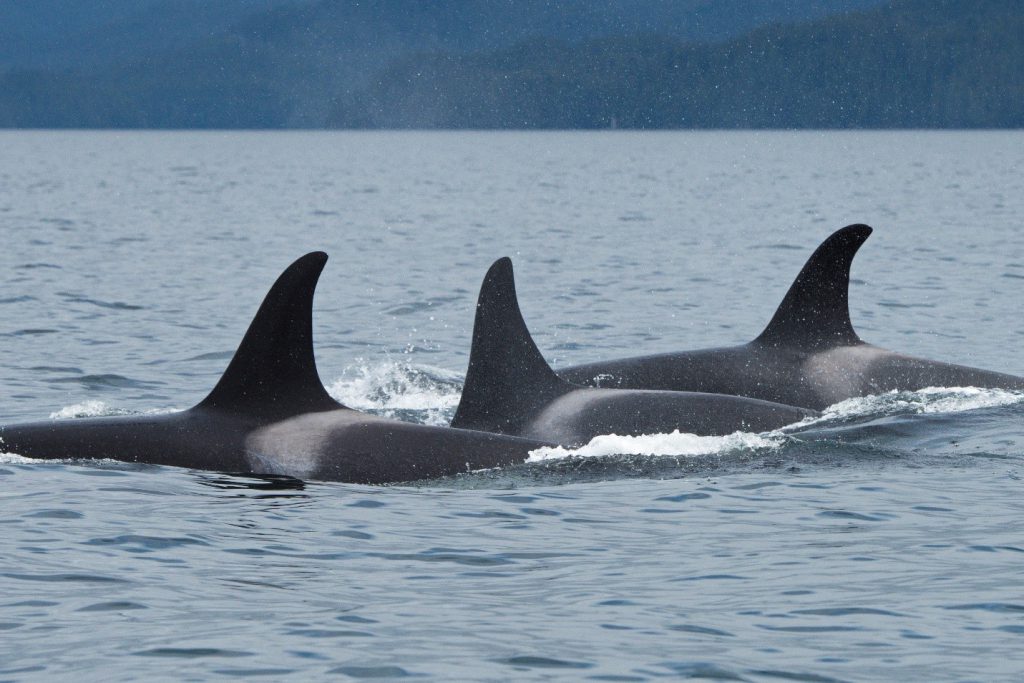 In the midst of all the killer whale sightings, the team had a spectacular day on June 29th with a group of 15 humpback whales bubble net feeding in Hecate Strait. The team was able to conduct several drone flights, collecting photo ID and photogrammetry images, aerial videos of the group bubble net feeding, and some acoustic recording of the group’s feeding calls. Some of the whales present were: BCY0277 (Solar), BCY0013 (Saucer), CSZ0001 (Selma), BCX0711 (Amy), CSY0071, CSY0068 (Xavier), BCY0331 (Misty), BCZ0271 (Mitch) and BCY0036 (Scotty).

After a long, successful day of flying, the team anchored up for the evening at Dewdney Island, and right before seeing a gorgeous sunset to top off the evening, a grey whale surfaced right beside the vessel – making the entire crew jump!

The team celebrated Canada Day, July 1st, with its final field day of the central coast season. Starting as a very foggy morning, the team was “pickling” (dropping the hydrophone and listening for killer whale calls) in search of whales. On its second pickling attempt, music to its members’ ears – killer whale calls were picked up. With thick fog and no reference point as to the source of the whale sounds, Lance pulled out the directional dish for the hydrophone to hone in on where the calls were coming from. After heading off for two miles in the direction he’d identified, the team stopped and dropped the hydrophone back into the water. While Lance and Dylan listened to the hydrophone on the back deck, Brittany went to the front to listen for blows.  After five minutes, she heard them – killer whales straight ahead.

The team frantically pulled up the hydrophones and headed towards the whales, finding Clio (A54), Nowell (A106) and A118, of the A30 matriline, emerging from the fog right beside the research vessel. The team was able to catch up with the rest of the A30 matriline and conducted three flights during a break in the fog. Following a call about more killer whales in the area, the team encountered the G16s, and several members of the G31s, along with the A24s, off Campania Island. The three researchers were able to get in one more flight before the winds picked up. As they were starting to make their journey north towards Kitimat, they spotted their last whale of the season – a fin whale, a first for Brittany and Dylan.

By the end of the season, Lance, Brittany and Dylan had successfully conducted 32 flights and acquired high-quality aerial images of approximately 80 individual whales – more than 60 northern residents, 10 Bigg’s, and five humpback whales. The team is now back in the office and wasting no time in gearing up for its second northern resident field season along northeastern Vancouver Island in August. Stay tuned for updates in September.

If you’re interested in our scientific publications, please visit the Marine Mammal Research Program’s website, https://research.ocean.org/program/marine-mammals. To learn more about how you can support our killer whale research by symbolically adopting a killer whale through our Wild Killer Whale Adoption Program, please visit www.killerwhale.org

This project was funded in part by the SeaWorld and Busch Gardens Conservation Fund and Fisheries and Oceans Canada’s Canada Nature Fund.