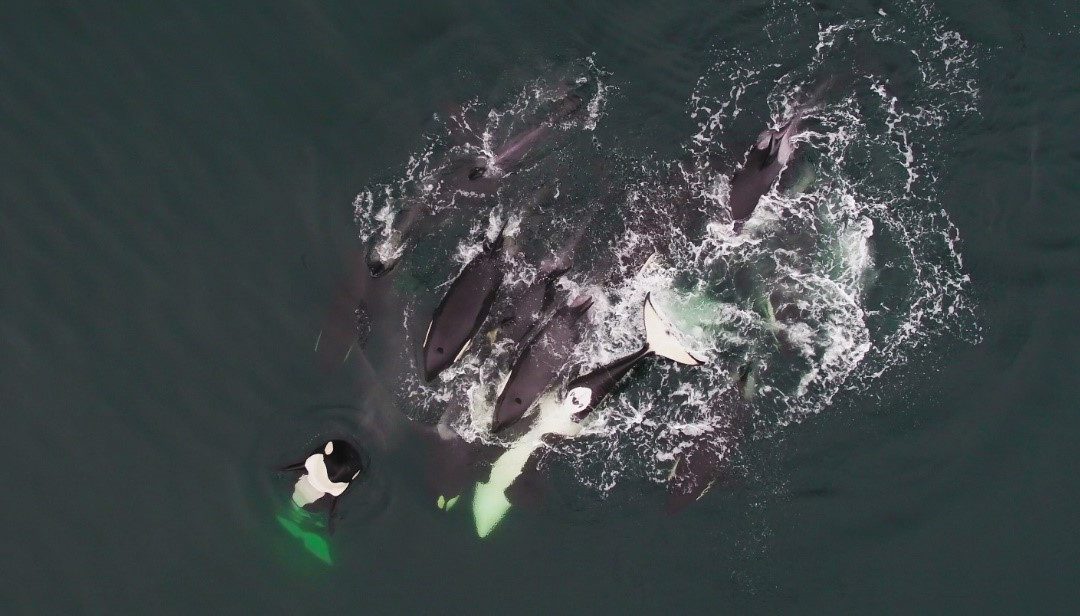 Ocean Wise’s Marine Mammal Research Photogrammetry Team embarked on their second research trip of the year last month – this time off northeast Vancouver Island (if you haven’t already, be sure to check out their central coast work in Part 1). With Dr. Lance Barrett-Lennard as drone pilot, Brittany Visona as camera operator, and Dylan Smyth as vessel operator and photo ID technician, the team departed on August 1 with the goal of taking drone-based aerial photographs of killer whales. The team uses these photographs to monitor body condition, pregnancy status, and overall health of killer whales in B.C. and northern Washington State so as to better inform management measures. After 191 miles of choppy seas and conditions which seemed designed to test the team’s perseverance, the team arrived at their base camp in the village of Alert Bay.

After settling into their new summer home, the team took to the water on August 2 in search for northern resident killer whales. After taking advantage of the calm conditions and testing the drone, the team met up with the A30 matriline – including Blinkhorn (A54) and her youngest calf A118, and Cutter (A86) with her as-yet-unnamed first calf, estimated to have been born in late 2018 or early 2019. Also spotted was the I4 matriline actively chasing salmon in the area.

With three successful flights under their belt after their first day on the water, the team went out bright and early the following day. To their delight their streak continued and they came across Ripple (A43), Fife (A60), Midsummer (A69), Fern (A95), and Eliot (A109) of the A23 matriline, along with the A30s, and in the midst of it all, a group of Dall’s porpoise.  Since fish-eating resident and mammal-eating Bigg’s killer whales avoid each other, part of the reason for this behaviour may be that it keeps the Dall’s are safe from their main predator.

On August 4, despite foggy conditions, the team had a successful day and were met by the A30s which were joined by Surge (A61) and Cordero (A85) of the A25 matriline, the I4s, I27s, I65s, and the I35s. The group seemed to be having a wonderful time socializing, rolling on one another, swimming upside down, spy-hopping, and tail slapping, all whilst travelling in an extremely tight knit group. 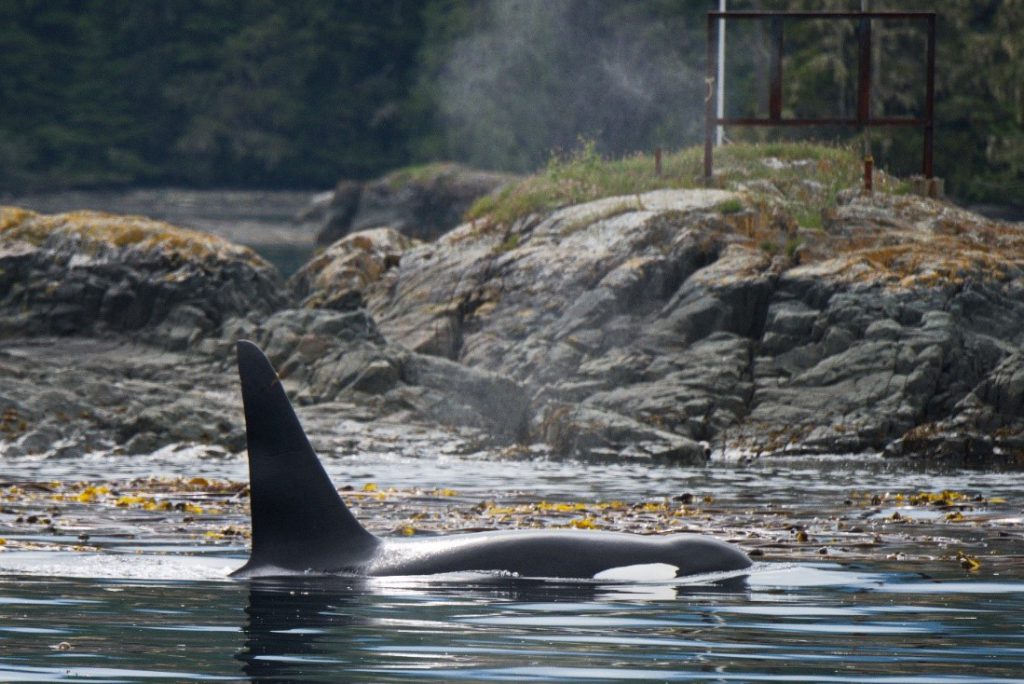 Having already photographed more Bigg’s killer whales for the year than they had in 2018, the team hoped to find more northern residents as they hadn’t photographed all the usual suspects that normally visit Johnstone Strait in August. With two new additions to the team for the day on August 22 – lab coordinator Sarah Wilson and the B.C. Cetacean Sightings Network coordinator, Lauren Dares – the team set out to find the missing residents. Sarah and Lauren must have been a good luck charm as the team encountered the A42 matriline off Numas Island – one of the usual Johnstone Strait groups! Sonora (A42) was travelling with her youngest Ashlar (A114) while Surf (A66), Cameleon (A88), Albion (A103), and Current (A79) and her first calf A119 followed about a mile behind. The team stayed with the family group for several hours, performing 10 drone flights in one day – a record for the season! 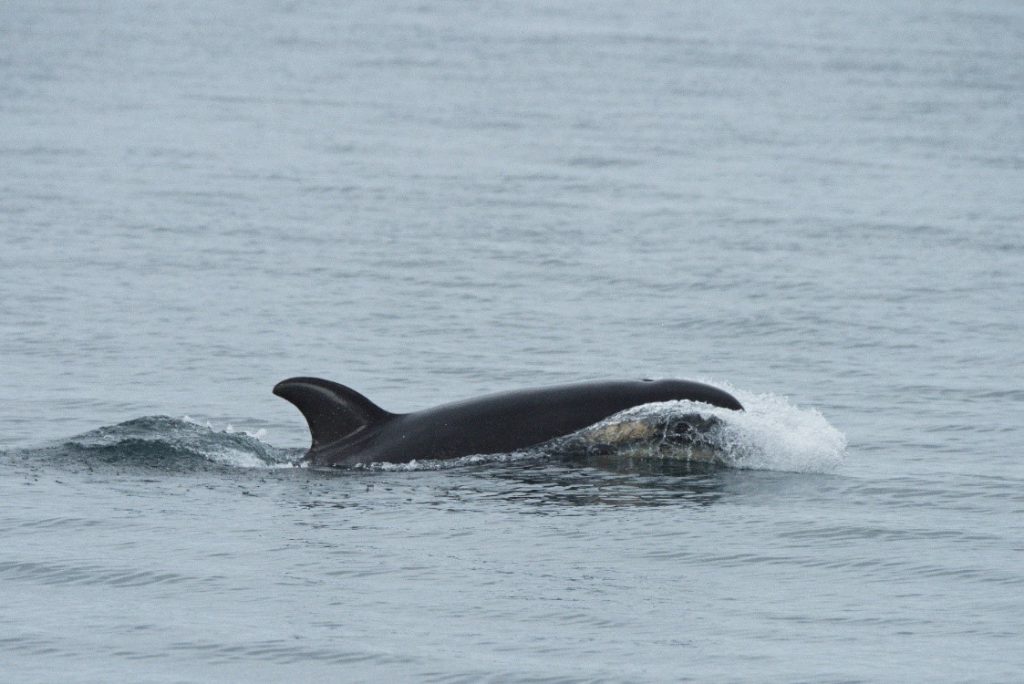 T069A5 was observed chasing and playing with a rhinoceros auklet three miles off northeatern Malcolm Island on August 17.

The team saw the A42s with the A30s and I4s for the following three days and photographed Pedder (T002B) travelling with the T060s and T059 on August 24. They had an interesting encounter the following day after hearing reports of a lone male killer whale in Beaver Cove – home of a logging camp west of Telegraph Cove. T65A2 – a maturing male born in 2004 – was swimming slowly around a barge anchored in the  the cove, apparently searching for seals. He was re-sighted in Johnstone Strait the next day with the largest group of Bigg’s killer whales the team had photographed during the season, including the T007Bs, the T036s, and T049C.

After five weeks, 129 drone flights, and 45 hours flying, the team managed to photograph 113 whales – including 66 northern resident killer whales and 42 Bigg’s killer whales. The team will spend much of the winter analyzing the photographs collected during their two field seasons, updating Ocean Wise’s northern resident ID catalogue, writing scientific papers, and presenting incidental observations from the photogrammetry study at the World Marine Mammal Conference in Barcelona in December.

If you are interested in our scientific publications, please visit the Marine Mammal Research Program’s website, https://research.ocean.org/program/marine-mammals. To learn more about how you can support our killer whale research by symbolically adopting a killer whale through our Wild Killer Whale Adoption Program, please visit www.killerwhale.org