The Secret Life of Harbour Porpoises 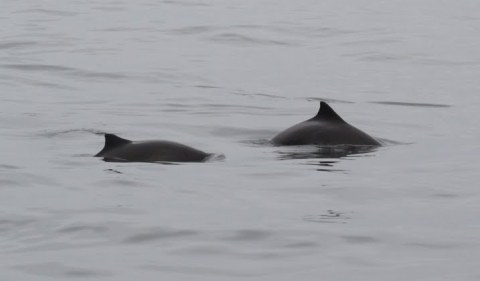 How do you study B.C’s smallest-and most elusive-cetacean?  As our BCCSN Research Assistant discovered, it takes some good weather, a keen eye, and a lot of patience!

Last summer, BCCSN Research Assistant Danielle packed her bags and set up a home base on the remote southern gulf island of Saturna.  With its abundance of marine life and a cliff-side vantage point, Saturna Island offered the ideal location to study B.C.’s smallest and most elusive cetacean: the harbour porpoise (Phocoena phocoena). 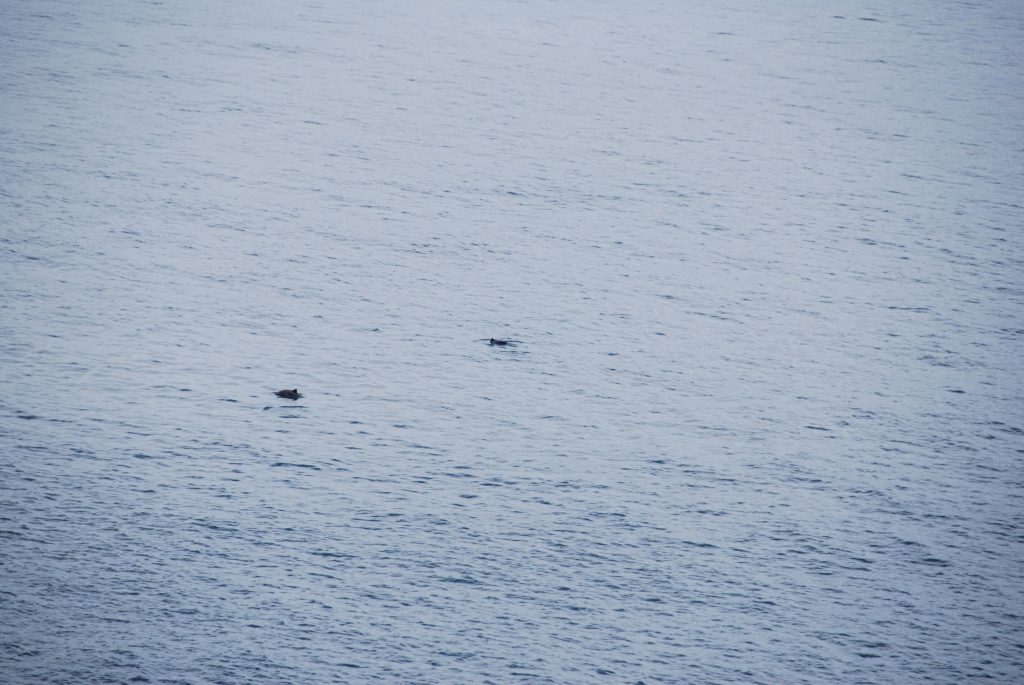 Harbour porpoises seen off of East Point, Saturna Island during a land-based survey.

East Point, located on the southern tip of Saturna Island, is widely known as a popular land-based whale watching location.  Sea lions bask on the nearby reef, harbour seals poke in and out of the shallow bays, and killer whales glide by the shoreline in search of their next meal.  Harbour porpoise are spotted in the area as well, but why they are there-and how often-remains a mystery. 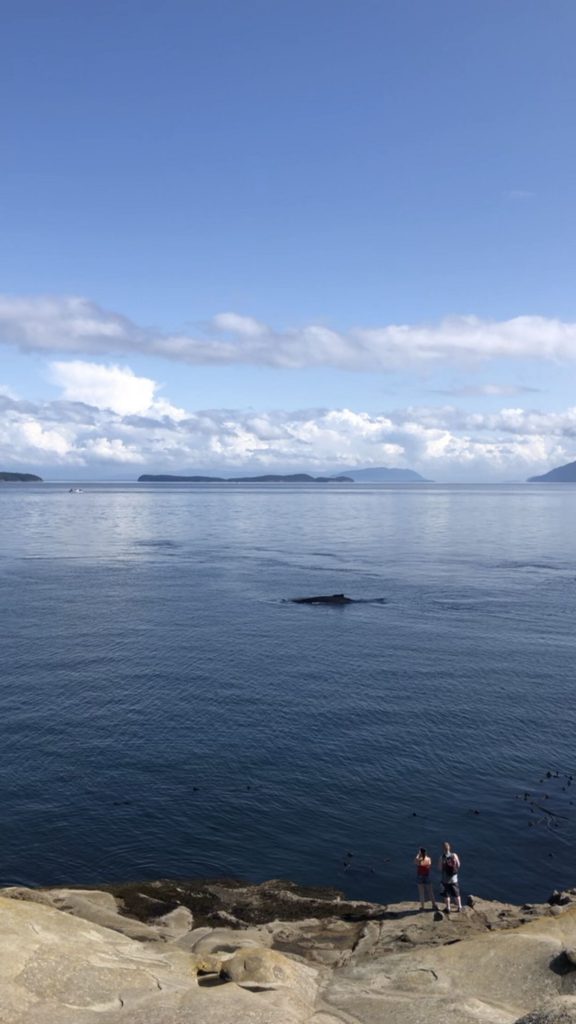 Because they occur predominantly in shallow, coastal waters, harbour porpoise are particularly vulnerable to human activity and are listed as Special Concern under Canada’s Species at Risk Act (SARA).  However, due to their small size and elusive nature, harbour porpoises are hard to spot and are under-reported by BCCSN observers.  This makes it hard to determine their abundance and distribution, and thus establish effective protection measures.  In order to conserve these diminutive animals, we need to understand which areas of the B.C. coast they use most frequently- and how human activities affect behaviours necessary for survival, such as foraging, mating, and nursing young.

Armed with binoculars and a team of trained community volunteers, Danielle set out to answer these questions. The survey crew conducted 18, two-hour surveys off the cliffs at East Point from July to September.  They recorded harbour porpoise presence and  behavior whether or not calves were present, the distance of the animals offshore, and vessel activity in the study area.  The crew viewed groups of harbour porpoise foraging, traveling, and-milling in the area.  Danielle even witnessed a male harbour porpoise lunging on a female, a rare boisterous mating behaviour of this otherwise low-key species. Mother-calf pairs were also seen on numerous occasions. 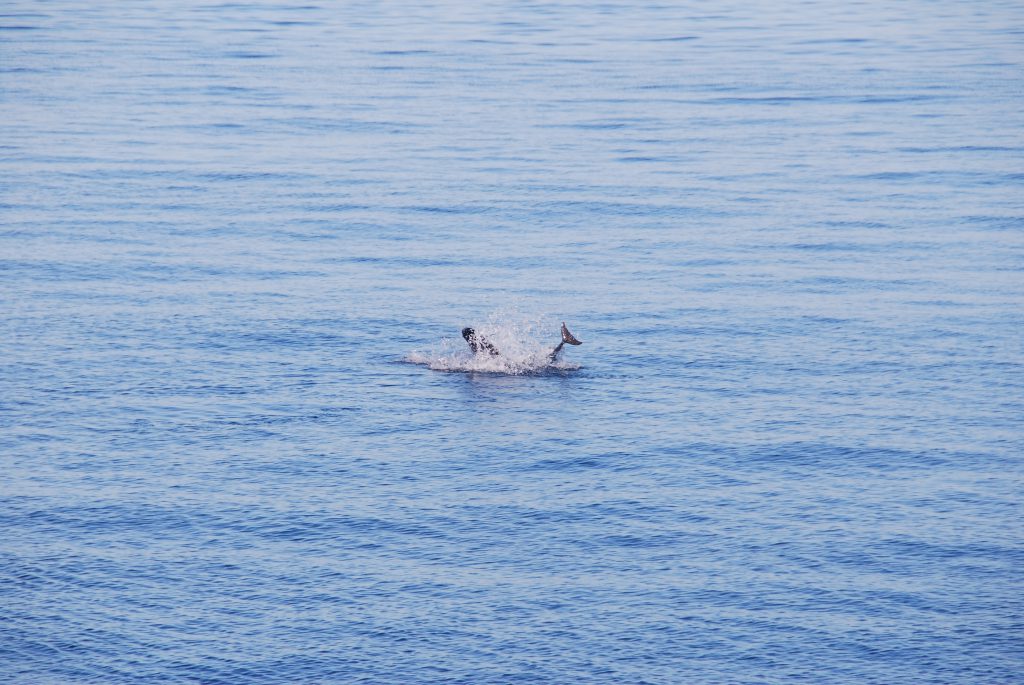 Since harbour porpoise surveys can only be conducted on calm, clear days (otherwise the porpoises are too hard to detect!), there were plenty of opportunities to watch other marine mammals.  On one occasion, a group of seven Bigg’s (mammal-eating) killer whales came through Boundary Pass, tail slapping and spy hopping as they swam around Boiling Reef to investigate a group of nervous harbour seals.  On another day, two humpbacks surfaced within 20 metres of the shore! 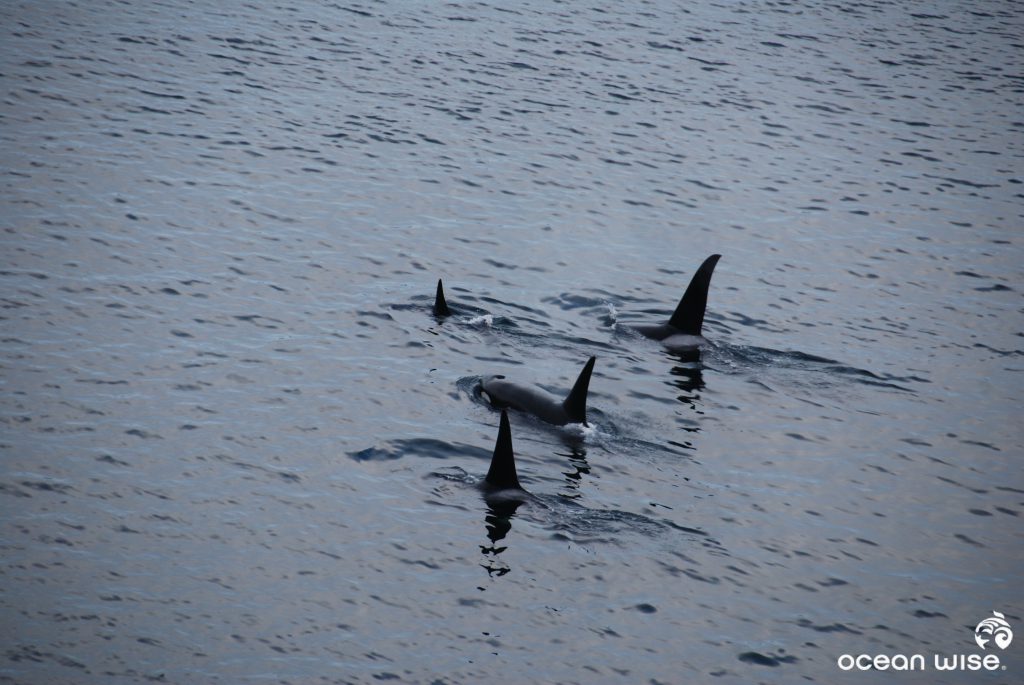 A family of Bigg’s (transient) killer whales, known as the T101s, swimming past East Point.

Now that field season is over, we are back in the lab analyzing our survey data and preparing for the next summer of surveys.  The preliminary results will increase understanding of harbour porpoise habitat use in the waters around Saturna Island and how vessel presence may affect their behaviour -information that will help to ensure harbour porpoise populations are effectively protected in British Columbia.

This project was conducted in collaboration with the Saturna Island Marine Research and Education Society (SIMRES), with funding from the the Habitat Stewardship Program.

Thank you you to SIMRES, the Saturna Heritage Centre, our dedicated volunteers, and the generous residents of Saturna Island for their support with this project!

Want to get involved in citizen science and help to protect harbour porpoises?  Report your sightings to the BCCSN via the WhaleReport app, available for Android and iPhones.  For more information on how your reports are used for conservation-based research, click here.