Life isn’t smooth sailing for a whale – it’s our job to make it a little easier: A look back on our efforts from 2019 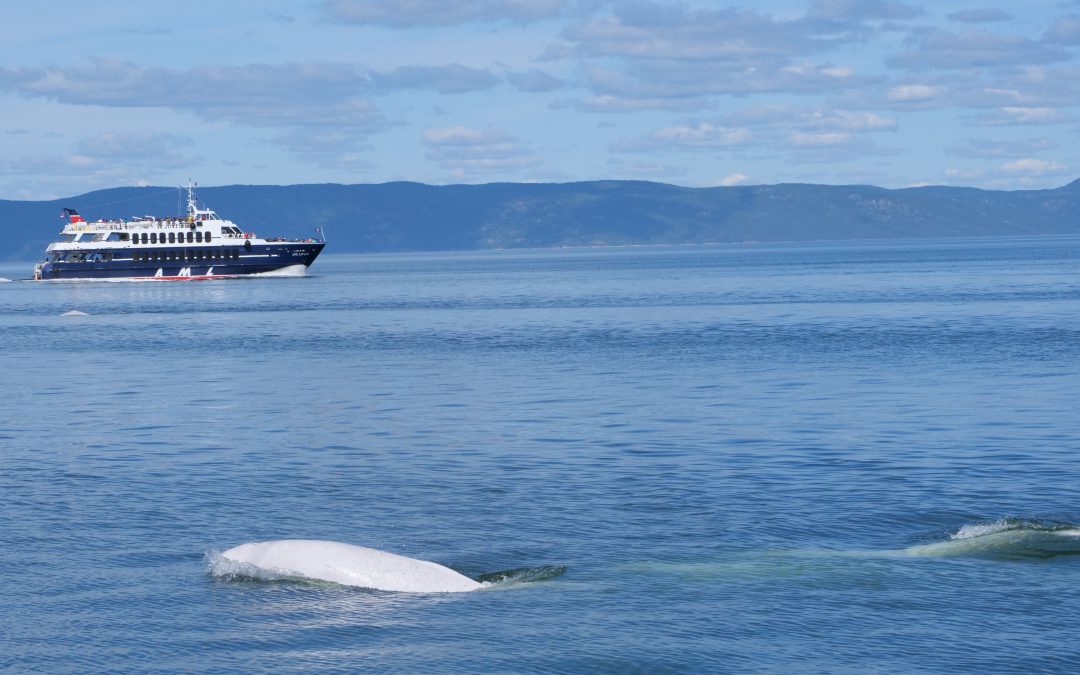 It’s tough being a whale these days. Your average killer whale might not have to worry about increasing fuel prices, nor does a humpback whale stress about getting a work assignment done on time. But, imagine inadvertently ending up in a shipping lane – essentially a highway for vessels without the painted yellow lines – or getting caught up in fishing line without any arms or tools to free yourself. Imagine the deafening sound of a vessel from above, blasting your ear drums and drowning out your efforts at communicating with your family in a world where your vision is usually not the most effective of your senses. On top of all of that, imagine having to compete with commercial fisheries for ever increasingly scarce food – and all of this on a daily basis! If you think this might be an overwhelmingly difficult way to live, you aren’t alone. We in the Marine Mammal Conservation Research program here at Ocean Wise, spent the previous year trying to make the lives of whales in Canada a little easier. Our work focuses on examining the impacts of vessel noise and disturbance on whales, finding ways to reduce said noise and disturbance, and inferring the health of killer whales using a method known as photogrammetry.

Acoustic communication and the impacts of noise pollution on St. Lawrence Belugas

For the past few years, our very own beluga experts, Dr. Valeria Vergara and Marie-Ana Mikus, have been studying beluga communication in relation to underwater noise in collaboration with the Quebec-based Group for Research and Education on Marine Mammals). This past year, they completed an important aspect of this study, which focuses on mother-calf pairs. In their dark, underwater world, belugas must rely on sound, more specifically, on a system of contact calls (vocal signatures), to keep track of one another. If this system is compromised, the energy demands on the animals can be taxing at best. At worst, there is potential for the calf to become separated from its mother, resulting in potentially dire consequences for the baby beluga. The study showed newborn calves produce much weaker contact calls than adults, translating into smaller communication ranges. Newborn beluga calls may only reach a mere one-tenth of the range as adult contact calls. These small communication ranges make them particularly sensitive to increases in underwater noise, which can reduce a newborn’s call to only tens of meters – imagine a baby trying to call its mother in a busy café compared to an empty playground. This means, that if involuntary mother-calf separations occur in the face of some disturbance, noise may interfere with the pair successfully reuniting. A beluga newborn would hear its mother but may be too young to orient itself and find her. Combine this with the drastically reduced communication range of the newborns calls and mom might simply not be able to hear the calf. 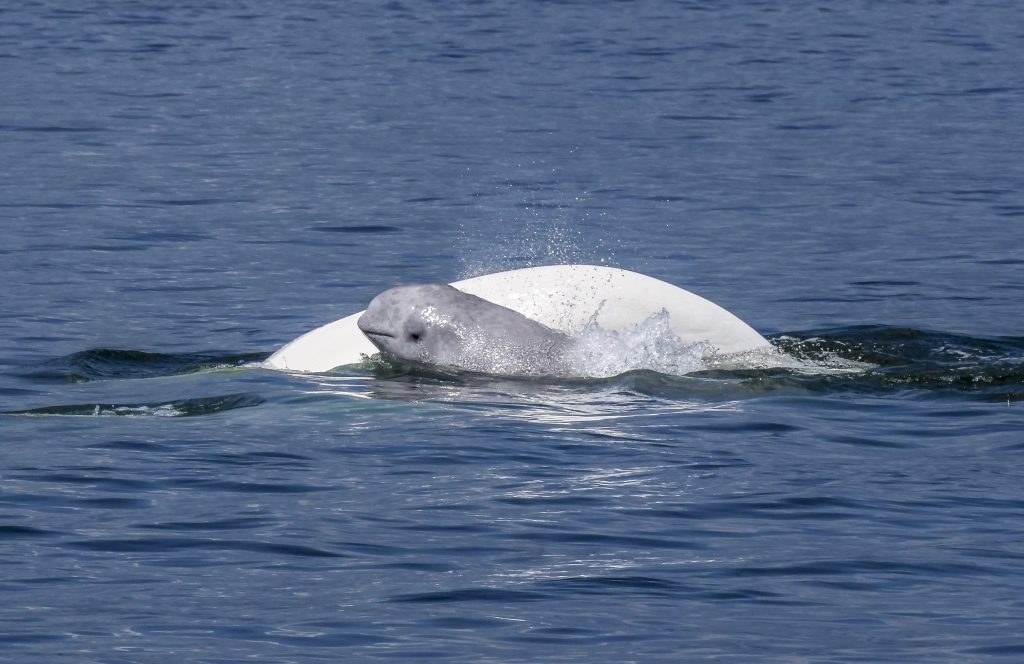 Over the summer, the team switched gears concentrating their efforts on a study to validate preliminary evidence that beluga contact-calls may be individually distinct and used as “acoustic name tags” to identify themselves within the herd. They headed to the St. Lawrence River Estuary in Quebec, where they collaborated with a team from Fisheries and Oceans Canada (DFO) who were deploying non-invasive Digital Recording Acoustic Tags (DTAGs) on identified beluga whales. The goal of these DTAG deployments is to pair the contact-calls produced by individuals carrying the tags, with photo-IDs of those same individuals. Put simply, this project aims to determine whether passive acoustic monitoring could be used to track habitat use and ranging patterns of identified beluga whales, ultimately aiding in conservation and management efforts.

Over on the west coast, The B.C. Cetacean Sightings Network (BCCSN), has been busy trying to mitigate the impacts of vessel noise and disturbance on whales through citizen science initiatives and collaboration with marine stakeholders. In October 2018, the BCCSN launched the WhaleReport Alert System (WRAS) – a tool developed for commercial mariners that alerts them to the presence of whales in their vicinity. Receiving alerts from the WRAS enables marine professionals to undertake adaptive mitigation measures, such as slowing down or diverting course, in order to reduce the risk of collision and disturbance. The BCCSN and its partners have spent the past year improving the functionality and expanding the reach of the WRAS, increasing its effectiveness and making those marine highways a safer place for whales. This included opening an office in Victoria, B.C. – the Southern Vancouver Island Cetacean Research Initiative (SVICRI).  The SVICRI team are focused on conducting outreach, engaging potential partners, and organizing various community activities to increase awareness of the WRAS and encourage people to report their whale and dolphin sightings to the network.

The BCCSN published its second print resource for mariners this year (the first being the well-received Mariners Guide to Whales, Dolphins and Porpoises of Western Canada published in 2016). Following a Whale Entanglement Workshop organized by the BCCSN in 2018, the team published an Entanglement Guide to inform mariners and coastal citizens of what to do and who to call should they encounter an entangled cetacean.

The BCCSN team also continued to expand The Whale Trail – a network of sites along the coast from California to B.C. where whales, dolphins, and other marine mammals can be viewed from shore. British Columbia is now home to over 39 designated Whale Trail sites, marked by interpretive panels or trail markers. Every Whale Trail panel highlights local information and marine mammal species that can be spotted in the area. Additionally, the Whale Trail BC contributes to conservation-based research by encouraging people to report their sightings to the BCCSN, thereby supporting the WRAS as well as helping to track populations of marine mammals in B.C. 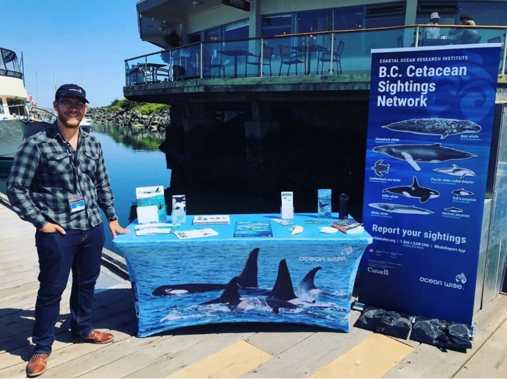 Inferring the Health of Killer Whales

British Columbia is home to two distinct populations of fish-eating, resident killer whales – the northern residents, numbering around 300 individuals, and the southern residents, numbering at a mere 73 individuals. With such a vast difference in population size, one must ask, why is one population seemingly doing so much better than the other when, to the untrained eye, they appear to face the same difficulties in life? This is what Dr. Lance Barrett-Lennard and his team are trying to figure out through their drone-based study monitoring the body condition, pregnancy rates, and calving success of B.C.’s killer whale populations. For the sixth consecutive year, the team headed to the coastal waters of B.C. in search for whales to photograph with the help of Auklet, their trusty drone.

The team spent most of June breaking new ground in the northerly waters between Port Hardy and Kitimat, putting over 1400 miles on the boat in a search for northern residents. In August, they revisited their usual photogrammetry study area off northeastern Vancouver Island. Photographing the whales in June and again in August makes it possible to monitor seasonal body condition changes over the course of several months – ultimately providing a more comprehensive understanding of the health of the population in relation to prey availability. 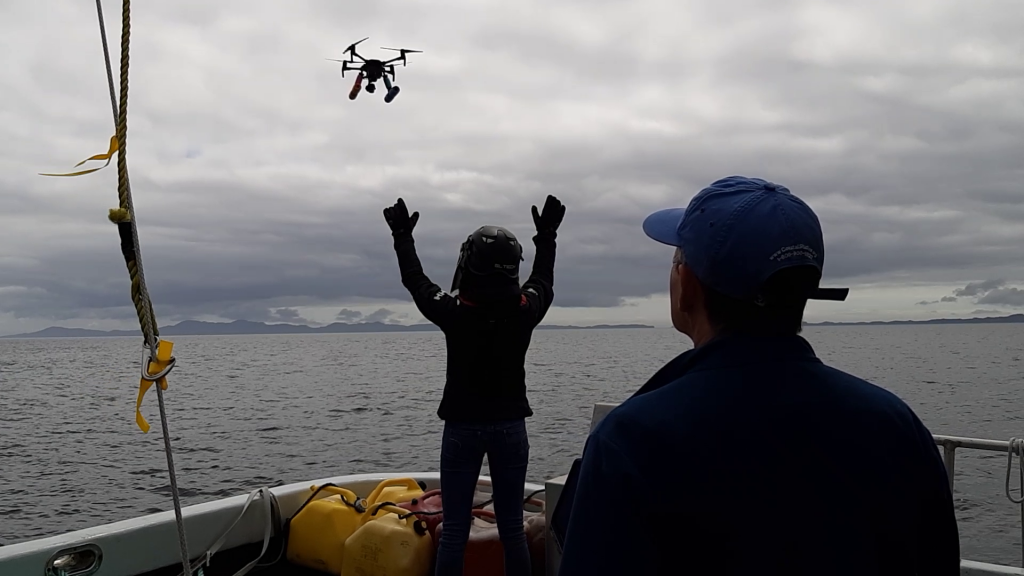 Photographs weren’t the only thing we collected 2019 – we also collected their poop! As with humans, killer whale feces contain useful clues to health, so MSc student, Kaitlin Yehle and her assistant Alex Forman  spent June and August scooping killer whale fecal samples.  The pair worked in close collaboration with Fisheries and Oceans Canada researchers, and collected samples from both  northern and southern residents. The “poop crew” returned with a stuffed freezer as they managed to collect 26 southern resident, and 31 northern resident fecal samples. Back in the Conservation Genetics Lab, we are analyzing DNA from the samples to identify the individual whale from which the fecal matter  came. By combining the body condition information collected from our photogrammetry studies and pairing it with stress hormone level data, we can provide greater clarity on the effect of environmental stressors on resident killer whales and shed light on why southern residents are slower-growing, and in poorer condition than their northern counterparts. This work on inferring the health of killer whales aims to inform policy regarding fisheries management and make searching for food that little bit easier for the whales. 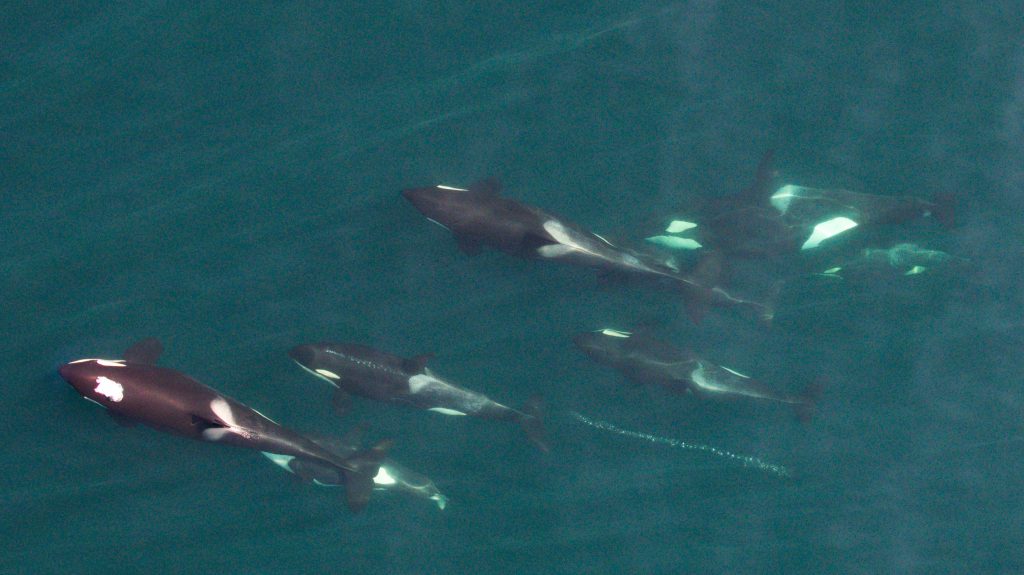 Humpback whales have made a remarkable recovery in B.C. waters since the days of commercial whaling. However, the north Pacific population is still listed as a special concern in Canada; facing threats from vessel strikes, entanglement, and toxic spills. Humpback whales around the world are generally thought to migrate to warmer waters to breed during winter months, so it has been interesting to see aggregations of humpbacks remain in Chatham Sound throughout the last few winters. Our North Coast Cetacean Research Initiative (NCCRI) team, based in Prince Rupert, has been focusing on collecting photo-id images of these humpback whales to determine the use and importance of the area, whether the over-winterers are males, females or both, and whether the same individuals are present every winter.

Up to this point, the NCCRI team have recorded over 220 unique individuals. Just this winter alone, we identified 60 individual humpback whales of which 20 had not been previously identified. Unlike killer whales, humpbacks are typically identified by variable scars and pigmentation patterns on undersides of their flukes. Being able to consistently identify returning humpbacks provides much needed insight into how Chatham Sound is used year after year. Scars can be added or change in appearance over time, and when an individual hasn’t been around for some time, has grown up, or has been in an accident, it can be challenging to identify. Can you see the similarities between these photos of the same individual, taken a year apart?

The Sound is a very busy area for tourists and sports fishermen, as well as B.C. ferry and shipping traffic. All this vessel traffic could have major implications on the daily, monthly and even annual behavior of the humpbacks. Results and data analysis are currently underway for this project and our team hopes that their findings will help influence policies related to shipping vessels and fisheries in the area, thereby reducing threats to humpbacks. After such an incredible recovery in the last 50 years, it’s important that we continue to monitor humpback populations and do our part to maintain the environmental conditions necessary to support these incredible giants.

Wondering what you can do to make the lives of whales easier? Report your sightings using the WhaleReport app and help researchers learn more about the distribution and habitat use of whales, dolphins, porpoises, and sea turtles in B.C. waters.

When boating, paddling, and viewing marine mammals, follow the Be Whale Wise Marine Wildlife Laws and Guidelines to reduce your impact on these animals.

You can also help support conservation-oriented research on B.C.’s killer whales by adopting a killer whale through our Wild Killer Whale Adoption Program.

Ocean Wise’s marine mammal research is funded in part by: