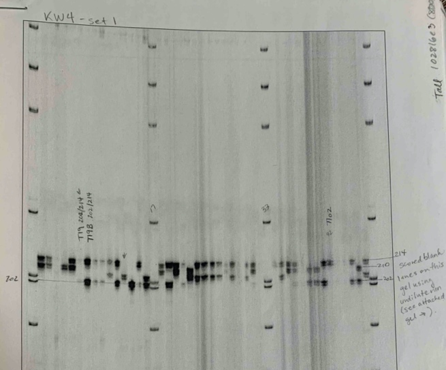 Conservation research efforts at Ocean Wise seek to improve our understanding of many issues faced by marine life. To do this, we use a wide range of research tools, including DNA collection and analysis. DNA research technology has developed dramatically over the years. We are now able to obtain more information faster, and at a significantly lower cost than even five years ago.  So how do researchers at Ocean Wise use DNA to inform conservation efforts?

DNA can be used to determine family lineage in killer whales

There are many ways that DNA can help us learn about threatened populations, often providing information that would not be available by any other method. For example, it is often difficult to figure out the paternity of a killer whale because males don’t stick around with their mates to help raise a calf. Generally, males return to their maternal pod and the calf’s family tree has a missing piece. We can use DNA to fill in those blanks to learn more about the mating patterns and population structures of each pod. This is because, the DNA from a single individual (of any species) is unique, much like a fingerprint. This is why “DNA fingerprinting” of crime scene samples is already a tool used by forensic scientists as a form of evidence in criminal cases. Individual killer whales also have a unique DNA fingerprint that we can take advantage of – although not for criminal cases!

Dr. Lance Barrett-Lennard, the director of the Marine Mammal Conservation Research Program at Ocean Wise, was a pioneer in this type of analysis. His PhD work at the University of British Columbia looked at the population structure and mating patterns of killer whales1.  To do this he focused on microsatellites, little stretches of DNA that vary in length quite a bit between individuals (the vast majority of the sequence of DNA is the same between members of the same species). The unique length of these microsatellite regions is passed down from generation to generation along with the rest of their DNA. By looking at these regions, we can track the family lineage of each whale.

To do this, we need to analyze the lengths of DNA in several known microsatellite locations. We first make multiple copies of each short stretch of DNA using a technique called polymerase chain reaction, or PCR (the same technique that is used to test for the presence of genetic material from viruses such as the novel coronavirus). After more than 1 billion copies of the DNA are produced, they can be pooled together and visualized so that the size can be measured. The unique size pattern of the DNA from several microsatellite locations makes up the genetic fingerprint of each killer whale. This technique works very well, but the amount of time needed to carry out this analysis for a pod of killer whales is on the order of several weeks to months. 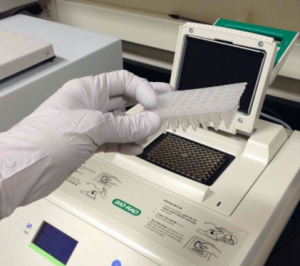 A PCR machine about to run some killer whale PCR samples
. 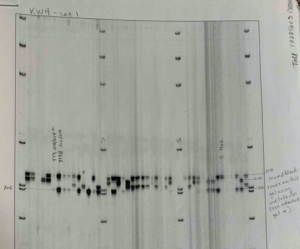 Image of a DNA microsatellite fragments stained on a gel

How can we use DNA sequencing for conservation research?

Another way to get the genetic fingerprint of a killer whale is to look at another type of variation in DNA called single nucleotide polymorphisms (SNPs) which were explained in a previous post. Rather than differences in the length of DNA like microsatellites, a SNP is a difference in a single letter of the DNA code. In order to figure out the location of these SNPs, the killer whale genome needed to be sequenced, and from multiple killer whales. This used to be very expensive. When the human genome was sequenced 20 years ago it was a major four-billion dollar undertaking and took 13 years to complete. However, DNA sequencing technology has advanced rapidly in the last few years, becoming faster, cheaper and more accurate. We can now sequence an entire genome for a few thousand dollars in just a matter of days.

Using the known DNA sequence of the killer whale genome, we know where to look for regions of variability (SNP’s) and can use our in-house sequencer to quickly look at the DNA sequence of these regions. Amazingly, our DNA sequencer is about the size of a chocolate bar – 20 years ago the machines needed to sequence that much DNA would have filled entire rooms! 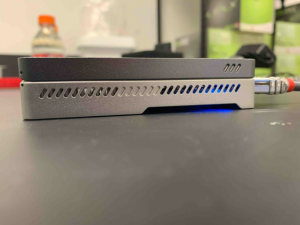 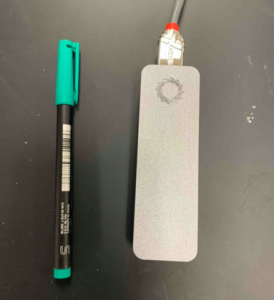 Now we can take DNA samples from up to 50 killer whales at a time, and in just days have DNA sequence information from each whale. This information is sent to a software package which gives us unique genetic fingerprints for each whale. This lets us do paternity testing, match killer whale poop samples to their “owner” and look at how diverse the immune system is in different killer whale populations to understand their resilience to disease. In most cases we can go from poop samples to genetic fingerprints in about a week. For more simple jobs like identifying the species of an unknown sample or figuring out which population a deceased marine mammal is from, we can have that information in a matter of hours.

We have a number of conservation research projects ongoing in the Marine Mammal Research Program at Ocean Wise aiming to make real positive change for our oceans. DNA is a part of that picture and can help us gain a deeper understanding of what is happening in our oceans. Whether it’s figuring out which killer whale a poop sample is from that is showing high levels of stress hormone, or tracking who the father of a new killer whale calf is, the conservation genetics lab is on the case.

To learn more about how you can support our killer whale research by symbolically adopting a killer whale through our Wild Killer Whale Adoption Program, please visit www.killerwhale.org.